Who the experts are tipping will come out on top this season.

Well here we are again, sitting on the cusp of the opening round of the 2017 Motul MX Nationals and preparing ourselves for another five months of drama, twists, bar-banging, roost and upsets. With round one being held at Wonthaggi, VIC, this weekend, we’ve spoken to a bunch of guys with their fingers on the pulse to find out who their hot tips are for the MX1 and MX2 championships. Josh Coppins (Altherm JCR Yamaha manager and 2012 MX1 champion):
MX1 – My picks are Dean Ferris, Kirk Gibbs and Todd Waters in that order. Ferris obviously won last year and he has the fitness and pace to go back-to-back. If he can eliminate the mistakes we saw last year and in New Zealand, he can be dominant, but that’s up to him. Kirk’s coming off a big injury and will gain momentum through the season, but by then Dean would’ve had the jump on him. With Todd, I feels he’s jumped out of the frying pan into the fire when he switched teams. I don’t think the bike or team will be ready for this weekend and he doesn’t yet have the top few percent to make a champion. He hasn’t been able to win a title on any brand bike he’s signed with and he hasn’t had the experience of managing the pressure of a championship, which is a big, big thing.

MX2 – It’s a hard call with a lot of new, unknown kids, but I’m going to go with Wilson Todd, Luke Arbon and Hamish Harwood. Todd will be always be fast and a threat, but he’s struggled with inconsistency in the past and could have issues with arm-pump. I still think he has what it takes ultimately to win the title though. Arbon definitely has speed and his starts are always pretty good and I think Harwood’s 250 two-stroke will buy him track position off the starts and that will set him up for good results for the season, although over a long season, racing two classes will hurt him.

Adam Bailey (AUS-X Open event director):
MX1 – From what I’ve seen it’ll be hard to go past Dean Ferris for first place and Todd Waters for second in the championship. Those two will go head-to-head again, even moreso than last year I reckon. For third it’s a toss-up between Kyle Peters and Kirk Gibbs. Gibbs didn’t do supercross, so it’s easy to forget him, but he’s such a gun and will fight for wins. I think Peters might edge him though, especially as he’s had a lot more race-time with the AMA Supercross championship.

MX2 – Jackson Richardson would be my first pick, with Wilson Todd second. I talked up Dylan Wills last year, but I really like what he’s bringing in 2017. He’s a good dude who works hard and I’m picking he’ll be a dark-horse top three, for sure. 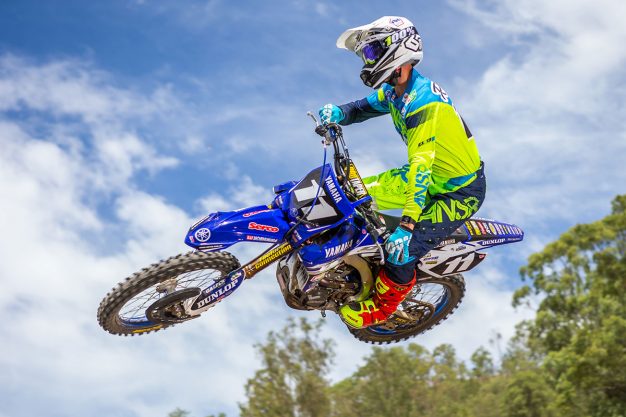 Kevin Williams (Motul MX Nationals promoter):
MX1 – It’s too big a call for the championship, but I believe this weekend will be Dean Ferris, Kade Mosig and Kyle Peters. Ferris did well in New Zealand, is very focused and has a vision to get back to Europe or the States again. After the brain-fade we saw in Perth last year we saw things change at his CDR Yamaha team and they’ll grow with that. I’m picking Mosig for second because it seems whenever he steps away from a factory team he seems to find two seconds a lap, plus Wonthaggi’s his home round and he’s done well there before. Kyle Peters did well at Toowoomba last year, but this time he isn’t here on holiday. He’s here to do a job and we’ll see that in his riding on the weekend.

MX2 – My picks are Kyle Webster, Wilson Todd and Jackson Richardson. I think Webster has an enormous amount of ability and has adapted well to a 250F. He’s grown the past two years and I expect to see him on the podium every weekend. As we’ve seen from Wilson Todd in the past, he can be very quick and I think a track like Wonthaggi will suit him. Then Richardson, he ran Mossy’s pace a few years ago and is very strong both at supercross and motocross. His overseas experience should put him in a good position this weekend.

Joe Stevens (NRGTV commentator and MAD Peter Stevens Racing Team manager):
MX1 – I think Dean Ferris will win again, for the fact he has momentum. He won last year, hasn’t had an injuries, surprised people in supercross, had wins in New Zealand and had a great pre-season hit-out there. Second and third will be tough. I’m picking Kirk Gibbs and Todd Waters, but I’m not sure on the order. Todd’s got the best opportunity to get it done with Honda building a team around him that will work and there’s no doubt he’ll win races. Gibbs has great consistency and will take moto wins when he can, but I don’t think he’ll have the raw speed of Ferris and Waters, especially early on.

MX2 – I’m picking Jayden Rykers for first because he’s a year more experienced, has a good bike under him now and the kid’s hungry. He wants it and I think he’s mentally ready to step up. Wilson Todd is probably faster, but maybe isn’t quite there mentally and I’m picking him for second place. For third I’ll throw in Jackson Richardson. He’s a bit unproven in motocross and everyone knows him as a supercross guy, but he’s raced the AMA nationals and that experience will count, as will the fact he’s back home and on a great bike.

Kale Makeham (2013 MX2 championship runner-up):
MX1 – I think the championship is Ferris’ to lose. From what I’ve seen he’s been on it all off-season and did well in New Zealand, as well as entering the championship fit and healthy. Waters is my second pick, as he’s always a solid rider, but has had a few bike changes lately. Now that he’s back working with Jay Foreman I think he’ll do really well as those two are comfortable working together and that makes a big difference. I’m picking Kade Mosig for third, because he gels with the Yamaha and a good performance at his home round this weekend will set him up well for the season.

MX2 – It’s a 50-50 call between Jackson Richardson and Wilson Todd, but I think I’ll go with Richardson for his overseas experience and his ability to deal with pressure. Last year was Wilson’s first MX Nationals and he won the second moto, so he has a heap of natural talent and raw speed and I think he’ll be up there. I’m picking Jayden Rykers for third. He was really consistent last year, but DNFs cost him. He’s shown though that he can charge from the back of the pack and get good results despite what’s thrown at him. The top three in the class from last year have all moved on, so I like his chances of moving up the rankings. Simon Makker (MotoOnline.com.au contributor):
MX1 – We’re in an unusual position this year with so many unproven riders coming into MX1. As well as the likes of Aleksandr Tonkov and Kyle Peters, Brett Metcalfe’s coming back in under the radar and we all know how quick he can be. My top three would be Ferris, Waters and Metty. Ferris has his tail in the air at the moment and will be race-ready after battling Waters and Cody Cooper in New Zealand. Waters still seems to be coming to terms with his team and bike and that could see him have a slightly slower start, but should build through the year. Metty is Metty. He’s a tough bugger, knows how to win races and has more experience than anyone in the paddock. He’ll use all that to his advantage and fight for wins all season.

MX2 – Bit of a tricky class to pick, this one. I think we’ll see a lot of different race winners, but it’ll come down to consistency. To that end I’m picking Jackson Richardson for the W, purely because of his race experience overseas and having the backing of Serco Yamaha. After a couple of decent years of growing and gaining pace, I think Jayden Rykers will be a shot for second place. He’s a talented kid with plenty of pace, and with the guys ahead of him last season getting promoted, he’ll shuffle up the ranks. For third I think Hamish Harwood will surprise many, especially early on, but I think he could run out of steam towards the end of the season if he continues to run both MX1 and MX2 classes. If he focuses on MX2 solely after a few rounds, he could get a bit of a bolter.

Alex Gobert (Foremost Media director):
MX1 – It’s difficult to look past the Dean Ferris and CDR Yamaha combination for the crown again in 2017, so I’ll have to go with the defending champion going back-to-back. Aside from that, Kirk Gibbs was extremely impressive last season and I’d say he will be number two again and Todd Waters will be P3 – identical to last year. Of course, the likes of Brett Metcalfe, Aleksandr Tonkov, Kyle Peters, Luke Styke, Luke Clout and Nato Crawford all incoming for the full season could result in all kinds of ‘surprises’ when the final chequered flag falls at Coolum.

MX2 – I’ll go with Jackson Richardson here, as the current SX2 champion takes on the nationals with Serco Yamaha. It’s so hard to split the leading guys in the 250 class this season because of the mixture of experience, but for second I will say Wilson Todd and third Jayden Rykers. Realistically, there are a lot of guys with a tonne of potential in the field and it’s going to cause for some spectacular racing throughout the season with, again, some surprises to arise.

Adam Spence (Foremost Media production manager):
MX1 – Dean Ferris is the man to beat in the premier class for 2017, the guy is super solid aboard his CDR Yamaha YZ450F and he’ll carry a tonne of momentum into the upcoming season. His job won’t be made easy though, Kirk Gibbs will be right there pushing to regain the number one plate, but I just feel that the defending champ will be too hard to overcome. Alongside Gibbs there will also be a list of tough contenders such as Todd Waters, Brett Metcalfe, Luke Styke, Kyle Peters, Aleksandr Tonkov, and Kade Mosig, to name a few, that will certainly be right there pushing for round wins.

MX2 – I believe it’s Jackson Richardson’s championship to lose in 2017, he’s my pick for multiple reasons. The Queenslander has a whole lot of experience from his American racing background and he’s been around the blistering pace of some of the world’s best 250 four-stroke racers for quite some time. He’s also just plain fast and he works hard, combine these with a strong team in Serco Yamaha and a very capable machine, he’s going to be tough to beat. Riders such as Wilson Todd, Mitch Evans, Kyle Webster, Jayden Rykers, Dylan Wills and more will also be right up there, but I believe Richardson has the experience, knowledge and maturity to bring home the number one plate.