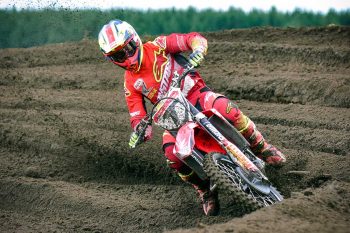 Todd Waters has aligned himself with Showa in Japan for 2017 in an exclusive deal that will see the Crankt Protein Honda Racing newcomer sport a complete ‘A-kit’ suspension package for the upcoming season.

After spending much of his pre-season aboard Jay Foreman-tuned Showa production suspension, Waters recently made the switch to the new equipment just weeks out of the 2017 Motul MX Nationals season-opening round.

“I’ve got the opportunity to run their suspension this year, which is an A-kit setup,” Waters told MotoOnline.com.au. “It’s super cool and good for us, it’s only new, so we’re still developing it but our team manager Jay Foreman is our suspension technician and he’s pretty stoked to be working with them too.

“I’ve done this deal personally, it’s a deal between Showa Japan and myself. It’s a really cool thing that I’ve got a connection in Japan with Showa and it’s a really good thing for the future as well – I’m lucky that Honda are happy to let me do that. One of the perks of racing the world championship is that you meet people, so it’s a pretty cool thing.”

The MX1 front-runner has chosen to run with his preferred spring fork option for 2017, his decision being based around the consistency of the traditional system in comparison to the more recent air systems.

“For me, we’ve always raced with spring forks and last year with Suzuki was my first time with air,” said Waters. “It’s just quite a hard thing to get right and I just like the spring fork because it’s pretty standard across each track,

“It’s a lot more consistent, the air seems to change a lot, you would get it handling really well and then head to another track and it would feel completely different.”

Debuting his new Showa deal at round three of the 2017 New Zealand Motocross Championship last weekend, the Queenslander is confident in his progress with the equipment and looks to continue building on their base settings throughout the season.

“We’ve got it handling reasonably well and it’s a good base setup for us at the moment,” he explained. “That’s why we’re over there in New Zealand, and not only is the suspension new, but we’ve got a new team, new bike, everything is new.

“Obviously with the Honda being a new bike, things were coming out later, so we are behind the eight-ball in that respect, but we’ve got a good setup and we’re three weeks out. We’ll get the ball rolling and the last-half of the championship is our focus, that’s where it’s won or lost.”