Breaking down the dual for this year's AMA Supercross crown.

Now nine rounds into the 2017 Monster Energy AMA Supercross Championship we’re seeing two riders emerge as the hot title favourites in the 450SX category. Defending three-time champion Ryan Dungey currently controls the series lead and Monster Energy Kawasaki’s Eli Tomac is in hot pursuit as he shoots for his first title in the premier class. In this latest edition of Q&A, MotoOnline.com.au answers a selection of questions in regards to this developing title battle as two of the best supercross racers in the world continue to push the limits each and every weekend in a bid to hold that number one plate in Las Vegas on 6 May. 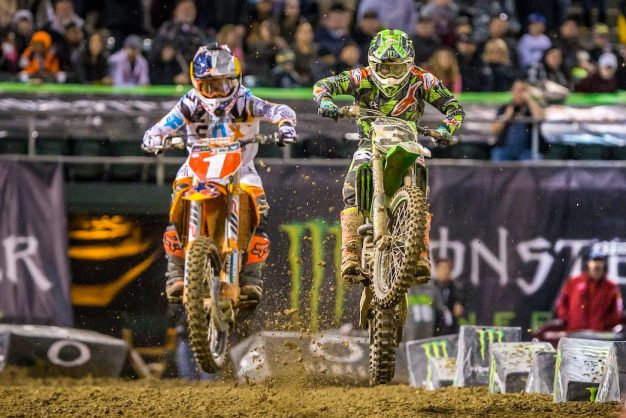 Q: Will varying levels of championship experience play a role in this title battle?

A: Ryan Dungey is clearly a more accomplished rider out of the two, and it will play a role in this championship battle as we see things starting to tighten up. Dungey has been there and done it when it comes to premier class titles, but in Tomac’s case, he’s yet to notch a 450SX title next to his name and that could mean many things. Aside from physically riding fast, it’s clearly a huge mental game out there and we’ve seen many riders over the years struggle with the pressure of a championship on their shoulders. Tomac is also known to push the limits at times, whereas Dungey is quite conservative and will not take those chances and risk going down.

Q: Should Dungey be worried about losing his title at this stage of the season?

A: Dungey should be worried, he’s got one seriously talented rider chasing him down and slowly chipping away at his points lead. Tomac has the momentum in his corner at this point of the season and doesn’t look to be slowing down any time soon, he also has logged twice the amount of wins as the series heads to round 10 this weekend. Obviously winning isn’t everything, but it shows that when things go right for Tomac, he can win quite easily and he has now shown that four times this season in comparison to Dungey’s two victories to date. Yes Dungey has a 24-point lead currently, but that’s really not enough when you have a guy like Tomac hunting you down with eight rounds remaining on the schedule.

Q: Are the 2017 circuits playing into Tomac’s favour?

A: With the new timed format, riders are literally turning more laps on the 2017 circuits than ever before, so this means that the dirt is breaking down and these tracks are really tough and technical. Dungey isn’t a rider who likes to hang it out and ride on the edge, even outdoors you rarely see the Red Bull KTM rider look out of control – the guy likes to keep his style clean and have everything under control. Now take a look at Tomac, he’s not scared to let it hang out and take a risk, his riding style also lends itself to a more loose and broken down circuit. Tomac tends to steer the bike from the rear more than Dungey and that style of riding suits a loose and less conventional supercross track much more than Dungey’s more traditional style. 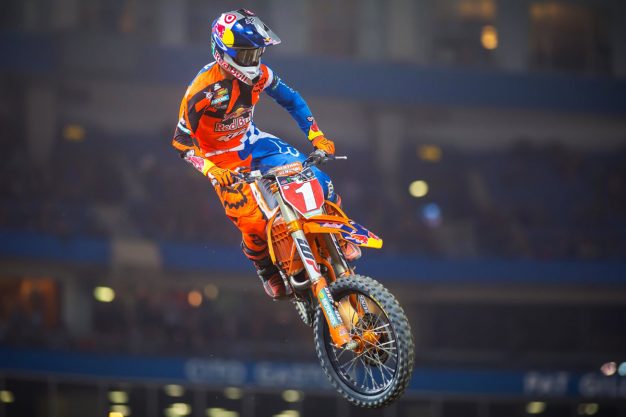 Q: Will the remaining rounds favour either rider?

A: There’s really only one round that stands out as a favourable location for either of these two, and that’s this weekend’s event in Daytona. The Daytona circuit is always super rough and one of the rounds that riders need to be loose, comfortable and not scared to push the envelope. It’s an awkward mixture of outdoor motocross and supercross combined, there’s nothing exactly like it and last year it was Tomac who led the 450SX main event from start to finish ahead of Dungey. The year prior Dungey did edge out Tomac for the Daytona victory, but it’s clear Tomac is now on a new level and he will be hard to beat this weekend in Florida.

Q: Who is the in-form rider at this stage of the season?

A: You would have to go with Tomac at this point of the season, he’s really looking great aboard his Monster Energy Kawasaki and Dungey quite honestly doesn’t look absolutely amazing right now. I mean, yes, the guy is an absolutely amazing motorcycle rider, but Tomac just looks better right now – plain and simple. In saying that though, Dungey just continues to be the consistency king in 2017 with his average finish coming in at 2.2 in comparison to Tomac’s 4.4 average. Tomac did have a shocking round in Arlington though as he was forced to have his front brake cable cut in order to finish out the race, he came home in 15th position and took a huge blow to his title run and his average finish score in the process.

Q: Will this battle go down to the final round?

A: Yes, definitely. Providing both riders remain healthy right through to Las Vegas, this battle will continue to wage on for the remainder of the season. Dungey will be right there on the podium and shooting for wins every round, and you can bet that Tomac will be pushing the limits in order to bridge that points gap to give himself the best shot possible at this title. It’s going to be an exciting battle to watch, and we can’t forget riders such as Marvin Musquin, who has a win to his name this season, that will surely play their role in the battle. Could we even see some team tactics come into play later this year? It’s highly doubtful, but you really never know!