Injuries are a large part of our sport, nobody likes to talk about it, but it’s just something we have to accept in the sport of motocross. Each and every one of us will get injured at some point in time, so how exactly should we approach the injury and what are some of the key things to focus on during the recovery process? For this latest edition of Advice, MotoOnline.com.au checked in with MX2 front-runner, Dylan Wills, to get his take on dealing with injuries correctly. 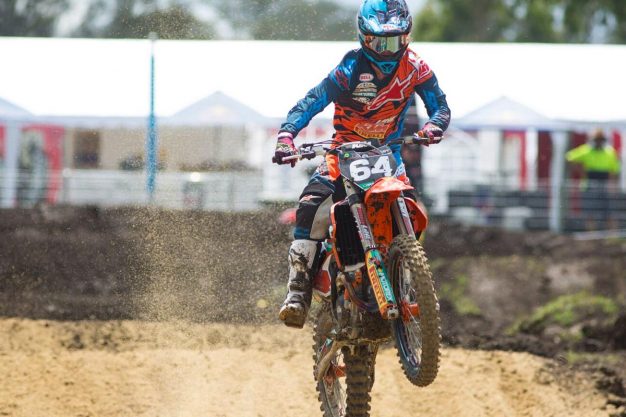 1. The mental aspect:
The best way for me mentally to deal with being injured is to actually keep myself at tracks. People want to ask you a lot of questions and it gets annoying at times, but I’ve found the best thing to do is to stay at tracks, watch your mates ride and kind of learn from it all. I spent a lot of 2013 and 2014 injured, but I spent so much time going to tracks with Matt Moss and Jay Marmont, so I felt like when I got back on the bike I had learned new things. Mentally that was better for me, I felt like I knew what I was doing as soon as I got back on the bike because I was always learning new things watching these guys ride. I think staying in the game is a bit thing, a lot of people venture away and go do other things, which gives you a lot of time to think. For me I think staying around my motocross mates has been the best way to keep my head screwed on and in the game.

2. Getting the right help:
We have RaceSafe at the track and they have always got their suggested doctors to go to, and they’re usually the ones you want to go to. They are really good, and even your local GP will know who they are. But I do always make sure I get a second opinion, that’s the biggest thing, we always go for a second opinion, even if it costs money. It’s never a bad thing to hear someone else’s thoughts on what is going on. For me, getting the right help is massive, it’s always hard doing so through the public system, so it’s definitely better going the private route. I know it costs a lot of money, but if you want to do it right, that’s the way to do it.

3. When to return to training:
Depending on the injury, there’s usually a timeframe of around three to four weeks where you have to keep whatever you’ve damaged really still. It all depends on the injury, but for me, I broke my scaphoid at the AUS-X Open, had it screwed back together and I was back training within three weeks. I’ve just been doing minimal lower body stuff, but the difference for me was that I broke it going into the off-season with no rush to come back. I spent a little bit of time just hanging out with mates and things like that, then I slowly returned to training. There’s always a different timeframe for every bone, but good doctors and surgeons will always give you the right advice for when to come back. 4. Getting creative:
It’s obviously massive to make sure you don’t involve the injured part of your body in the training, but I’ve been doing a lot of stationary riding, squats, leg workouts, all of that kind of stuff. I’m doing that to build myself up, so when the time comes I am ready to ride and I’ve got a good base fitness level – I’m not just getting back on the bike at square one. You need to be creative in your training, and you also end up learning new exercises because you have no other choice. This can be good for your training, I’m doing things now that I’ve learnt and plan to use when my wrist is fine. It’s vital to be creative with your training when you’re injured, the repetitive aspect can get a bit boring because you can’t do much, but you’ve just got to do it.

5. Returning too soon:
If you’ve got a guy battling for a championship and he breaks something, obviously he’s going to go out and try to fight for that championship. It’s tough, if you break something and you’re not battling for a championship, a lot of people want to come back and be a hero or that tough guy. At the end of the day, I think those people are slowly ruining their careers. You need to give injuries the time it needs so you can get back on the bike and actually go forward with your riding. I’ve seen it happen with a lot of guys where they will break bones and try to come back, or do the wrong thing in their recovery, then they suffer from it and you see them go downhill. I think treating it right is massive, but then again, if you’re battling for a championship what are you going to do – you’re not just going to sit on the couch.

6. Back on track:
You need to ease back into it, 100 percent. I’ve been there and done it. I shattered my heel during 2013 and on my fifth ride back I was just pushing way too hard. I was 18 years old, trying to ride flat out all the time and I just wasn’t using my head. I crashed and broke my leg on the same side and I’ve had dramas with that leg for a long time, it’s only in the last year that it has come good. So I’ve learned first hand from that, I haven’t done it since and I’ll never do it again, I will always cruise back into it. You should start off with turn track stuff and not get involved in stupid races at the practice track with some idiot. It’s massive to ease back into it following an injury, it’s just crazy how people don’t learn from their injuries. People come back and try to ride at the level they were at before they got hurt – it just doesn’t work.