A look back at Dungey's championship-winning ways.

Ryan Dungey is undeniably one of the greatest motocross and supercross contenders in history, with a smooth and technical riding style, clean-cut presentation and a long list of impressive results, the 27-year-old is hot property. As the 2017 Monster Energy AMA Supercross Championship kicks off, the Red Bull KTM rider is once again right in the thick of things battling for the 450SX title, which would be his fourth – third-consecutive – crown if he can bring it home in 2017.

How does he do it? Why is ‘The Dunge’ so successful in a field featuring a selection of the fastest racers on the planet? There’s obviously a tonne that goes into his program including an intense training program and a seriously high-calibre team headed up by Roger DeCoster. Those elements are a formula that will vary between riders and not one exact situation will suit everyone, but there is one aspect of his program that everyone is searching for, consistent results. 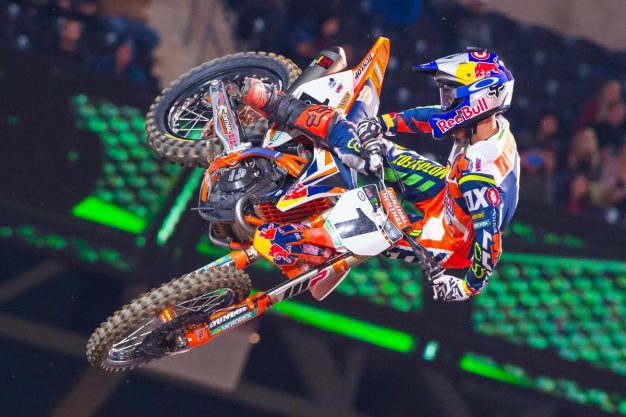 When we say consistent results, we mean really consistent results. Dungey’s consistency is seriously impressive, did you know he slipped off the 450SX podium just twice in two whole seasons? Dungey landed himself on the podium in 32 out of the 34 supercross rounds over contested over the 2015 and 2016 seasons – that right there is how you win championships. Although it wasn’t always continued consistency for Dungey, he has worked towards perfecting the skill in recent years and looks to be furthering the trend in 2017.

In his rookie 450SX season back in 2010, Dungey, then part of the Rockstar Makita Suzuki team, still claimed six wins throughout the season, but his consistency wasn’t on par with recent years. It was a baptism of fire for the young racer at that stage of his career as he entered the premier class with the likes of Ryan Villopoto, James Stewart, Chad Reed and Kevin Windham (who claimed second that year) all looking to take home the title. Villopoto did bow out of the championship with a badly broken leg at round 14 in St. Louis, but once again, Dungey was consistent, injury-free and he deserved it.

Team Honda HRC’s Ken Roczen currently leads the premier class points chase by six points over the KTM pilot after two rounds of racing. The German definitely claimed a dominant round one victory and that started the talks of a Roczen whitewash for 2017, but if you take a look back, Dungey is quite used to being beaten at the season opener. In the three seasons Dungey claimed the 450SX championship, he did not win the opening round, in 2010 he was second, 2015 he was fourth and 2016 he was second once again. Seeing a trend here? 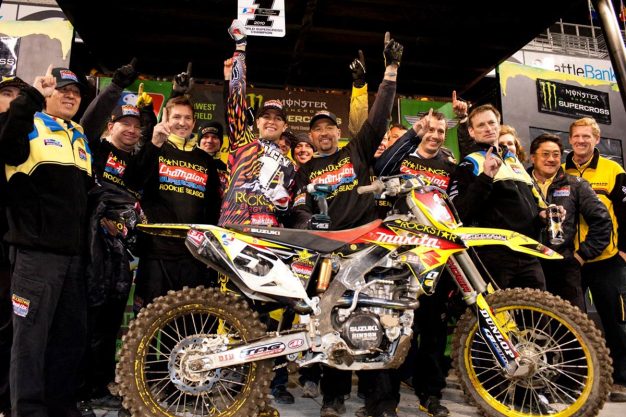 Roczen could well and truly claim this title, there’s no doubting that, the guy is absolutely amazing on a motorcycle and a great personality within our sport, but it’s clear Dungey’s title-chase is actually going perfectly to plan. He picked up the pace at round two and really gave Roczen a run for his money, he’s ramping up his attack and may just continue his consistency program all season long. Dungey rarely makes mistakes, his worst days tend to be fourth place finishes, he’s not one to DNF or make a silly mistake and take home 10th place – it’s just not his style.

It’s not like Dungey is just claiming a whole lot of podiums either, his win-rate is quite high. In the past two seasons alone, where he claimed back-to-back championships, Dungey won 17 main events in total, that’s half of the races over the 2015 and 2016 seasons. The majority of those wins also came closer to the rear portion of the season, it’s just the way he goes about things it seems, stay consistent and build each week.

We’re sure in for an exciting 2017 Monster Energy AMA Supercross Championship, not to mention the upcoming Lucas Oil Pro Motocross Championship where Roczen now holds the number one plate following an out of character injury from the multi-time champion. Will Dungey’s formula pay off for 2017 or will Roczen be too strong for the defending champion to overcome? It’s hard to say at this stage of the season, but if history serves us correctly, Dungey is yet to find his stride and may just have something more to bring to the table.