Six performances and talking points from the opening round.

Anaheim’s opening round of the Monster Energy AMA Supercross Championship is always a thoroughly exciting event surrounded by a tonne of hype. Who’s been putting in the off-season work? How will riders fare aboard new machines? The list of scenarios and possible winners is very long every year and 2017 was certainly the same. As usual, the season opener served up a range of excitement, surprises and everything in between, here’s a few that stood out to us here at MotoOnline.com.au. 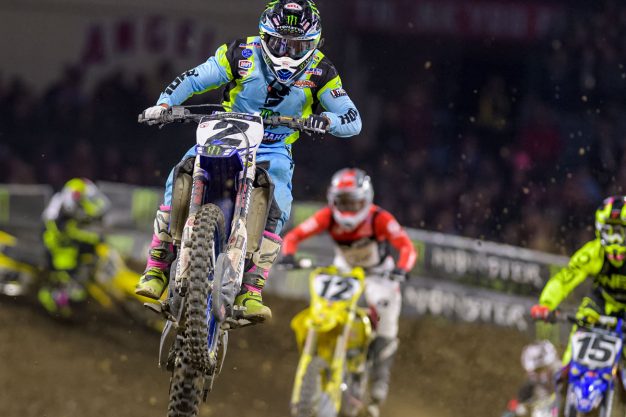 6. Dungey’s form:
On return from a cracked C6 vertebrae during the 2016 American motocross series, Dungey looks to be right back to his regular form. The guy is always right there and placing himself in great positions. Yes, he may have finished 16 seconds behind Ken Roczen in second position, but he now enters round two just three points behind the Honda rider. This is the way Dungey does business, he remains solid, consistent and brings home titles – it’s going to be an interesting year in the 450SX category!

5. Mellross’ luck:
After missing out on the 2016 Australian Supercross Championship in the SX2 category due to mechanical issues at the final round, Hayden Mellross definitely was looking to leave that bad luck behind. Unfortunately for the New South Wales native it looks to have followed him into the new year. Whilst running inside the top three during the 250SX main event with strong pace, Mellross suffered a mechanical issue forcing him out of the race, another heartbreaking moment for the talented Aussie.

4. Webb’s 450SX debut:
It’s always tough for 250SX stars to make their way into the premier class ranks with a factory ride and all eyes on them. For Cooper Webb, it was clear that the pressure did get to him on debut, and he admitted in post-race interviews that he did indeed tighten up and let the nerves get the best of him. Posting a 10th place finish on debut, it certainly wasn’t the worst result possible, but you can bet your bottom dollar the multi-time 250SX champion is ready to move up the ladder in the coming rounds. 3. Reed out:
It was quite an unfortunate season opening round for Australia’s greatest export. The hype around Reed’s 2017 season was certainly high and following connection with another rider, it was a huge anti-climax to see the dejected Aussie sitting on the sidelines due to mechanical issues. Reed now finds himself all the way back in 20th place in the 450SX standings, certainly not the way he had planned on kicking off his season.

2. McElrath arrives:
When it came to the Western Regional 250SX category, nobody was 100 percent sure who could come out on top at Anaheim 1 – just like the 450SX category, the quarter-litre class is filled with talent. At the end of the 15-minute main event it was Troy Lee Designs Red Bull KTM’s Shane McElrath who crossed the line first and claimed his maiden Monster Energy Supercross victory. Can McElrath continue this winning form throughout the season? Let’s sit back and find out.

1. Roczen’s Honda debut:
Ken Roczen entered the 2017 season with an all-new look as part of the Team Honda HRC squad alongside Cole Seely. With a completely new CRF450R for this year, and a totally unfamiliar team, many speculated to whether the German star could continue his impressive 2016 form. Main event time came around and Roczen quickly made his way to the lead and never looked back, it was a truly dominant performance as he crossed the line 16 seconds ahead of defending champion, Ryan Dungey.