Ficeda's Joel Ryan guides you through the set-up of roll-off systems.

With the recent confirmation of Motorcycling Australia’s controversial ban on tear-offs from 2017 onwards, it’s forced riders in all disciplines of motocross and off-road racing to make the switch to roll-off systems. Roll-offs can be a little tricky to install and maintain, so for this week’s Advice feature, MotoOnline.com.au has enlisted the help of Joel Ryan from Ficeda Motorcycle Accessories – the Australian importer of SCOTT goggles – to share his tips on preventing failure and ensuring your roll-off system is installed correctly. 1. Initial lens and canister preparation:
Firstly, ensure your lens is clean and dry before loading your film. It’s best to remove any loose dirt from the canisters or surrounding areas.The SCOTT Works Film System features a patented Anti Stick Grid. One of the major causes of film system failures is the film roll ‘sticking’ to the lens as it slides across. The result of a film sticking to a lens is generally a rider with a streamer of film flying behind their helmet. To prevent the film from locking on the lens, there needs to be some space between the film and the lens. SCOTT’s Anti Stick Grid allows the film to sit off the lens by running on the clear plastic grid, while the built-in mudflap stops any dirt from getting between the lens and the film. Old designs required a roll-off specific lens, often with raised dots moulded on the lens to prevent the film from sticking. The new grid system provides an unobstructed window to look through, and also allows flexibility for the rider to interchange the grid onto any tint or lens variation they wish to use. 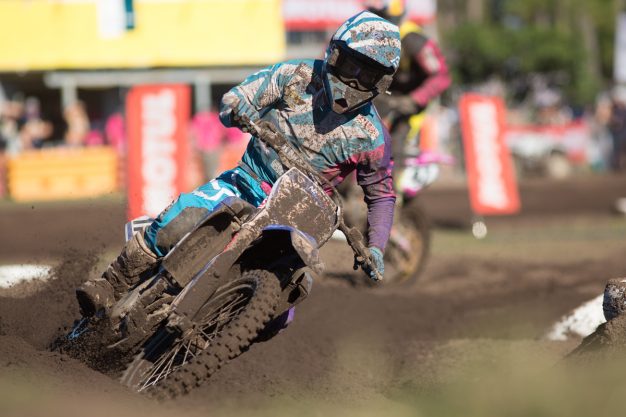 3. Failure prevention:
There are several main causes of malfunction of film systems. The most common are: Mechanical lock of the film roll against the lens. On a standard lens with no anti-stick prevention, the film roll can lock solid on the lens, eventually causing the canisters to be pulled apart resulting in a long streamer of tape trailing behind – hot and humid conditions can really increase this problem occurring. Solutions include using an anti-stick SCOTT grid lens, a ‘dotted’ anti-stick lens or similar system to allow some gap between the lens and film roll. The second main cause is the motor side becoming overfull and jamming up. As the used film rolls up on the axle in the motor side canister, it grows in size as it drags in dirt each time you pull your cord. In heavy roost and sand, this used film can expand too much for the size of the canister eventually jam up inside the canister. This can be prevented by ensuring you either start the race with a fresh film or cutting any previously used film off. Finally, the third main cause is flying debris. A direct hit from a large rock or heavy roost can certainly cause damage to a film system and even open a canister. SCOTT’s new 50mm Prospect film system tucks the canisters behind the goggle strap and outriggers to help shield the canisters from wayward rocks. Also, when washing the film system, avoid getting any water into the string/motor mechanism to prevent it from failing.

4. General maintenance between rides:
It’s recommended to remove the film system from your goggles and clean after each ride to remove any loose dirt particles. Wash the lens and canisters with the film roll removed and ensure not to get any water into the motor side canister. If you find you’ve only used a small amount of the film roll, simply take the film out and remove any dirty film but cutting the film, the shorter film roll is now ready to re-load.