It’s the model everyone has been talking about for quite some time – the 2017 Honda CRF450R. The excitement around this bike has been substantial since we first saw spy photos of the pre-production model and this week we had the opportunity to ride it at the Australian media launch, held at Ranch MX in New South Wales.

The previous Honda CRF450R certainly wasn’t a bad machine. It was quite good and a favoured model by many riders, but it was time for Honda to refresh its flagship model and really raise the bar in terms of its 450cc motocross technology.

Honda certainly came through with the goods in terms of refreshing the CRF450R with the release of a completely new bike. From the ground up Honda has redesigned the bike for 2017 with updates across the board. With all of this excitement and build-up around the model, did it live up the hype? Did Honda nail it and put together a serious MX1 contender heading into the new year? Read on to find out!

Obviously the most noticeable change to the model is the overall look, right away the updated bodywork catches your eye. The 2017 CRF450R looks really, really good right out of the box and the overall styling of the bike is super-sharp. In the looks department Honda have also added in-mold graphics for 2017, these are a great addition to the model and will keep your pride and joy looking fresh for longer. 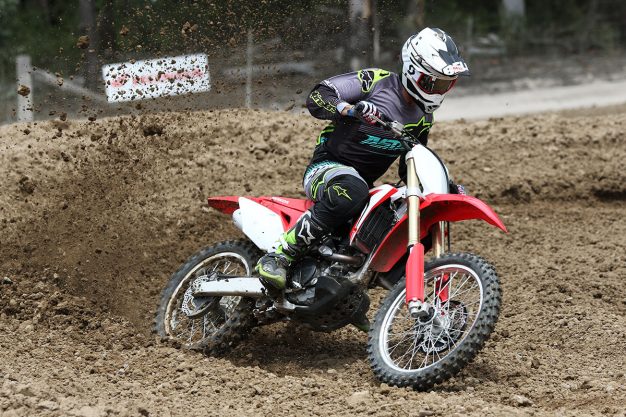 New bodywork is great, but how does it feel and function? The design and shape of the bodywork is very streamlined and at no point in time did I find my boots catching on anything. Riding the previous model, I did have issues with my boots catching on the shrouds, but for 2017 there’s no sign of that, which is a huge improvement. Another great feature is the flatter seating area, which was created thanks to the all-new ‘next-gen’ frame design.

The new twin-spar aluminium frame has been designed to position the rear shock’s mounting point lower, opening up the air-box area and lowers the centre of gravity. The new frame geometry also helps improve traction, feeling and steering precision. Overall the new frame design is a big winner in my eyes as it covers all of the bases. Improving both the riding position and handling characteristics of the bike – what more can you ask for?

To further lower the centre of gravity Honda also updated the 2017 CRF450R twin-muffler system. The system is now more compact and positioned closer to the frame’s centre to take weight away from the rear end to improve handling. It also allows for more air-flow to compliment the updated engine package to increase power.

Another awesome feature for 2017 is the titanium fuel tank. Focusing on weight reduction and centralising of mass, the new CRF450R now features a lighter and stronger tank design. The titanium unit still maintains the same fuel capacity as the previous model for those long motos and is protected by a plastic molded section. But don’t worry, there’s a nice little window in the plastic section to show off that rad tank on your new ride. 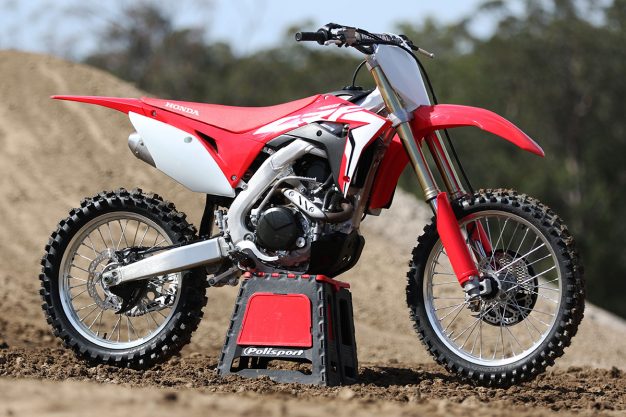 Obviously a huge factor when it comes to chassis design is the suspension and for 2017 Honda has opted to revert back to a spring fork. After multiple years on air forks, we now see a 49mm Showa spring unit fitted to the front of the CRF450R. The air/spring debate could go on for days, and to be honest, I’ve been fans of both styles in the past on certain models. But for 2017, the spring forks definitely suit this bike and the front-end feel is great.

The combination of the all-new frame and the Showa 49mm spring fork is a strong combination. I initially hit the track with 101mm of rider sag in the rear-end and standard fork settings, which gave me a very balanced feel and felt great right away. In the end I found my most favourable setting to be those same specs, but with the forks pushed up through the clamps slightly.

As you would know if you’re a regular MotoOnline.com.au reader, I’m all about front-end feel, so for me, that extra front-end feel, due to the movement of the forks in the clamps, really made the 2017 CRF450R feel perfect for me. It’s such a balanced bike and the way it turns is something Honda engineers should be very proud of. 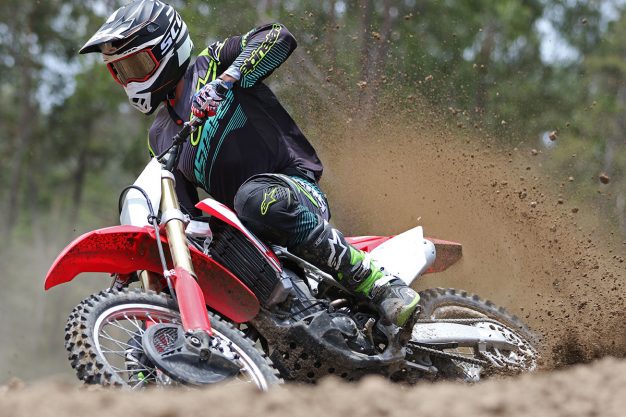 The Honda CRF450R has always been known as an impressive turner, and it was something I hoped they would continue on for 2017. So for all of you die-hard Honda fans out there who love the way they turn, you’re in for a treat for the new year with this bike. I would have said it’d be quite hard to beat the turning of the previous model, but they have proved me wrong and done just that!

The 2017 Honda CRF450R is an all-new model, so we’ve also been treated with an updated engine package. Part of an entire engine overhaul, the 2017 CRF450R now features a new downdraft intake tract and fuel injection body. In addition, a new cylinder head layout is also featured using a new ‘in-finger’ rocker design and the compression has been raised to 13.5:1. The result? Improved combustion efficiency and more power.

In previous years the Honda CRF450R has been slightly lacking in the power department, but it has always been such a smooth and user-friendly machine at the same time. With more power being reported for the 2017 model, I was hoping the bike would remain smooth and user-friendly and that it did. It’s definitely a whole lot faster through the range, yet the 2017 CRF450R continues to be, in my opinion, one of the easiest 450cc motocross bikes to ride. 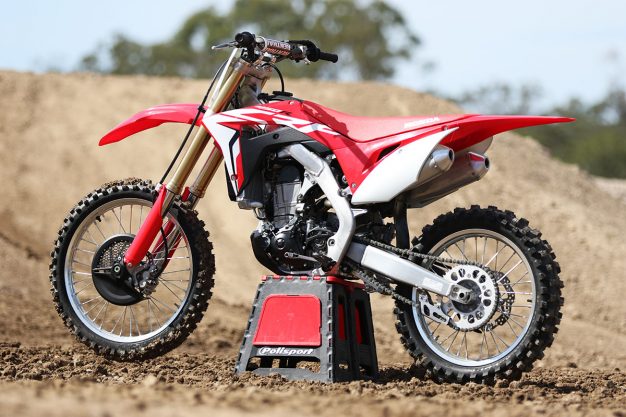 With an all-new engine and a boost in power, Honda has also added the engine mode select button for 2017 to allow riders a choice of mapping with the push of a button. You can choose between, standard, smooth and aggressive settings depending on track conditions or rider preference. I opted to stick with the standard setting personally, but it’s definitely a personal preference feature and it’s great to see it offered standard for MY17.

Another awesome feature for 2017, although not offered as a standard option, is the electric-start. Right off the showroom floor the 2017 Honda CRF450R comes with a kick-start, but if you’re a fan of the magic button, you can see your local dealer and purchase the electric-start kit. On those hot summer days, or in a racing situation, the option to use an electric-start is really handy.

Overall the 2017 CRF450R is one thoroughly impressive bike. New from the ground-up and with features such as Dunlop MX3S tyres, a 260mm front disc and a factory skid plate as standard, this bike is ready to go right off the showroom floor. The $11,999, be sure to head to your local dealer to check one out when they arrive this month and visit www.hondacrf.com.au for further information.