Rush Adventure Tours are based on the south coast of New South Wales, more specifically in Batemans Bay. The company has been operating trail tours for the past 16 years all over the east coast of New South Wales and down into Victoria. Rush Adventure Tours is the brains behind the famous Seven Deadly Sins tour, which I was lucky enough to take part in a few years back, marking one of the best experiences of my trail riding life.

Rush Adventure Tours is headed up by Lindsay Bond, Karl ‘The Rock’, Joe, Cam and Jamie. All who maintain a wealth of trail riding knowledge and of the extensive network around the south coast area of New South Wales. Earlier this year Sherco came on board and sponsored the team at Rush Adventure tours, which is not only great for Rush, it also showcases the French manufactures range to everyone on tours. It allows them the opportunity to ride and test out the Sherco brand back-to-back against their own pride and joy. When the opportunity to tag along with 15 others on the Rush Adventure Xmas tour, I jumped at it – all I needed was my riding gear, tooth brush and my camera. Sherco and Rush Adventure tours had a fresh SEF-R 450 ready and awaiting to be shredded on some sweet Batemans Bay single trail.

On day one, we started right from the backyard of Batemans bay up through the Benandarah State Forrest, Monga State forrest and finishing up 150 kilometres later in Majors Creek at the Elrighton Hotel. Day two started from the Elrington Hotel as we headed back down through Araluen, Monga National Park, pork chop hill, Mogo and back to Batemans Bay.

The morning started along a 300-metre mixture of lazy tar and dirt, straight down a short hill and into 400 metres of tight fire trail, while we were then introduced to some brand new single trail, which almost seemed like the most taxing part of the day. After the morning shake down, Lindsay and the boys led the charge through Benandarah State Forrest on some of the fun and rewarding single traild between the Princes Highway and the Kings Highway, before stopping at Nelligen Creek for lunch and some fuel. Following lunch, we headed a littler further up the Kings Highway before turning back into the bush and making our way to the Monga State Forrest on a mix of fire trail and single trail. The trails were situated in some dense bushland, and after a few creek crossings later, we only had one bike being flung to the safety of the bank on the other side, with the rider going well out of his way ensure his boss’ three-hour old trail bike didn’t get drowned on its first outing. We headed up the steep mountain into the Monga Forrest on a mixture of single track and fire trail, leading us higher and higher through some thick cloud towards Araluen and onto Majors Creek for the evenings Christmas party and festivities.

Majors Creek is a small one street town situated not far from Braidwood, consisting of a few houses and a pub with accommodation that features an old red rattler that has been transformed into a bunk house. It sleeps 12 people, as well as some more flash rooms with a shorter stumbling distance from the bar. Being the end of year Christmas ride, Rush Adventure Tours and some of the usual tour trail renegades were set upon the Elrington Pub to let their hair down and party on into the night.

Saturday morning kicked off a little slow for some, but not as slow as the support crew who obviously didn’t use up enough energy the day before. After a quick photo infront of the pub, we headed back out to Araluen to get our minds back in the game with some fun fire trails and plenty of water bars, plus a little bit of single trail before we headed off back down the hill towards Mogo and the infamous pork chop hill, which resembles more of a mild rocky cliff face than a hill. 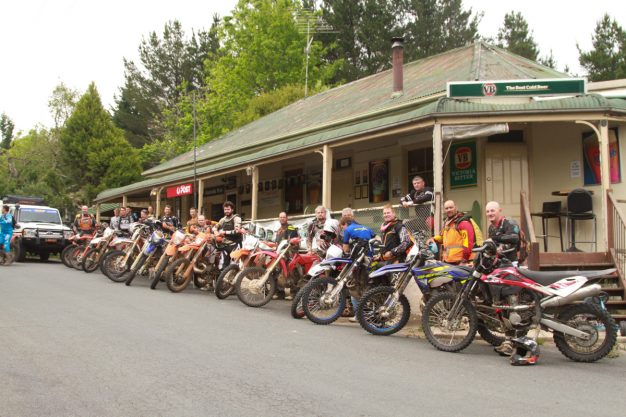 A couple of attempts were made by the crew, making it a little under halfway. Reluctantly, Lindsay gave it a run and made it up which looked far easier than the route he took to descend back down, as that looked a lot closer to pointing down hill and hoping for the best. After lunch at the near by pump house on the river just outside of Mogo, we got on some fun single trail before cruising back into town.

Some of the crew split up and went back to the hotel where we started on the Friday, while those who hadn’t quite had their fill continued on into the bush for some more single trail on the way back to the finish. All said and done, we completed 300 kilometres over two days on some of the most amazing trails you can hope to find on the south coast of New South Wales.

New friends were made, great times were shared and there was enough seat time to really appreciate the time you get to spend away from the city or the normal grind. Lindsay and the team are easy going and really know how to make your life hassle free, all you need to do is turn up and twist the throttle, dodge some trees – they have the rest of it covered. 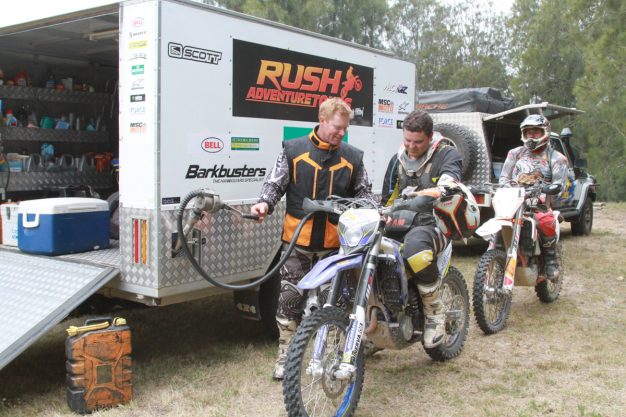 Rush Adventure Tours have all the expertise to get you into as much trouble as you can handle, and enough experience to help you out of it. All trail tours are catered for with lunch showing up ready and waiting by the support crew, who get around by four-wheel-drive vehicles and can lend assistance to anyone with bike troubles, which also doubles as a fuel stop on the longer rides, while the ‘Rock’ will charge you a six pack of his choosing on the day to change a flat. Rush Adventure Tours cater for all skill levels and can adapt every ride to the ability of the riders.

Rush Adventure Tours have a number of over night tours as well as The Seven Deadly Sins Tour planned for April 2017, make sure you get in early for the that as they book out early. If you’re interested in some coaching to gain greater skills out in the bush, they can also help you out there. For more information, visit www.rushadventuretours.com.au.