It’s been another big week here at MotoOnline.com.au with our second day of 2017 KTM motocross range testing going down on Tuesday at Appin in New South Wales. This time though, it was my turn to jump on the two-strokes! It’s awesome to see KTM pushing on with the development of their two-stroke motorcycles and the 2017 range is just another notch in the right direction.

Obviously you’ll have to wait for the reviews on both the 2017 KTM 250 SX and KTM 125 SX, but I can tell you now that they’re really great bikes packed with a tonne of features you guys will love. Once again, I’d like to say a huge thanks to the guys at KTM Australia for coming out and doing such a great job each day. Also, we had Guy Streeter on hand aboard the 2017 KTM 300 EXC two-stroke, so stay tuned for his thoughts on that one too!

Speaking of our days out at Appin, last week we saw American Kyle Peters hit the track aboard a Suzuki RM-Z450 in Thor MX gear sporting the number 14. Now we obviously knew this one was coming for quite some time, but it was rad to see Peters reveal the new factory Suzuki look for the first time and we released the news this week on the site. It’s awesome to see Peters sign with the Wilson Coolair Motul Suzuki squad for 2017, he’s another strong contender for the MX1 championship and he’ll be a welcomed addition to the series. He’s also a welcomed addition when it comes to media guys like myself, why you may ask? It’s something that people may not take into account, but it makes our jobs a whole lot easier when you’re dealing with user-friendly riders.

From day one when I shot both images and video for KTM Australia as Peters joined their squad for the 2016 Australian Supercross Championship, the guy has been a pleasure to deal with. Anything we need, he’s happy to get right to it and spare his time to allow us to create the content we’re after. The more riders we have in the series (and we luckily have a tonne of them already) who are happy to work with us to create engaging and high-quality content, the better.

That’s all from me this week, here’s Jeremy…

Only two weeks since the season has finished up and we’ve already had three major rider signings! Obviously Spence touched on the Peters signing, but how’s the Waters and Clout announcement that was revealed yesterday at the Moto Expo in Melbourne? Now Waters was heavily rumoured to be signed with the Victorian-based outfit, so that was expected, however the addition of Clout came as a surprise.

From what I understand, it’s all come together for the New South Welshman in just the last couple of weeks since the AUS-X Open. While it’s slightly disappointing to see him unable to lock in an international seat, I’m equally excited to see what he’s capable of in his rookie year in the premier category, and it will be interesting to see where he stacks up. 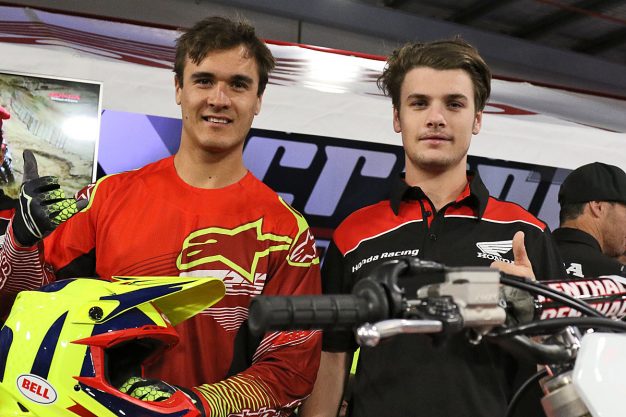 As for Waters, he’ll remain a serious title threat in both the motocross and supercross championships. It’s not the first time he has raced a factory Honda in Australia, although he will be aboard a brand new bike and will have no previous data to fall back on.

One of the more interesting things to come out this signing is the appointment of renowned team manager Jay Foreman – his experience and knowledge is going to be extremely valuable to the team and riders as they begin the development process of the new CRF450R.

To finish off, I published a review on the KTM 250 SX-F yesterday – I was considerably impressed with this bike and I’m an absolute fan of it. I say it in the review, but the new WP AER 48 fork is one of my standout features on the quarter-litre machine.