We highlight six standout riders in this year's championship.

The 2016 Australian Supercross Championship saw many riders meet expectations, and many that didn’t. With a host of impressive performers throughout the season, MotoOnline.com.au has highlighted six standout riders across both the SX1 and SX2 categories. 6. Jay Marmont (MXR&D Husqvarna):
When Jay Marmont announced his surprise comeback for this year’s series, there were plenty of questions raised as to where the former multiple supercross and motocross champion would fit into the stacked SX1 field. His championship campaign didn’t get off to the best of starts at Jimboomba’s season opener when a heavy crash saw him fight his way through the field, however a trio of fifth place finishes at the following rounds, plus a heroic podium result on Saturday night’s edition of the AUS-X Open proved he still has the competitive edge as he locked away fifth in the points standings.

5. Hayden Mellross (DPH Motorsport):
By now we have all witnessed the agonising moment when Hayden Mellross’ SX2 championship slipped out of his hands at Sydney’s AUS-X Open finale due to a mechanical malfunction in the dying stages of the main event. Mellross was one of the clear standouts all season long – he was on the podium in every race he completed, and controlled the championship from Toowoomba’s second round. The New South Welshman also claimed his maiden supercross victory in Adelaide, a special night for the 21-year-old.

4. Gavin Faith (Penrite Honda):
Due to Mellross’ misfortune, Gavin Faith was within a few points of title after a stellar series. The American was the most winningest rider in the class, taking four wins out of the six rounds. A costly DNF at Toowoomba’s second significantly damaged his championship hopes, although after piecing it together at the following rounds, he was able secure the runner-up position. 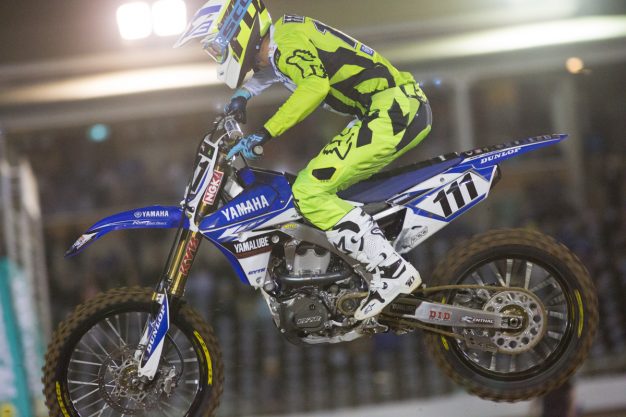 3. Jackson Richardson (Serco Yamaha):
It’s incredible to think that two weeks before Jimboomba Jackson Richardson wasn’t even going to contest the series that he eventually won. A last-minute call-up from Serco Yamaha saw the Queenslander rush to be ready, and it was evident at the first round that he wasn’t quite there. At round two, he turned it around with a race win before stringing together a host of consistent results that kept him within striking distance of the championship. A strong finish on the opening night of the AUS-X Open allowed him to be just six points behind Mellross, and after his incident on night two, the title was all Richardson’s for the taking.

2. Dean Ferris (CDR Yamaha):
CDR Yamaha’s Dean Ferris was classed as a motocross-only guy, although he proved everyone wrong very quickly at the opening round when he finished runner-up to Justin Brayton. He backed up his result at the following rounds, continuing to finish on the podium regularly while being the only rider to halt Brayton’s dominance at Melbourne’s fourth round. Ferris was well and truly one of the biggest standouts in Australian supercross this year, and finishing second in the championship is clear indicator of that.

1. Justin Brayton (Honda Genuine Racing):
Capturing the title with one round to spare, Justin Brayton comes in as the series’ greatest standout. The American had an electrifying start to season, winning the first three races in convincing fashion. When his American rivals arrived for Sydney’s double-header finale, he didn’t back down, claiming second on the opening night, while night two saw him come from last to third in what was one of the most impressive displays of racing we saw all year. Brayton’s only fault came at Melbourne’s fourth round when he was unable to land on the podium after an early crash forced him to work through the field.