A 450cc four-stroke motocross bike is a serious machine, anyone who has swung a leg over one of these in recent years will tell you the same. It’s a whole lot of power in a very small and lightweight package, which needs to be respected and piloted correctly to bring the best out of the bike. But if the bike itself hasn’t been designed well, these big-bore machines tend to place a spotlight on those areas lacking instantly.

Luckily when it comes to the 2017 KTM 450 SX-F, you don’t have to worry about any of that, this bike is thoroughly impressive. Obviously the bike still demands your respect, there’s no doubt about that, but KTM’s engineers have designed it in such a way that either an average weekend rider or professional racer can hop on and feel comfortable right away.

A huge part of this comfort level comes from the weight of the bike; at just 100.2 kilograms, it’s really impressive how light the 2017 KTM 450 SX-F feels on track. A big part of the weight saving comes from the chrome-moly steel frame, which is designed to provide improved rideability, precise cornering and excellent stability. The frame also features high torsional rigidity and low longitudinal stiffness, this results in better absorption of the energy created from the front and rear suspension, sucking up jumps and bumps. In short: this equates to more comfort and less rider fatigue. This is something riders are always on the search for and I can certainly say that I can spin more laps aboard this bike than I ever expected to do.

Attaching the engine to the frame, lightweight aluminum engine head stays also contribute to more precise cornering and a reduced vibration level. The engineers were able to pull off all that, while making their frame a whole kilogram lighter than that of the lightest competitor on the market. In addition, the 2017 KTM 450 SX-F also features an extra-light sub-frame made of stable aluminum profiles, which comes in at just 900 grams.

The swing-arm is designed using cast aluminum to continue saving weight whilst creating improved flex behavior. The single-component casting process also eliminates any inconsistencies and inherent weak points created by welding. It’s also nice to see such a clean and crisp look with no welds, it’s those fine details that KTM really push for each and every year.

Obviously the lightweight frame and swing-arm design is great, but for 2017 it’s the addition of the new WP AER 48 fork that shines as one of the standout features for MY17. Replacing the 4CS units, the new WP AER 48 fork uses a sophisticated air spring design and separate dampening for easy adjustment. Continuing the trend of weight saving, the new forks are also a huge 1.4 kilograms lighter than the previous 4CS offering. I know the question you’re all asking right now, how do they perform on track? My answer? Very well. It’s clear that KTM took their time before making the move to air forks for 2017, the WP AER 48 system is thoroughly impressive and it’s a very welcomed addition to the KTM motocross range.

Initially I had a hard time getting the bike to turn in using the standard fork settings, I lacked confidence in the front-end. Luckily for us, Danny Apro from KTM Australia was on hand to quickly solve my problem and I instantly felt the bike transform completely. That’s one of the advantages with air forks, the amount of adjustability is endless, and can be done instantly on the side of the track.

As a European-based product, the KTM crew works in bar measurement rather than psi, so we went to an air pressure of 9.6 bar and 20 clicks out on the compression. It was amazing just how much confidence I gained in the front-end due to these changes, it was right then and there that I decided I was a huge fan of the new WP AER 48 fork.

In the rear-end, the suspension settings have been updated for 2017 and a softer spring has also been added. To suit my weight (roughly 80 kilograms) and riding style, Apro set me up with 108mm of rider sag and 16 clicks out on the rebound, this setting matched up with my preferred fork settings really had me feeling great on track. With the updated WP AER 48 fork tailored to my needs, along with the revised WP shock setup, I really found the 2017 KTM 450 SX-F so easy to ride. It was very forgiving and tracked through turns with complete confidence both front and rear. The overall chassis and suspension combination is right on the money, it’s a huge credit to the KTM engineers.

In order to test out this chassis and suspension conversation, I clearly needed an engine to get me moving. The 2017 KTM 450 SX-F power plant is a very compact and lightweight piece of gear, in fact, it’s the lightest 450cc motocross engine on the market. Using an SOHC design and the latest electronic fuel injection technology, the MY17 KTM 450 SX-F engine is a huge star.

Using a Keihin Engine Management System with a 44mm throttle body and a unique injector position, the engine’s response is both smooth and instantaneous. And to make life even easier, separate systems for cold starts and idle adjustment are featured. The power delivery and strength of the engine is super impressive for 2017, but it’s really no surprise, KTM’s engines are known for their impressive characteristics. 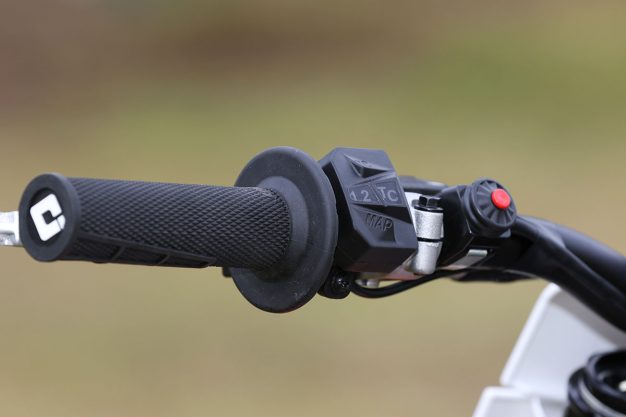 Although known for being strong and highly-competitive engines, what KTM engines haven’t been known for in the past is having traction control. For 2017 another huge update is the addition of a unique traction control and mapping system. Using a convenient handlebar map switch, you can now switch between two maps, one standard and another more aggressive, along with the traction control system.

It’s truly amazing to see a traction control system fitted to a motocross bike, and it’s not just a gimmick, this one does work. The system actually provides full power when the traction is there, but when it senses a loss of traction, the system kicks in and creates the ideal power level and delivery to continue driving through that section of track.

I personally found that in tacky conditions earlier in the day, I preferred the second mapping switch, which was the more aggressive mode. This surprised me as I’m usually one to stick to a standard map on a 450, but being so comfortable and confident aboard the 2017 KTM 450 SX-F, the aggressive mode felt best for me. As conditions begin to deteriorate, you can then switch back to the standard or even traction control mode, it’s such a great system! Now those are the big talking points of the 2017 KTM 450 SX-F, and it’s all positive when it comes to those updates. But we can’t forget the additional features standard on the MY17 450 SX-F, such as the new ‘no dirt’ pegs to avoid dirt clogging, and features such as the hydraulic clutch and Brembo brakes paired with Galfer wave rotors right out of the factory.

The 2017 KTM 450 SX-F is ergonomically right on the money for me too, it’s very comfortable and the Neken handlebars are a great bend. The ODI Lock-On grips also work a treat, they’re a new addition for 2017 and really make life easier in the shed with the lack of glue or wire. Oh and did I mention the bike looks super cool with those bold in-mold graphics? Yeah, very cool.

Overall the 2017 KTM 450 SX-F just keeps ticking boxes, and as KTM says, this bike is ready to race right off the showroom floor. Just get your suspension settings figured out, choose your preferred engine map and you’re ready to roll. If you’re currently in the market for a 2017 450, you really need to take a look at this bike. The 2017 KTM 450 SX-F comes in at a recommended retail price of $12,495 and is now available Australia wide, for more information on the model, head to www.ktm.com.au.