And just like that, the 2016 Australian racing season is done and dusted. It feels like we made our way to Horsham for round one of the 2016 Motul MX Nationals not too long ago, that year just went by in a flash! And what a huge year it was. We saw a whole lot of awesome racing along the way and we definitely produced more content than ever before here at MotoOnline.com.au.

What’s next for us? Well, just like the racers say, the off-season isn’t much of an off-season, and it’s much the same here. We’re tracking down riders and team personnel, working out who’s going where for 2017, and organising non-competition content such as bike and product reviews ahead of the new year.

Following a mammoth weekend at the 2016 AUS-X Open event, which I’m sure Jeremy and Alex will touch on in their pieces this week, it was time to head to the track on Tuesday to ride. Midweek riding for us only means one thing, we’re testing either a bike or product, and this time it was the 2017 KTM four-stroke motocross range.

With Alex jumping behind the lens taking on double duties as both photographer and videographer for the day, both myself and Jeremy hit the track aboard the 2017 KTM 250 SX-F, 350 SX-F and 450 SX-F. Having missed the chance to ride the 2016 editions last year, it was an exciting time for me personally to get my first ride on the new generation models. 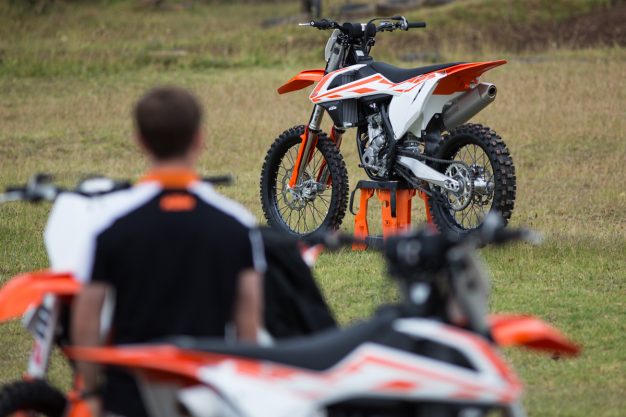 The verdict? Well, as you will have already read worldwide, they’re quite an impressive machine, but for a more in-depth review, stay tuned over the coming weeks. Once again, the guys from KTM Australia were amazing throughout the day, and the crew at Appin had the track prepped perfectly for us to do our thing. Overall it was an awesome day and it was great to have Jeremy out there on track with me, good times!

Finally, I hope our viewers enjoyed our comprehensive 2016 AUS-X Open coverage over the weekend, and to the AME Management crew, once again, you nailed it – what an event! That’s all from me this week, here’s Jeremy…

It’s crazy to think that the 2016 season is officially over, and what way to end it at last weekend’s AUS-X Open in Sydney. As the boys have mentioned, AME Management did an awesome job again this year, and their help and hospitality throughout the weekend is greatly appreciated.

It was unusual to not be shooting photos at the event, but I had a ball posting live updates for our Racefeed feature. We actually switched up the way we did it this time, rather than posting a brief update following each race, we live-tweeted everything as it happened! Personally, I thought it was a better way to go about it, but it would great to hear some feedback on what our viewers thought so we can refine it for next year. Something I really wanted to highlight from the weekend’s event was Hayden Mellross’ professionalism after what must have been one of the most heart-breaking moments of his life. Mellross led the championship since Toowoomba’s second round, and he came within a lap and half of claiming the title before a mechanical malfunction forced him to retire from the race. It was absolutely devastating to witness, and I couldn’t even begin to imagine how he felt.

However, I think a few riders could learn from how he dealt with the situation – obviously he was emotional, although he maintained his composure while being interviewed on live television moments later. Following the race, Mellross re-entered the stadium to congratulate eventual championship victor Jackson Richardson – that right there was a true indication of Mellross’ character, and to me, it was one of the greatest acts of sportsmanship that I’ve seen this year.

Oh, and lastly, as Spence mentioned, we had the chance to test KTM’s 2017 SX-F range at Appin this week. I had a great time aboard all three bikes, and I think the blisters on my hands are a tell-tale sign of that! The range was truly impressive, and I must say thank you to the KTM Australia crew who went above and beyond to ensure we were comfortable on the bikes, making any adjustments we needed – it’s much appreciated guys.