A few years ago you could be forgiven for not knowing a thing about the French manufacturer Sherco. Stemming from a trials background, the brand has been producing off-road bikes for some years now, and in 2016, Sherco has made its mark. This year Sherco has proven its worth after verifying themselves as legitimate contenders in the off-road scene by winning the EnduroGP world championship with its 300 SEF-R, piloted by Australian Matthew Phillips.

For 2017 Sherco has not settled with what was produced to win the 2016 title, and set about making a host of changes to the entire fleet of enduro beasts – making them stronger with greater handling and a few additions to make owning a Sherco that much better off the showroom floor.

MotoOnline.com.au was fortunate enough to meet up with Sherco Australia’s Stephen Tuff to ride the 2017 Sherco Enduro bikes while he was passing through Sydney. It was just over a year ago that we test rode the 2016 bikes, and it was a great opportunity to throw a leg over the 2017 models and see what an enduro championship-winning manufacturer feels like agin.

The most notable change to the entire 2017 range is the new updated plastics and design. The new plastics feature in-molded graphics, reinforced plastic parts, dual compound plastics to cope better with mud on the front guard along with a new graphics kit. Other additions in this area are new frame protectors and higher capacity translucent fuel tanks – the four-stroke models are now 9.7 litres, which has increased by in 1.2 litres, while the two-strokes now hold 10.4 litres.

The chassis has been adjusted significantly in the steering head tube, where a reduction to the angle has allowed for better traction and improved front wheel grip. The chassis has also had a host of reinforcements added as well. 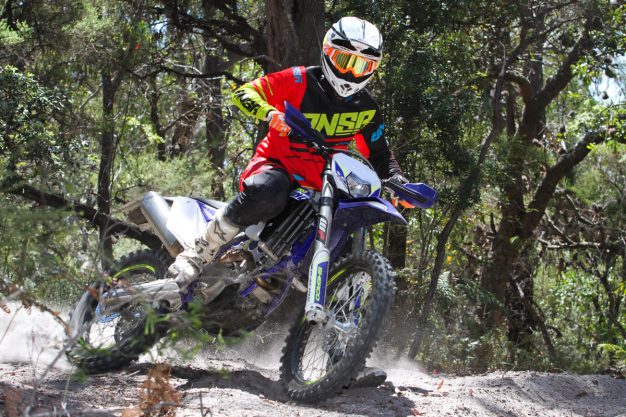 Sherco has also made modifications to the linkage with a larger diameter 14mm axle and improvements in the sealing for better life. The swing arm has also been made from a new material to give it a boost in strength by 40 percent. Still remaining at the rear of the Sherco, a new reinforced rear axle has been added to the entire Sherco family.

The last of the changes that have been made for the entire range of the Sherco Enduro family are new front wheel spokes for better rigidity of the wheel, which has also reduced weight. The WP shock has a new pre-load adjuster too. Finishing off the updates to the entire range are the new dual layer factory grips.

Looking at the Sherco 250 and 300 SE-R, you will notice a collection of parts that you would be familiar with on many of the European brands – Brembo front and rear brakes, Brembo hydrulic clutch, electric start, Keihin carburettor, dual mapping switch, FMF factory exhaust and WP suspension.

The 250 SE-R is by far one of the most enjoyable bikes to ride, the handling of the bike has been improved from the previous 2016 model and is really well suited to the tight single trail we were treated with on the New South Wales central coast. That is not saying the previous model didn’t handle well, in fact the Sherco’s are really well known for their slightly smaller frame and ability to turn well in tighter conditions. The power delivery is smooth yet powerful, and the ability to change maps on the trail really helps you to adjust to the trail surface conditions.

The Sherco 300 SE-R motor is really strong, it has plenty of torque down low to lug you through the tight single trail, with plenty more once you hit the open fire trails and bush tracks. Being a smaller frame, the Sherco 300 SE-R really feels like you can man handle the bike a little more than the other 300 two-strokes on offer from alternative manufactures. The mapping switch probably comes into play a little more with the 300 over the 250, due to the ample power on tap. This really helps to conserve energy and find better traction on the slippery parts of the trail. The added updates to the 2017 Sherco two-strokes include a new cyclider head which allows the frame mount to be better reinforced, and a new balance crankshaft which has smoothed out the power a lower revs, reducing vibration.

Further improvements to the oil burners is a new V-Force 4 reed assembly, which has increased low speed power, while the carburettor has new settings improving the power delivery to make it more linear, reducing detonation and cutting the pinging affect on slowing down.

Overall, the Sherco two-strokes are both a really fun bikes to ride, the different bike capacities give you different options and a slightly different experience, depending on what type of riding you’re doing and the terrain you usually encounter.

Moving onto the Sherco four-strokes. We managed to jump on-board the 250, 300 and 450 SEF-R Sherco bikes back to back, which was enjoyable to really get a feel for what each bike offers. The keyless injection has been revised with a better wiring system, including revise battery terminals, starter relay and a new sheath for the wiring harness. The 250 SEF-R has received a new forged piston which has improved durability and increased resistance without any additional weight or inertia.

The 450 SEF-R has had attention focused on the cylinder head, simplifying the assembly while reducing weight and improving durability. The clutch has also had some updates giving it better feeling, improved durability and temperature control. The fuel pump on the 450 SEF-R has also been redesigned to improve reliability.

The 250 SEF-R is one of the most easy going bikes around – light weight, turns on a dime, plenty of horses and just feels effortless to ride in the bush. The nature of the small frame really makes the 250 SEF-R perform well amongst the trees. Changing lines mid-corner is no problem on this animal – just point and shoot. The power delivery is buttery smooth and more controllable giving you lots of encouragement to twist the throttle even further.

The 300 SEF-R the bike that Mathew Phillips won the 2016 EnduroGP world championship on is probably the stand out amongst the entire range. A slightly smaller engine capacity than the traditional mid-sized four-stroke we have become accustomed to over the last few years, the 300 SEF-R, like we said last year, is like a 250 on steroids. It is roughly the same weight but with few extra horses to pull you around the trail. It would be the prime bike that you really feel the advantages of a smaller frame with ample power. The stop watch doesn’t lie either, while the 450 might have the power everyone loves – “nine times out of 10 the average rider, the 300 SEF-R will have the faster lap time on enduro style tracks,” said Sherco Australia’s Stephen Tuff. There is no doubt the 300 SEF-R feels just as effortless to ride in the tight conditions as the 250, but with the power a bigger rider might be searching for.

Stepping up to the 450 SEF-R, it has also proven to be a stand out winning the Australia Off-Road Championship with Under 19s team rider Will Ruprecht and also winning the Under 19s Hattah desert race – showing the Sherco 450 SEF-R has what it takes to compete at the highest level of Australian off-road racing. While the handling shines in the tighter conditions, the 450 SEF-R really does have the power to match out on the open trails as well. The handling paired with the motor really shows why Sherco have got a very strong package for the Australian off-road market.

A few things you will really notice throughout the Sherco enduro range is the lack of kick starters. With recent advancements in batteries and their capabilities, Sherco has run a very strong lightweight starter motor and battery which makes the need for a kick starter to be redundant.

WP suspension front and rear come set for the trail, which makes the handling very forgiving and predictable. It has a 48mm spring fork and linkage system rear suspension. Overall, the 2017 Sherco range continues to grow in popularity and it is hard to fault the bikes, especially when they are winning both on the world stage and domestically.