The Point: State of AUS Supercross

Industry insiders share their opinion on the state of Australian supercross.

The Australian Supercross Championship appeared to take another step forward in 2016 with a greater depth of talent between the classes and an increase in race fans attending events. Following Sydney’s season finale last weekend, MotoOnline.com.au has gathered thoughts from a selection of industry insiders for their opinion on the current state of Australian supercross. 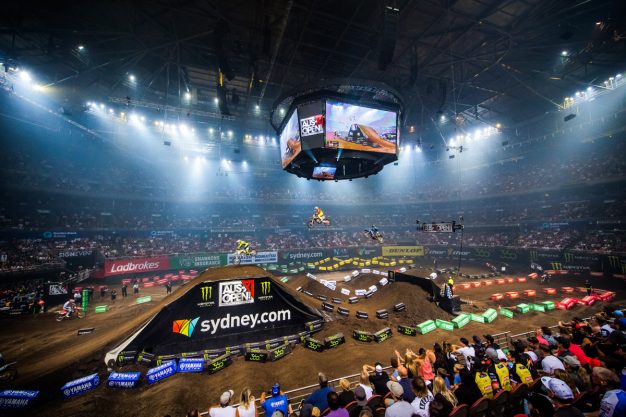 Adam Bailey (AUS-X Open):
I think it’s back on the up, it’s a really exciting time. Purely, if nothing else, the crowd numbers are increasing – there’s no question [about it] across the series. The riders and depth of talent is increasing, and gates are becoming more full. Overall, I think the riders and teams are becoming more enthusiastic, as is the industry, which is good news for all of us – there’s a buzz around supercross again. A couple of years ago when we were first looking at doing the AUS-X Open, there were people saying that supercross was dead and that we should pack it up and forget about it. I think the people that were saying that have stopped saying it, and are believing in it again, which is huge and a big compliment to everyone involved – that includes all of the other promoters, the teams, the riders and anyone that’s had anything to do with it. I feel like they should be really pumped with all that. I don’t know if there are specific changes [to be made], I think it’s going in the right direction. I wasn’t a believer in the Under 19’s class, and I thought it was a positive to not have that, so that was a good step. I feel like it helped the depth of the SX2 class, which is so important – that was something that I was really rallying for. In terms of future changes, I don’t know, I think everyone is on the right track, it’s just more of the same, which is refining everything that we’re doing. From the promoters to the teams, and to Motorcycling Australia – I think it’s just to continue to refine everything that we’re doing.

Peter Doyle (Motorcycling Australia):
It’s a bit difficult for me to comment on what went on prior to 2014, but from what I’ve seen in 2014, we’re way ahead of the game. Does it need a lot more? Absolutely. Supercross is difficult, it’s a big outlay for promoters, and it’s high-risk for them. I think you’ll find history will tell you that a single promoter hasn’t really worked in Australia for many, many years. Again, not that I’ve been here, but many have tried and failed. I think the series was reasonably good, the quality of the racing was obviously quite good. The industry and professional riders looked good, and the event in Sydney, from a spectators point of view, it was a great event, but so was the whole series. I think the key now is for the promoters to get some consistency as far as the operational side goes – a consistent schedule, consistent press days and consistent medical. While everything was reasonably good, there were a lot of inconstancies. When you went to an event in Adelaide, it was different to an event in Brisbane. In reality, I think the key will be to get more consistency for everybody really. That’s not a negative to anyone, supercross in reality is not a club day – it’s a big investment, it’s a blue ribbon series like your premier road racing or your premier motocross and premier speedway. It’s blue ribbon and needs to have a sense of professionalism about it. If you look at any good series in the world, it doesn’t matter whether it’s motocross, road racing or speedway, they’re all run on a very consistent basis. I think it will be up to Motorcycling Australia to work with the promoter group to help bring consistency around it – that’s where we’ll be coming into it as the mediator. Essentially, we need to work with the group and start to get them to agree on a common direction in many areas.

Gavin Eales (Serco Yamaha):
I think it was a very successful series, the only problem I see is that we need to have one promoter run the whole lot so we have consistency with tracks and just with how the events run. Apart from that, the events from the outside public view look great, but just from the back-end, I think if you had the same person running every event, it could be a bit better. Like I said, some continuity of the tracks – the same person building and watering the tracks. The tracks in Adelaide and Melbourne were very dusty, maybe if they put a bit more water on them, I’m just saying they could’ve been a bit better, but even Sydney was pretty dusty. It would be great to have it in big arenas, but at the end of the day, you have to crawl before you walk – supercross has been down in the dumps for a couple of years. I’m all for letting it grow with the stadiums, you know, start small and go big. There’s no way we could go to Eithad Stadium at the moment, you wouldn’t get the crowd to justify it – someone would lose a lot of money. In two or three years, yeah we could go to Etihad Stadium if it keeps growing the way it is. I don’t think it would be a problem, but you’ve just got to grow slowly. It was definitely better [this year], there’s no doubt it was better – the television was great, we’re going forward and we’re definitely going in the right direction – there’s no doubt about that. 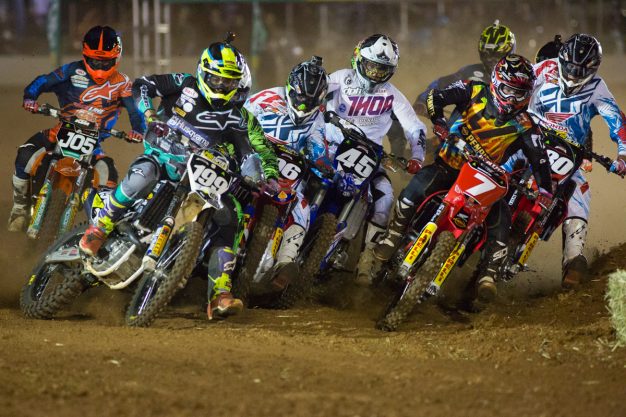 Jay Marmont (MXR&D Husqvarna):
I thought the supercross championship was unreal to be honest. We didn’t really have a wet weather round, but we did have a couple of rounds where it was pretty cold, and I have to admit, the Toowoomba round, it didn’t have the feeling around the race. It was a pretty cold and windy type of night, and that kind of took the vibe away from it. The round at Avalon was a bit like that, but the crowd brought the atmosphere there – they were a bit more into it even though it was at a speedway circuit. Overall, I thought the tracks were really good, I thought the racing was quite competitive, besides [Justin] Brayton dominating the 450 class, all of the other riders were pretty close together, so it made interesting for the championship all the way until the end. The only thing I was disappointed at was halving the points in Sydney – I didn’t really see that as being fair. Basically, I went out there and was good enough to beat some of the Americans – Hahn and Reardon didn’t have the best night – but they only gave me half the points for doing so. I can see where they were coming from doing half of the points because the American’s were out here, so they didn’t want us to score uneven points, but as far as I saw it, it was rounds five and six of the championship, so it should’ve been classified as full-point rounds. I think there are always changes that could be made to make it better, but to me, the venue choices, I think half of them were pretty good. Adelaide was unreal, Jimboomba was pretty good, places like Toowoomba just don’t seem to work there in the past – the crowd and that just weren’t into it as much. But yeah, just the venue places, I thought the tracks were really good this year. I think for Australian tracks, if it’s anywhere from 35 to 50-second lap times, it seems to work out better. Anything that’s a little bit longer than that, our racing seems to get a bit lost and boring with the 20-lap finals. One thing I was disappointed in this year was the lack of juniors that followed the supercross series, I’m not sure why juniors don’t want to do supercross – I thought it was great that the promoters gave them the chance to race in front of all those people in the stands and be deserving of a supercross championship. When I grew up racing with Chad Reed, Robbie Maddison and all the guys who came through, we always looked forward to doing the supercross championship. That was a little disappointing to sit back and watch, but the kids who did do it, I thought they took a lot away from it and rode really well. There were no injuries, it was safe and everything was great on their end.

Aaron Marks (A1 Accessory Imports):
It has been a really positive experience for Motorex to be involved in supercross this year. It is great to see so much involvement and engagement from both the industry and the community alike with the Australian Supercross Championship. The level of riding has definitely increased with a lot of international talent coming over to race in our series. Overall, I think everything is heading in a really positive direction. The level of commitment shown by the promoters has boosted the series as a whole and I think getting international riders over has been a great help in promoting the sport, and getting it recognised – I think that’s the main change from previous years, the promoters are getting really involved, putting their hand up and giving it a crack. It’s a bit of a double-edged sword [with international riders], because I really want to be able to see young talent coming through and getting these rides, but I feel that having the international riders over boosts’ the sport and may create more rides for the young guns in the future. Their time will come, but I guess it’s just being persistent and really working hard to prove themselves to get on those teams. It is also a really good opportunity to see where their speed stacks up against international competition and where they need to be speed wise if they want to race overseas. It was great to get some air time this year, and it would be awesome to see even more television time. I also think getting outside industry sponsorship really helps access new markets and audiences. I was really happy with how the events were run and the atmosphere at them, everyone seems to be really happy and we’ve had nothing but positive feedback.