Highs and lows from the 2016 Sydney spectacular.

MotoOnline.com.au pulls out the microscope and dissects some of the surprises, standouts, shockers and disappointments from the 2016 AUS-X Open event inside Qudos Bank Arena in Sydney. 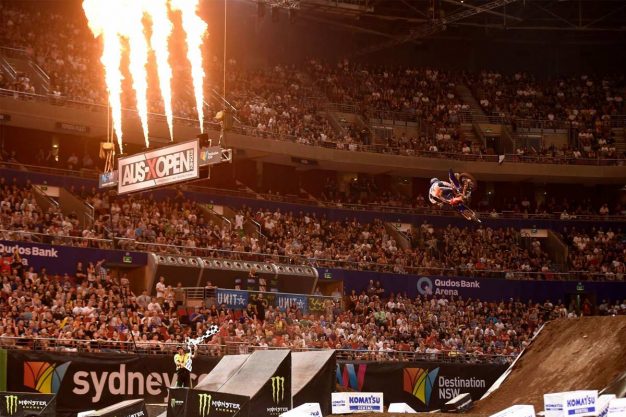 Chad Reed:
The Australian motocross and supercross icon was on fire the entire weekend in Sydney. As he did last year, Reed kicked off his 2016 AUS-X Open campaign with the main event win on Saturday night after an intense race with American Justin Brayton. He made it clear that he had his sights set on doing the double this year, and that he did. Reed rocketed to the lead during Sunday night’t main event, passing early leader Ryan Villopoto in the process, and never looked back on his way to his second SX1 victory of the weekend.

Jackson Richardson:
The Serco Yamaha rider entered the weekend with a mathematical chance of taking home the 2016 SX2 Australian Supercross Championship, but it was always going to be a tough task taking down series leader, Hayden Mellross. Richardson put together a strong and consistent weekend with a pair of second place finishes over the two nights of racing. It all looked to be done and dusted during Sunday’s main event with Mellross ahead of Richardson ready to lock down the title, then disaster struck for the DPH Motorsport Yamaha rider with a mechanical DNF. As they say, you have to be in it to win it, and Richardson was right there in the perfect position to capitalise on his rival’s misfortune and claim the title.

Gavin Faith:
After leaving the inaugural running of the AUS-X Open in an ambulance last year following a huge crash as an SX1 contender, Faith returned to redeem himself as an SX2 contender for 2016. The American Arenacross champion was in fine form all weekend as he asserted his dominance with two convincing main event victories. The former multi-time champion may have missed out on the SX2 title, but he sure did impress inside Qudos Bank Arena last weekend. Hayden Mellross:
What a roller coaster of emotions it was for DPH Motorsport Yamaha’s Hayden Mellross at the 2016 AUS-X Open event. Carrying the red plate into the spectacular event, Mellross was feeling strong and confident, he even rocked a gold helmet and jersey prints! All was going to plan for Mellross following a third place finish on night one, which he then backed up with a comfortable second place ride for the majority of Sunday’s main event. With just two laps remaining, Mellross began to look down at his machine, moments later, it was all over for the New South Wales native as he recored a DNF result and saw the title slip away.

Jay Wilson:
It was a tough weekend for the Crankt Protein Honda Racing rider in Sydney, which he admitted was largely due to putting himself in bad positions on both Saturday and Sunday. The result of this? Failing to qualify for either of the weekend’s SX1 main events. It was an unfortunate way for the 2015 MX Nationals MX2 champion to finish off a challenging first year in the class filled with injuries and sub-par results.

Jesse Dobson:
The KTM Racing Team rider entered the final event of the season with a long list of crashes and injury woes to his name throughout the 2016 season. Dobson, a talented, young and eager SX1 contender, showed impressive speed during the AUS-X Open weekend including a fourth place qualifying time on Sunday morning. Unfortunately the Queenslander’s results didn’t show the raw speed Dobson laid down as he failed to make the Saturday main event and chalked up a DNF finish on Sunday night.