MotoOnline.com.au breaks down the specifics from Saturday and Sunday’s final rounds of the 2016 Australian Supercross Championship, which was run in conjunction with the prestigious AUS-X Open inside Sydney’s Qudos Bank Arena. Chad Reed and Gavin Faith were the favourites to capture victory, and they delivered exactly that over both nights. Verdict: Australian supercross and motocross legend Chad Reed (Yamaha Factory Racing) claimed back-to-back wins in Sydney, much to the delight of fans that packed out Sydney’s Qudos Bank Arena. He didn’t have it all his own way, as Saturday night saw him race behind newly crowned champion Justin Brayton (Honda Genuine Racing) for majority of the 20-lap main, however he made the all important pass with just a handful of laps to go. The pair found themselves just seconds into Sunday’s main event, where Reed slammed Brayton exiting turn one, forcing the Honda-mounted rider to the ground. Headlining American Ryan Villopoto (Monster Energy Kawasaki) used the opportunity to grasp the early lead, although Reed was able to overcome the four-time Monster Energy Supercross champion just laps into the race via the Shannons shortcut lane. Reed’s teammate Cooper Webb (Yamaha Factory Racing) turned his weekend around on Sunday to finish in second after being credited fourth the previous night. One of the most special moments to transpire over the weekend was Jay Marmont’s (MXR&D Husqvarna) heroic podium finish on Saturday – his first since coming out of retirement for the 2016 Australian Supercross Championship. The multi-time Australian supercross and motocross champion was thrilled with the result which justified his comeback to professional racing. 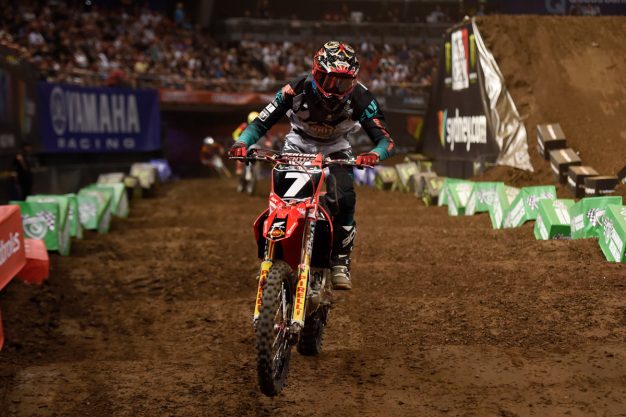 Verdict: Penrite Honda’s Gavin Faith controlled the race for the entire 15 laps to make it two wins in a row at Sydney’s Qudos Bank Arena, putting him to just three points of the title at the conclusion of the weekend. DPH Motorsport’s Hayden Mellross tagged onto the back of Faith, however disaster struck the New South Welshman with only two laps to go when a mechanical malfunction saw his night come to a premature end, ultimately costing him the championship. Serco Yamaha’s Jackson Richardson took advantage of the situation, racing home to second and earning the SX2 title in the process. Mellross was evidently distraught after the race, although he displayed his true character by congratulating Richardson on the championship and maintaining his composure for a post-race interview on live television. Sunday’s top three was rounded out by Western Australia’s Kyle Webster (CRF Honda Racing), who’s third place finish marked his maiden podium in professional supercross racing. The 20-year-old was overwhelmingly pleased to cap-off the year with such a strong and confidence boosting result.