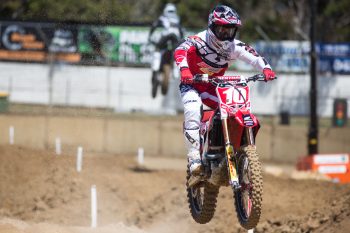 Honda Genuine Racing’s Justin Brayton humbled by fans support as he aims to race for wins in the final two rounds.

Honda Genuine Racing’s Justin Brayton has an 11 point lead going into the final two rounds. His approach to this coming weekend is no different to any other.

“I want to win, anything less would mean I am not focused. I have raced Reed, Villopoto and Webb before. It won’t be foreign to me,” said Brayton.

The tight indoor circuit emulates the Arenacross tracks where Justin first started his professional career. The likeable American believes this could work to his advantage.

“Racing will always be racing, however Arenacross tracks are different, and the intensity is different. I have raced and won many Arenacross’. I am not sure if it’s an advantage, however it’ certainly not a disadvantage,” said Brayton.

With 15 points still available each night, Brayton needs to be in front of his nearest rival (Ferris) by several places before being able to capture the win. He is mindful the championship could come down to 20 hard laps in the final round of the year.

“It’s still very close; neither of us can afford to make a mistake. I am racing to win, however I am mindful of the championship,” said Brayton.

“The last two rounds have been ok, however I haven’t ridden my best and I was caught up in a first turn crash in Avalon. I need to make both main events and push forward. I still get 6th or 7th in the championship and I will be pushing hard to achieve that,” said Enticknap.

The teams latest recruit Ford Dale is excited by his inclusion, however he is realistic about his expectations.

“I want to be comfortable, get good starts, race with the leaders and make the main both nights. If I can achieve this, I will be happy, said Dale”