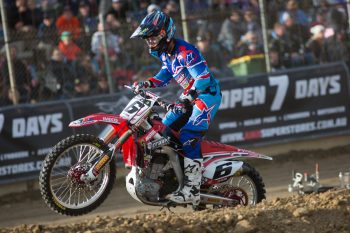 Crankt Protein Honda Racing Team’s Jay Wilson and Chris Alldredge are preparing to head indoors for the final two rounds of the 2016 Australian Supercross Championship, with the AUS-X Open set to be held at Qudos Bank Arena this Saturday and Sunday, November 12-13.

With confirmation that night one (Round 5) will be witnessed by a sold out crowd, both Wilson and Alldredge are preparing to head north to Sydney to put on a show, and with this weekend marking the final outing for the team this year, both riders will be aiming for impressive results.

Wilson who has raced to consistent top ten finishes in SX1 class aboard his factory CRF450R throughout the last four rounds, says that this weekend it will be more important than ever to make that hard fought main event.

“I’m really looking forward to this weekend – last year I had a broken wrist and I watched from the stands, and honestly it was one of the hardest weekends of my life (laughs),” Wilson shared.

“At this round we have some seriously fast guys who have come over to race, so the goal for me is to get a good start and stay up the front so we can make sure we’re in that main event.

“Being the last two rounds for the year there’s a lot of excitement, and fans from all over the country come to support this event, so I’m looking forward to lining up indoors for a change and doing my very best for the final time this year.”

American import Alldredge has also shared his excitement in heading to Australia’s biggest Supercross event the AUS-X Open, and with his shoulder feeling healthy, says that he’ll be leaving nothing on the track this weekend.

“When I originally was asked to come over, the AUS-X Open was one of the races I had heard a lot about and was really looking forward to,” Alldredge said.

“We’ve done a lot of work since Toowoomba to ensure that I was ready for this weekend, and the shoulder is feeling good, and I’m ready for two big days of racing.

“Obviously a lot of Americans have made the journey over to race this weekend which is really cool, so I’m looking forward to lining up with both the Aussies and the guys from the U.S, and giving this weekend our best shot.”

The Crankt Protein Honda Racing Team will now begin preparations for the final two rounds of of the Australian Supercross Championship, the AUS-X Open, being held at Qudos Bank Arena in Sydney on November 12 and 13, 2016.