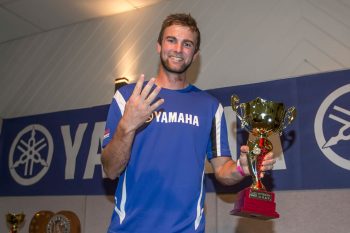 Yamaha will have an enormous presence at the 2016 Australian Four Day Enduro to be held at Mansfield in Victoria next week, both on the trail and in the Parc Ferme, after securing the naming rights sponsorship of the event as well as boasting a huge rider line up.

The 2016 Yamaha Australia Four Day Enduro (A4DE) bursts to life next Tuesday as the prologue gets under way with over 150 riders, including some of the world’s best, go head to head over four days of racing in the nations’ most prestigious off road motorcycle event.

CDR Yamaha
Heading the Yamaha charge is Daniel Milner, who has returned from the US to contest the event and will again be working with his old team, CDR Yamaha. Milner is a multi-time and current A4DE champion and will be gunning for five in a row as he returns to defend his crown and on familiar grounds in his native Victoria.

Milner will compete on a WR450F in the E2 class.

“It’s great to be back home at the moment and for the event to be in Victoria makes it even better,” Milner states. “I have had a tough couple of years in the US but racing this event always brings out the best in me and working with the CDR Yamaha crew again is awesome.

“I hope everyone gets out and supports the event as there are plenty of world class riders and some great riding terrain over the four days,” Milner ends.

Backing Milner up in the CDR Yamaha camp will be Chris Hollis and Tom McCormack. Both riders are also WR450F mounted and will be hoping for a CDR Yamaha podium lock out in the E2 category. Hollis is a previous winner of the event and the veteran continues to show the young bucks the way around and will again to be a force to be reckoned with when he puts his years of experience in action next week.

Tom McCormack has been putting in the heard yards and hoping to build on the momentum gained at the end of the Australian Off Road Championship rounds. McCormack has rebounded from a serious injury in 2015 and only now is beginning to find his best form and just in time for the A4DE.

ACTIVE8 Yamaha
In a bid to showcase the high quality and diverse range of Yamaha off road equipment, the Active8 Yamaha team are mixing it up this A4DE. Chris Davey will fill the seat vacated by the injured Beau Ralston and will break out the YZ250 two stroke with a big bore 300cc kit installed and contest the E3 class, while the fresh off the injury list, Josh Green, wil step aboard the YZ250FX and go after the E1 honours.

Green, who has just returned to riding after five months on the sideline with knee surgery feels the lighter, more nimble 250FX machine is just what he needs as he regains full strength and fitness.

“I guess we are spoiled for choice at Yamaha with the range of bikes at our disposal and with my limited time to prepare because of my knee, then myself and the team felt the YZ250FX was the way to go. I’m loving it at the moment and I feel great on the bike so I look forward to a good week with the team down in Victoria,” Green said.

Female flyer, Tayla Jones, will continue under the Active8 Yamaha banner at the A4DE on her YZ250FX. Jones is a standout in women’s racing and after spending the last 12 months mixing it up with the boys, she is more determined than ever to get another A4DE championship to her name.

WOMEN’s
Yamaha will again have all bases covered in the Women’s class when the world championship winning combination of Tayla Jones, Jemma Wilson and Jessica Gardiner line up at the A4DE on their Yamaha machines. All three girls have experienced success at the A4DE and will again be out to make it an all blue podium at the end of the event.

Yamaha Support
Yamaha will again have a heap of supported riders in a range of classes at this years’ event. Riley Graham and Stefan Granquist will fly the flag in the E1 class on board the Yamaha YZ250FX. Add Kirk Hutton in the vets and a host of other sprinkled throughout the field and you began to see the dedication Yamaha Australia has to off road racing.

For more information on the event: http://www.a4de.com.au/