Waters and Wilson bound for AUS-X Open in Sydney 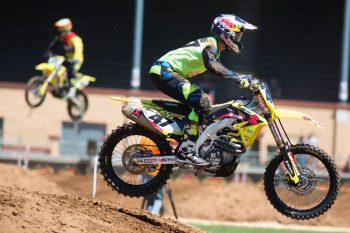 Wilson Coolair Motul Factory Suzuki will welcome back Todd Waters to the team for the AUS-X Open this weekend, after being sidelined from the Melbourne instalment of the 2016 Australian Supecross Championship due to injury.

As well as Waters returning, SX1 team rider Luke Wilson who suffered a hand injury just over a week ago will also line up with some of the fastest riders in the country this Saturday and Sunday, with the final two rounds of the series set to take place at Qudos Bank Arena in Sydney.

Waters, who has showed impressive speed throughout three rounds of the championship so far this year, shared his eagerness to participate in his first ever AUS-X Open, and to have the chance to race indoors.

“I’m really excited for this weekend, it’s my first AUS-X Open and there’s some big name riders who have come over for the event, so with indoor racing, a tight track, and a sold out crowd the atmosphere should be awesome,” Waters shared.

“I’m still a little bit sore and busted up but I figure the track is a lot smaller to what we’ve been racing, so it should be a little bit easier on the body.

“I can still remember watching Supercross back in the day when all of the racing was pretty much indoors, so I’m excited to have my first indoor experience this weekend. The goal will be to get good starts, make our passes quick and keep it on two wheels – I can’t wait.”

Wilson shared that at the beginning of this week he was uncertain as to whether or not he would be able to line up in Sydney at all, however after getting the ‘all clear’ from the doctors, has shared that he cannot wait to head out onto the Qudos bank Arena surface this weekend.

“After Melbourne it was really touch and go as to whether or not I would be able to race this weekend, but being the last round and the biggest Supercross race in the country I’m determined to get out there,” Wilson said.

“I wasn’t able to get any riding in this week due to my hand, but I’ve been able to let it rest which is what it needed, and hopefully that will pay off on Saturday and Sunday.

“The goal is to make sure I’m out there for Suzuki and the team, so I’ll do practice, see how it’s feeling, and if it’s ok I’ll be doing everything I can to make it in to that main event on both days.”

Wilson Coolair Motul Factory Suzuki will now begin preparations for the final two rounds of of the 2016 Australian Supercross Championship, the AUS-X Open, being held at Qudos Bank Arena in Sydney on Saturday and Sunday, November 12-13.

For further information on the Australian Supercross Championships, head to www.ma.org.au