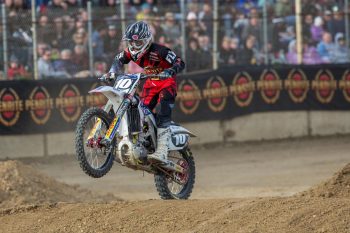 Penrite Honda’s Gavin Faith is eager to finish strong. The 2012 and 2014 Australian Supercross Champion and current American Arenacross Champion will be disappointed with anything less than two wins.

“I need to win. I can’t control what happens behind me; however I need to go out and win both nights, I currently sit 17 points behind Mellross and 8 points behind Richardson so all I can do is put it all on the line and see what comes from it, said Faith”.

Mathematically there is a chance Faith could win the title. There are 30 points still available. The last two rounds are promising to be a massive two nights of intense racing.

Australian Josh Cachia sits just outside of the top ten following a string of uncontrollable errors. His aim is to qualify for both main events and finish inside the top ten in the championship –

“This champion has been hard, in Avalon I was taken out in the first corner and my bike was damaged so I couldn’t finish. It’s been frustrating. I know I am a top 6 guy. I need to get two good starts and go for it. I have nothing to lose, said Cachia”.

The Penrite Honda Team currently sits in third and fourteenth respectively and are hoping to improve their overall positions.

A newly redesigned website will be launched tonight ahead of this weekend. The will also reveal two new looking Penrite bikes thanks to SK Designs and Polisport.