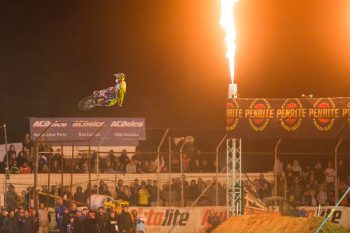 It was a strong showing for Dunlop-equipped contenders in Melbourne’s fourth round of the 2016 Australian Supercross Championship on 5 November at Avalon Raceway, Victoria.

In the premier SX1 ranks it was newly-crowned MX Nationals champion Dean Ferris who captured a career-first main event victory aboard his CDR Yamaha YZ450F.
Ferris endured a hard-fought battle with teammate Dan Reardon to claim the win on the hard-pack, slick circuit and continues to hold down second place in the championship chase.

Defending champion Reardon backed up his strong Adelaide performance with another runner-up result at round four. Aboard his Dunlop-supported CDR Yamaha, the Queenslander led much of the 20-lap main event before succumbing to the pressure of Ferris.

In the hotly-contested SX2 category, Serco Yamaha’s Jackson Richardson made his way to the podium with a strong runner-up showing. The Queenslander now sits just eight points out of the championship lead with two rounds of racing remaining.

DPH Motorsport Yamaha’s Hayden Mellross charged through the SX2 pack to claim the final podium position on Saturday night. Following a rough start to the 15-lap final, the red plate holder tore through the field to salvage valuable points.

The 2016 Australian Supercross Championship will now make its way to Sydney for rounds five and six at the double-header AUS-X Open event on 12-13 November to cap off the season.

Visit www.dunloptyres.com.au or find Dunlop Tyres Australia & New Zealand on Facebook and @ridedunlopau on Instagram for further information on the brand.