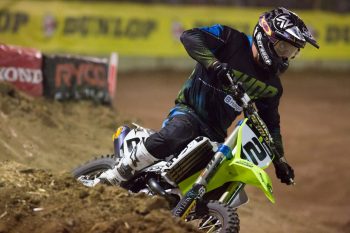 Former Australian Motocross and Supercross Champion Jay Marmont has maintained his incredible streak of form since coming out of retirement to join the ranks of Australia’s Supercross elite, finishing fifth in last night’s round of the Australian Supercross championships in Melbourne.

On a slippery, rock-hard track that tested the skill and composure of competitors to the max, Marmont capitalised on a top-three start and delivered 20 laps on target with relentless reliability, as the round went to Dean Ferris ahead of Daniel Reardon and Wil Hahn.

His third top-five finish in as many rounds sees Marmont shore up his fifth place position in the rankings of the Australian Supercross Championship with next weekend’s Aus-X Open yet to come.

Husqvarna celebrated a race win and a championship win earlier in the evening, when Callum Norton powered his Husqvarna FC 250 to his second consecutive Junior Lites category win ahead of Husqvarna Junior Factory teammate Riley Dukes.

Dukes however, had plenty to console him, his 2, 2, 3 result on the night giving him enough points to secure the Australian Junior Lites Supercross Championship in what was his first full season of supercross.

In the SX2 category, something as simple as a damaged gear shifter from a crash earlier in the main event saw supercross rookie Connor Tierney end his night in a hospital bed, when he inadvertently found neutral on the upramp of a double.

The MXD Vice Champion was knocked out for several minutes and was taken to hospital for a number of tests, one of which has revealed a fracture to one of the processes in his Thoracic spine.

Nathan Crawford did not proceed to the final after registering a non-finish in the Last Chance Qualifier.

Jay Marmont – “It was another good night. Qualifying wasn’t the best – we were close on times, so we weren’t too worried, I knew that getting into a good position was going to be key. It was slippery before practice and from then on they just couldn’t get any more water into it because the track was just baked. Honestly, we were running about a 10 psi tyre pressures in the heat race, and they were going up to 20 psi after just eight laps just from the amount of wheel spin you were getting out there. It was unbelievable. I finished second in my heat after leading at one point then got a really good jump in the final. Will and Justin got a bit stuck together which allowed the Yamaha boys and I to go up the inside. Will got me around lap 12, and then I unfortunately made a couple of mistakes in the later part of the race and allowed Justin Brayton to get me on the last lap. Overall a very positive result, we were close to the podium but unfortunately just drifted a couple of spots back to fifth. But aside from that it was a really good night, no crashes when it was a really tough track. You definitely didn’t want to be on the ground.”

Connor Tierney – “I had a crash in the main and hit my head pretty hard. I was out for a few minutes at the track, and had a pretty sore back and stuff so I got checked out to make sure everything is alright. Turns out a fracture to the wings on my spine at about T8 I think, it’s nothing critical but I will be having a meeting with a specialist tomorrow.

I had a good feeling about last night, too. I got a good start but then someone landed on me on the first lap, and I hit my head in that crash, got back up and started making a few positions and passing a few of the slower guys, but the spring-tip on my gearlever broke and was facing all the way forwards, so it was kind of a lucky dip as to whether I got a good pull on the gear lever each time. I had been on the ground for a while so the boys were coming around to lap me – I changed my line to get out of the way, and clicked a false neutral on the upramp. I went over the bars and I think the bike followed me. I just remember waking up with the medics, I give a huge thanks to the Race Safe guys, they were straight on it.”

Callum Norton – “It was awesome. I had a great night, I got used to the track and it was all good. It was only an hour and 10 down the road so I had a few mates there watching. I won my first two races during the day, and then I raced at night with the crowd and that and got the win in that one as well so, I got three out of three for the night and that was bloody awesome. Two in a row was nice, and Riley rode awesome. He got two seconds and a third after a bit of an off in one race and he took out the championship, so that was fantastic. I wasn’t at the first two rounds so I wasn’t in the running but it was great to see him win.”

Riley Dukes – “It feels pretty good – this was my first year at Supercross so I was happy to walk away with the title. It all came down to practice and mum and dad taking us everywhere, and I couldn’t have done it without everyone at Husqvarna. Last night was probably the most difficult round, I qualified first which I was pretty happy with but in the first one I got a bad start and just got held up a little bit and got second. In the second moto I was running second behind Cal and I had a big crash in the whoops and hurt my shoulder. I got back on and limped home for third. I went back out for the last one just to ride around but ended up coming home in second, so that gave me the overall win. I was really surprised to win this year, I had some good competition coming in, but I worked my way around it and was really happy with the way the series was run and I’d be happy to come back and do it again in seniors.”