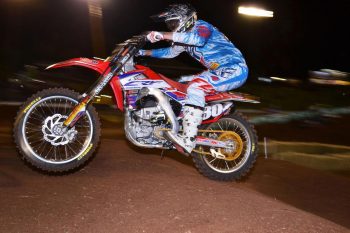 A hard packed and technical track made for challenging conditions that ultimately saw Wightman and Webster finish the all-important SX2 Final in sixth and seventh places respectively, in an event that was won by Honda-mounted American star Gavin Faith ahead of Jackson Richardson and Hayden Mellross.

With a sizeable crowd watching on, Webster got his night of competition underway in the best possible style with a start-to-finish victory in his Heat race.

“The track was really tough as the surface was bone dry and rock hard, so our Pirelli MX32 Pro tyres sure did earn their keep, and to kick things off with a win in my Heat race was just awesome!” Webster enthused.

Meanwhile Wightman battled to overcome a difficult start in his Heat race.

“I spun up off the line, so that made the Heat race pretty tough,” Wightman explained. “But I fought my way up to seventh at the finish to make sure I went straight through the Final – and it’s the Final that counts.”

When the gate dropped for the SX2 Final, both CRF Honda Racing riders were in the thick of the action.

“Compared to the previous round in Adelaide, this time I scored a much better start and pretty much managed to avoid any drama the whole race and rode consistently to finish in sixth place for the night,” said Wightman.

“The result means I now sit equal fifth in the SX2 Championship, just five points down on fourth place, so I’m pretty pumped to head to Sydney this weekend for the final two rounds of the Championship at the AUS-X Open.”

For Webster, the start of the SX2 Final saw him and his CRF250R race machine jammed up with a bunch of other riders in the first turn.

“After getting tangled up, I was way back by the time I emerged out of the first turn,” Webster explained.

“When that happens you just have to put your head down and ride as fast and clean as you can, which I did, and I got all the way up to seventh by the time the chequered flag came out.

“Overall I was happy with the way I rode and my speed and confidence is building with every round, so I’m really excited to be heading to the AUS-X Open for the final two rounds of the Championship this weekend.”

To be staged over two nights of competition at Qudos Bank Arena at Sydney’s Olympic Park next weekend (November 12/13), the AUS-X Open event will conclude the 2016 Australian Supercross Championship season.

CRF Honda Racing riders Wightman and Webster hold down equal fifth and tenth places respectively in the SX2 Championship chase and they know the indoor format of the AUS-X Open event will add even more pressure to the occasion.

“The AUS-X Open is a huge event and with the indoor track design at Homebush, starts are even more vital than ever,” Wightman offers. “So you can be sure we will be practising plenty of starts this week!”

With the Saturday night session for the AUS-X Open already sold out, the Homebush event is all set to conclude the 2016 Australian Supercross Championship in grand style.