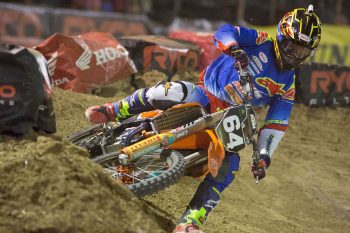 In the premier class, Dobson bounced back from youthful adventure in qualifying, as an attempt to clear the quads in one brave leap saw him exit the track at the next corner, and fall uncomfortably on the concrete beyond.

There was no sign of hesitation in the final however, as he recovered quickly from a mid-pack start, intelligently chipping away and moving smoothly forward in very difficult conditions to an eventual sixth aboard his KTM 450 SX.

Teammate Kyle Peters gained a strong start to the race but was denied his chance at back-to-back podiums, ending the night in the Race Safe truck after he slid on an upramp and connected with another rider midflight.

Peters parted company with his bike and landed on his feet from altitude, suffering bone bruising and an ankle sprain, and with his bike severely damaged as well, would take no further part in the race.

Kyle Blunden, KTM Motocross Racing Team Manager – “I’ve never seen a race track as hard-packed and technical as that. It was a lot like concrete out there, so the guys had to be super patient and careful with the amount of power they have on tap. But if you get a good start and keep putting down consistent laps it was going to show dividends in the end. Kyle did have a good start, but he slid up an upramp and came together with another rider in the air and went down. He couldn’t restart and got a sprained ankle.
I’m really impressed with Jesse, he’s improving every week, he just kept putting down laps and trying to minimise his mistakes, and came away with a sixth. He should be proud of what he was able to do on a slippery track was very unforgiving.”

Jesse Dobson (KTM 450 SX-F) – “The day started off with me going for a wild ride after trying to do that Quad. I’d gone three the lap before and got it really easily, so I thought somebody is going to try four. I tried it, but it didn’t and not too well, I ended up jumping off the berm and landing on the concrete. I played it pretty cool, but it did hurt. It didn’t affect me too much though, apart from only getting three laps of practice. I dialled in pretty fast though, and ended up sixth fastest in qualifying and third in my heat. I started the main way back, but I just tried to stick to my plan which was to just survive 20 laps, because I knew there was going to be carnage, and that’s what I did, and we ended up sixth. So it progressed a little bit in the space of a week, but it was a long 20 laps on the weekend, it was really hard-packed and you had to be really patient. I’m really excited for Oz SX Open this weekend, so I’ll come out swinging and try to finish on a good note.”

Kyle Peters (KTM 450 SX-F) – “It was a bit of a tough night for me. The track conditions were really baked so it was very slippery and the lighting was really dark. I got off to a great start, and was riding pretty well, but made a little mistake and connected with another rider in the air and ended up going down pretty hard. My hand came off the grip in the air and I whiskied off the next jump and ended up ejecting and landed off the side of the jump. It was a good one for sure, the bike was unable to finish. I was looking for another podium to sure, but that’s racing. It’s nothing too serious so I’ll be all good for Sydney. I’m really looking forward to the chance for some redemption. It’ll be a little tougher with the new guys coming into the series, but I’m looking forward to the challenge.”

In SX2 racing, Raceline Pirelli Development Team rider Dylan Wills again posted a PB, narrowly missing out on the podium in the SX2 main event, which went to Gavin Faith from Jackson Richardson and Hayden Mellross.

Dylan Wills (KTM 250 SX-F) – “A really solid night, making some big steps forward. It was good. In practice I worked it out pretty quick and I qualified P4 which was a good confidence booster. I made my heat from start to finish, and in the Dash for Cash I got past a few big boys so I was carrying a lot of confidence into the main and I used it. I got a good start in the main and was running third the most of it. I caught second and was about to challenge for second but I had a little malfunction when the map switch reverted to launch mode, so the bike was hitting the limiter at 4000 rpm. I just kind of rolled around for the last three laps and slipped back to fourth, so, it was a little bit bittersweet from that perspective, but I will take the positives and run with it.”

For more information on KTM Motorcycles, visit www.ktm.com.au or www.facebook.com/KTMAustralia