Hahn soars to another podium in Melbourne Supercross 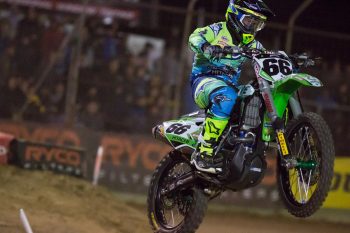 National Pump Monster Energy Kawasaki Racing Team’s Wil Hahn made his way back onto the podium with a third-place finish at the Avalon Raceway round of the 2016 Australian Supercross Championship in Victoria on Saturday evening.

Aboard the factory-supported KX450F, Hahn was on the pace from first practice at round four, qualifying second just 0.004s from pole position and went on to win his heat race once the night show commenced.

When the gates dropped for the 20-lap main event ahead of a packed crowd of supercross fans, Hahn had to work his way up inside the top three and that’s where he remained, securing his second podium in four rounds on what was a hard-packed, slick surface.

“I feel like this is where I should have been last weekend, so tonight was really good to be back on the podium,” Hahn commented. “The heat race felt strong and it was good to win that, then in the main I didn’t really get that good of a start.

“By the time I got into third, Dean [Ferris] and Dan [Reardon] had kind of checked out and I felt like I made up some ground over a few laps, but tonight was a matter of who made the least mistakes. The track made it very tough to push on.

“The result was good tonight, it’s great for myself and the National Pump Monster Energy Kawasaki Racing Team to be back on the podium and it’s a good feeling – I’m really happy.”

Mosig meanwhile also had a promising round, clocking the eighth-fastest lap in qualifying and then finishing a confidence-inspiring fourth in the heat race.

His main event was hampered by contact with a fellow rider that saw him crash heavily, however he managed to remount and charge back to seventh by race’s end. It was an improvement that he hopes will carry him into the final round with added momentum.

“I got a good start in the main and was right in the mix, then I fell into the position of around fifth or sixth,” Mosig said. “I’d started making some time on [Kyle] Peters and then he moved right over in a section and we came together.

“It was a pretty big crash, I’m bruised and battered, definitely sore, but mainly disappointed. I really wanted to get a top five tonight or even the top three, but it didn’t fall into place tonight. That’s racing, so we have to keep moving forward.”

With two rounds remaining during next weekend’s season-ending AUS-X Open inside Sydney’s Qudos Bank Arena on 12-13 November, Hahn is third in the standings – 17 points from the lead – while Mosig sits sixth, within striking distance of a top five.