What to expect over the next three weekends of AUS Supercross.

With the next three consecutive weekends hosting four rounds of Australian supercross, the series is on the home stretch to Sydney’s championship decider. The opening rounds have consisted of hard-fought battles and plenty of surprises, so for this instalment of Q&A, MotoOnline.com.au answer the burning questions of what to expect in the championship as it ticks over the halfway mark in Adelaide this weekend. A: There’s a very good chance it will, the Honda Genuine Racing rider has been exceptional in his two Australian outings of 2016, however guys such as Dean Ferris (CDR Yamaha), Todd Waters (Wilson Coolair Motul Suzuki), Dan Reardon (CDR Yamaha) and Wil Hahn (National Pump Monster Energy Kawasaki) all have the capabilities to overcome him. Sydney’s AUS-X Open will also play a major factor in this.

A: Certainly. With Chad Reed (Yamaha Factory Racing), Cooper Webb (Yamaha Factory Racing) and Ryan Villopoto (Monster Energy Kawasaki), you can almost guarantee that these guys will complete the top three on at least one of the two rounds in Sydney. This is not to say that the series regulars won’t be vying for podiums – there’s every chance they will – although it’s going to be at a greater level of difficulty than the previous rounds. The tight confines of Qudos Bank Arena will add to this, with limited passing opportunities, racers will be making aggressive moves which could result in someones championship hopes being crushed in an instant.

Q: Luke Clout has been thrown into the mix of the SX2 championship, what can we expect from him?

A: Clout received a last minute call-up to replace Jimmy Decotis at Honda Genuine Racing, and with his US deal recently falling through, it couldn’t have been more timely for the New South Welshman. Expect to see the former Australian MX2 champion mixing it up in the top three as soon as this weekend’s third round in Adelaide. Sure, he’s had limited time on the Honda CRF250R and has been on the couch since last month, although he was in a similar position earlier this year in America and excelled on his debut in Monster Energy Supercross. 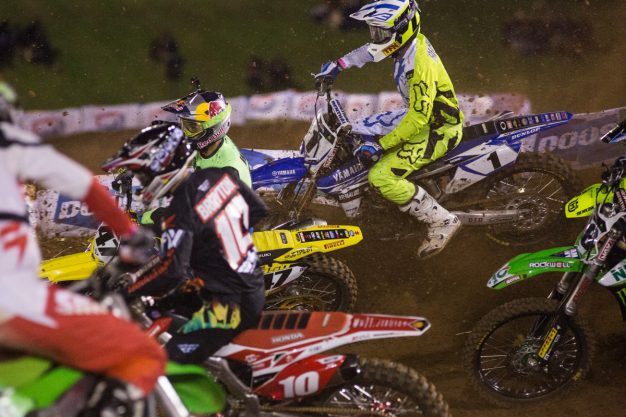 Q: Eight points currently separates the top four riders in the SX2 category, will there be a particular rider who breaks out and runs with the title?

A: It would be very surprising if a particular rider walked away with the title. Expect Hayden Mellross (DPH Yamaha) and Jackson Richardson (Serco Yamaha) to breakaway from the field and battle for the title all the way until Sydney’s sixth round, however Penrite Honda’s Gavin Faith will be in the mix despite coming off a challenging round in Toowoomba. The American needs to overcome a 19-point deficit to put himself back in control of class, and you can count on him to be a strong rider over the remaining four rounds.

Q: Jay Marmont has placed within the top 10 and top five at the opening rounds, can he reach the podium?

A: A fifth place finish at Toowoomba was a very positive result for multiple Australian supercross and motocross champion Jay Marmont, although his time to achieve a greatly desired podium is limited. Marmont’s real shot of finishing within the top three will have to be this weekend in Adelaide or the following week in Melbourne, as we previously explained why Sydney’s final two rounds are most likely out of the question. The Husqvarna-supported rider is clearly capable, however he will need some things to fall his way to land on the box.

Q: Following Toowoomba, Dan Reardon sits fourth in the championship standings – what are his chances of defending the title?

A: Reardon’s chance of capturing back-to-back titles is not as high as it was following round one, but you can never count out the reigning champion. The SX1 category is at significantly competitive level, meaning the 20 points he needs to acquire to be in the championship hunt will be very difficult to gain. Ensuring mistakes are kept to a minimum and taking advantage of the additional riders in Sydney will be critical for his title defence.