SX1 and SX2 main event victors share their thoughts on round two.

Round two of the 2016 Australian Supercross Championship headed back to Queensland where Justin Brayton (Honda Genuine Racing) claimed his second consecutive win, while Jackson Richardson (Serco Yamaha) captured his first victory of the season. MotoOnline.com.au caught up with the main event victors post-race to gather their thoughts on the night. 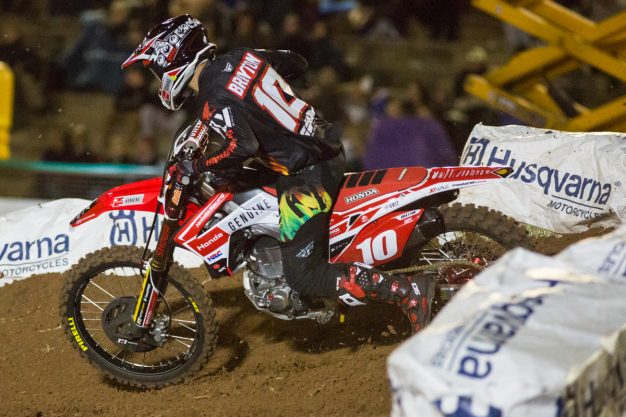 Justin Brayton, your second consecutive win tonight, you must be pleased.

I’m super happy to win the first two, I’ve been feeling good and it’s awesome to be over here. I’m really excited to be able to stay here now and not go back to the US, so I’m going to enjoy some time with the family and get in a routine of sleeping a little bit better, and also my training routine by getting back to doing a few days a week on the motorcycle to try and get in a groove to feel better for the 20 lappers. I’m stoked to get the win tonight, the track was very difficult and I just had to be very patient, especially after the start I had. I think I was 10th off the start which made it hard on me, but I’m happy to get it done.

It was quite a challenging circuit tonight, what are your thoughts on it?

It was a very challenging circuit from the whoops to the dragon-back, and there was also a really long rhythm section that you had to get every lap. It was very challenging, but like I said, I’m just happy to get the overall win at the first two, and to now get into a routine and enjoy it. I’m excited to be here, everyone in Australia has really been a pleasure to work with so far, they’ve been really nice to my family and myself, so that’s pretty cool. The races have been great and the promoters are awesome, so I’m excited for the last few.

In the main event tonight, you had to work your way through the field. How was that compared to the previous round where you were at the front and took off from there?

It was difficult, for sure. There weren’t too many passing places other than if a guy made a mistake, because we’re all doing the same thing. We were all making so many mistakes, and once we got into lappers it was really difficult because we had to roll some sections with guys down. I just kept telling myself to be patient, hit this section good lap by lap and section by section – it paid off, I got into the lead and had a pretty good gap, so I just cruised for the last five or six laps and really just tried to stay up and be consistent.

Do you think that heading back to the US between rounds to do further testing was beneficial for tonight?

I think so, I really had a solid week back there in California. I had to go back to North Carolina for a wedding, so we were travelling a lot. I’m excited to be in one place for a while to now be able to get on a good sleeping schedule and get back into routine with my training, and start logging some more laps during the week. Jackson Richardson, first place tonight, you would have to be over the moon with that result.

Yeah man, I’m definitely over the moon. It was good, I was lucky to get the opportunity with Serco Yamaha this year, so it’s good to pay the team back with a win. They obviously saw something in me and I was able to take full advantage of the opportunity and get the win tonight. I put in a big couple of weeks because I didn’t have much time on the bike at the first round, so it was good to come out here and see that all of the practice has paid off. I put in a lot of hard weeks up there, so it’s good to come away with this result, I’m stoked.

So obviously the four-week was beneficial for you in getting the win this weekend?

Yeah definitely, the track was really tricky tonight with big rhythms, a tough set of whoops and the soil as well – one corner you would have traction, the next it would be really slick. I mainly had to be patient, I tried to hit the rhythms every lap and be consistent – you couldn’t over-ride the track, it bit some world class riders tonight. So yeah, I just kept it consistent and was lucky enough to come away with the win.

The track is definitely a talking point tonight with its technicality, would you like to see a track of this calibre at the following rounds?

I mean, yeah, I might be biased because I got the win tonight. The big thing about these tracks is that it separates the really fast and technical guys from the rest of the pack – you see a lot of bike skill come into play, especially with the soil tonight – you needed good throttle control, but you needed to get on it to make the big rhythms. I would like to see more tracks like this, there was some gnarly stuff out there, like the dragons back before the finish – every time I came up to that thing I like ‘oh no!’. In the end, it ended up being really good, so I was definitely a fan of the track tonight.

We have a couple of weeks until Adelaide, is there anything in particular that you need to work on?

I just have to put in a lot of bike time, it’s good to get the win and everything, but I wasn’t happy with some of the stuff I did out there. I mainly need to work on my corner speed and stuff, so I’ll be working on that a lot in the next two weeks for sure.