Former champion seeking local and international opportunities for next year. 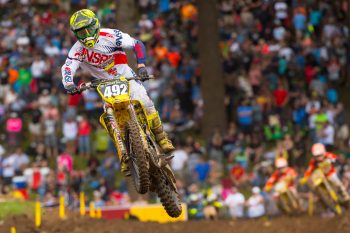 2014 Australian MX2 champion Luke Clout has revealed he no longer has a ride for the 2017 season after the MAD Racing Dirt Candy Suzuki outfit ceased operations, effective immediately.

Clout signed a surprise two-year deal with the team at the beginning of the year after initially taking on a guest ride with the squad to fill-in for the injured Daniel Baker.

The New South Welshman made an announcement via social media this evening, declaring that he is now out of contract and will begin searching for an opportunity that will allow him to continue to race motocross and supercross professionally.

“Unfortunately my team that I had signed a two-year deal with has folded,” Clout explained. “[I’m] left with nothing and I am now without a ride for 2017 in the US and also back home in Australia. I am now looking for something so I can be back doing what I love – racing my dirt bike.”

With limited vacancies available in America, it could mean that Clout’s career in the US has been cut short for the time being, although being a rider of his calibre would see him on the radar of teams locally here in Australia.

Clout intended to race 2016 with Serco Yamaha but opted to terminate his contract with them in order for him to take on a dream opportunity in America.