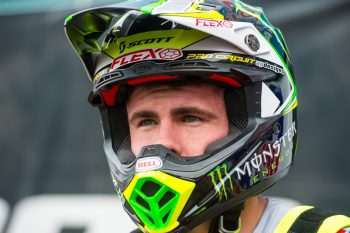 Long was unable to contest Jimboomba’s opening round after re-aggravating a thumb injury that he initially suffered earlier this year, however it has now been confirmed that the Victorian will be sidelined for the season.

Alldredge, who is only 20 years of age, will make his debut with the team aboard its factory-backed CRF450R in a week’s time at Toowoomba’s second round on Friday, 14 October.

“I’m really excited to have the opportunity to head over to Australia and join the Crankt Protein Honda Racing team,” Alldredge explained. “It’s all happened so fast, and I’ll be flying out first thing tomorrow to be with the team. Obviously there are quite a few guys from the US currently racing the championship, so I’m pumped to be lining up with them and all the Australians.

“At this stage the plan is to get over and do some testing with the team and then we’ll be straight in to racing at round two. I’m looking forward to this new challenge, and I feel very fortunate to have been offered a seat with the Crankt Protein Honda Racing Team for the rest of the season.”

Alldredge has previously raced for the prestigious Monster Energy Pro Circuit Kawasaki outfit in both the Monster Energy Supercross and Lucas Oil Pro Motocross championships. Despite showing glimpses of speed that saw him claim multiple top 10 finishes, he hasn’t confirmed a deal for 2017 yet.