DPH Motorsport’s Jed Beaton has just returned home from Europe where he initially planned to represent Australia at the Monster Energy FIM Motocross of Nations in Italy, however a training accident while over there resulted in a broken collarbone, ultimately forcing him to withdraw his entry just one week prior to the event. MotoOnline.com.au tracked down Beaton to catch up and chat about the untimely injury amongst various other topics. 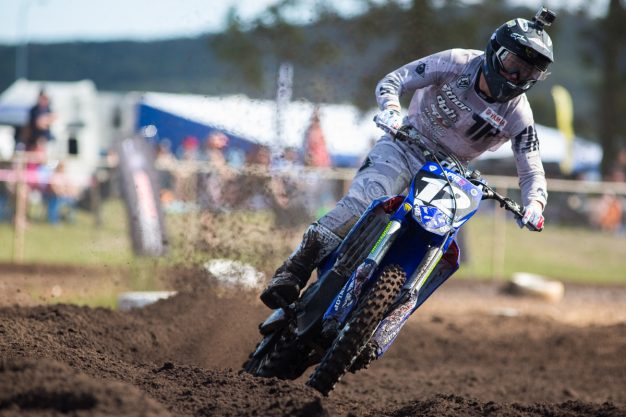 What’s been happening mate? Obviously you injured yourself prior to the MXoN, so I take it your still in recovery mode?

Yeah, pretty much. I injured myself on the Friday one week before the MXoN, so we stayed over there and watched the actual event. We flew home the following Wednesday, so I’ve just been taking it pretty easy. My shoulder feels pretty good now, but there’s just not a lot that you can do – you can’t lift anything or do stuff like that. It makes it hard to do things, so I’ve just been relaxing – it’s been a long year. It’s not a good way to have time off, but it is good to have time off.

It must have been a tough pill to swallow to miss out on such an event, so many people dream of the chance to represent their country at the MXoN and only a limited amount of people get the opportunity.

Yeah, that was a big downfall of the trip. I was pretty disappointed that I crashed and I knew straight away that I had broken my collarbone. I can’t even explain the feeling that I had, but I was just so disappointed that I didn’t really know what to do. It was a massive opportunity and I stuffed it up, but I’m going to make sure that I get back there.

You just mentioned getting back there, after being at the event itself and watching it, has it given you a greater desire to be on that level or even given direction of where you want to be in your career?

Going over and seeing that whole event, and even earlier when I went to the grand prix in Switzerland – that whole event is so professional in how it’s run, and it’s so cool. It’s definitely a goal of mine to go over there and race the world championship, that’s for sure. I know you were uncertain of your supercross plans prior to leaving for the MXoN, can we expect you to make an appearance this year?

At this stage I’m still not sure, my plan was to come back at round three even if I did race the MXoN, I was going to miss the second round anyway just to give myself a little bit more time to prepare. Now that I’m injured, I’m still not sure when I’m able to ride. I need to go see a doctor and get it all sussed out to get the go ahead before I make any further plans, so I’m still not 100 percent sure at this stage, but I could be, yeah.

Obviously you wrapped up the MX2 title this year, are you exploring options to race overseas in 2017 or are you looking to continue in Australia?

It depends on what options come up. I would like to race overseas, but at the same time it’s a big move. You don’t have to have the right opportunity, but you want to have a half decent one so you prove yourself 100 percent, instead of going over there and struggling. It’s hard to get results when you’re unhappy, you need go and prove yourself with the right people there. It’s pretty hard, but it’s definitely a goal of mine. I would really like to do a full year on a 450, I’m sort of a bigger guy and a 250 isn’t necessarily harder to ride, but I feel I would be better on a 450. I wouldn’t mind doing a year of that and seeing how I go really.

Yeah sweet, thanks for your time mate!