SX1 and SX2 main event victors share their thoughts on round one.

Following the highly anticipated opening round of the 2016 Australian Supercross Championship at Jimboomba in Queensland, MotoOnline.com.au chased down main event victors Justin Brayton (Honda Genuine Racing) and Gavin Faith (Penrite Honda) to gather their thoughts on round one. 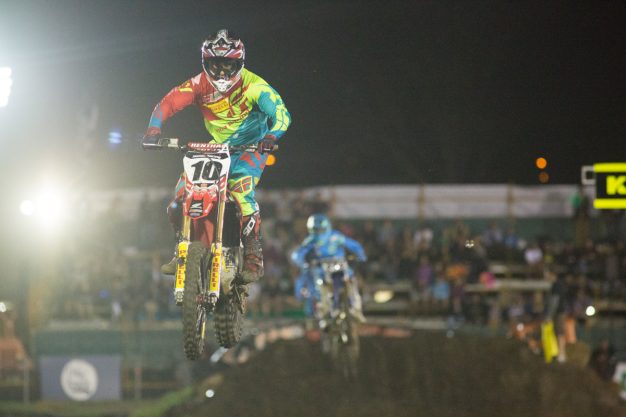 Justin Brayton, first place tonight in your first race back in Australia, talk me through your night.

Yeah, it was a pretty flawless night as far as a heat race win, I won the ‘Dash-4-Cash’ and I got an ok start in the main, I think I was fourth or fifth. I got to the lead fairly quick, I knew I needed to do that with how the track was. (Dean) Ferris kind of latched onto me and was really on me the whole time, and with a few laps to go I got a little bit of a gap where I could cruise it in. I’m so thankful to be here, I have to say a huge thanks to everyone at Honda Genuine Racing, Honda Australia and American Honda back at home for all of the help they have given me in just the past couple of weeks when it all came together – there’s no way I could do it without them. I’m really happy to get this one and get it out of the way, now I can start putting some time on the bike and build some fitness. I’m thankful to get the first win, that’s for sure – I’m excited.

Like you said, Ferris kept you honest there for a bit – was he the one you expected to do that?

Not really, I expected Reardon to be really fast, obviously. Ferris is considered an outdoor guy, but he proved tonight that he can ride supercross too. He’s going to be tough all year, but he is a world class rider, and there are six or seven guys out there that could be competitive anywhere in the world at the front of the field. He’s obviously very, very good – he’s a motocross champion over here and he’s done really well in Europe.

Obviously it’s been several years since you last raced in Australia, did tonight meet your expectations of what it would be like?

Yeah for sure, I thought it was awesome. I really just love the lifestyle here – it’s so cool and I can’t wait to bring my family over – I’ve told them about it for a longtime now. The track was great, the team was awesome and the fans are super cool here. I didn’t really know what to expect as far as results, I knew I really wanted to win but I didn’t know where I would be speed wise with the limited time on the bike. Hopefully I can improve that, and also improve my fitness. I’m looking forward to the rest of the year.

It’s also your first night racing with the Honda Genuine Racing team, how did you find it working with them?

They’ve been awesome – they’ve been first-class – everybody here has been great to deal with. My mechanic Brent came over from the US and he’s been a pleasure to work with. Yarrive, the team owner, he has been a pleasure as well – we put this together in such a short amount of time, it just proves how great of a team it really is. I’m so thankful to talk to Yarrive and get this deal done, and also for all of the support they have given me has been cool too. Gavin Faith, first place tonight and your first race back in the SX2 category – you must be pleased with your result.

Yeah, I’m super happy. The day couldn’t have gone any better – I started off as the fastest qualifier, I won my heat and holeshot the main event. I rode a solid 15 laps, so I was really happy with that. The whole team was working really hard, I’ve got to give it up to the Penrite Honda team and everyone here at Konsky – Steve Powell, Dan (Kersnovske) and Buddy Brooks. I felt really good and couldn’t ask for anything more.

Yourself and Hayden Mellross took off from the field tonight, do you see him as being a big threat this year?

Yeah, Hayden is riding really well. He’s riding good and there are a handful of guys that can win any round, so it should be interesting and I’ve just got to keep putting myself in good positions and keep riding solid. At the end of the day, the main goal is to try and get another championship, we’re a little ways from there so I’m going to take it round by round.

Is there any work that you feel you need to do between now and the next round at Toowoomba?

I’m going to be based out of Melbourne and I’ll be training with my teammates Jimmy Decotis and Adam Enticknap. There are a couple of areas I could tune-up on, but I feel really good and I’ve been training really hard back at the Carmichael farm with my trainer Clint, Jeanie and the whole crew.