Taking a closer look at the current American racing scene.

Although the 2016 Lucas Oil Pro Motocross Championship wrapped up on 27 August at the Ironman circuit in Crawfordsville, Indiana, that didn’t mean the racing was over for the year. Select American riders either elected to, or were required to contest the two FIM Motocross World Championship events on American soil at Charlotte Motor Speedway and Glen Helen circuits.

Eli Tomac was one of those riders who were required to contest both of these events due to sponsor obligations, this also meant he would make the decision to withdraw from selection to represent Team USA at the Motocross of Nations event. Tomac did receive some criticism for the choice, but the 23-year-old explained that he physically can’t race that many events in one season.

“It is tough,” said Tomac. “For me this is my thirty-second weekend of racing since January, so I had to draw a line somewhere because we also have Monster Cup,” Tomac said. “If I did that [the Nations] then it would be 10 and a half months of racing. You have to have a little bit of time to get ready for January.”

Ready to contest his final motocross rounds for the season, Tomac entered the Charlotte MXGP event and dominated the premier class. He then went on to do the same at the Glen Helen round, dominating the motos and capturing his second career MXGP overall victory ahead of a long list of very capable contenders including newly-crowned champion, Tim Gajser. 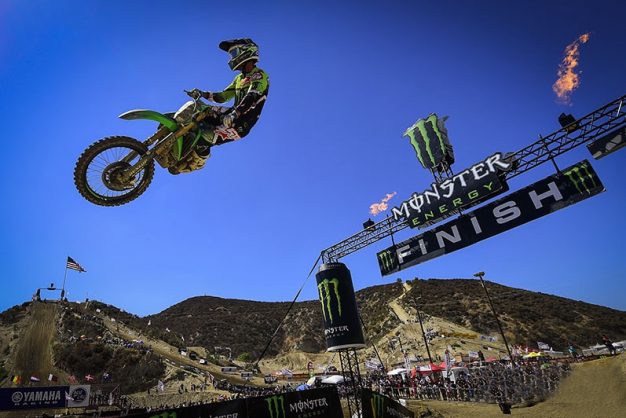 Speaking of Gajser, the young Slovenian rider will return to America to contest the 2016 Monster Energy Cup (MEC) event in Las Vegas on 15 October. Gajser has been a revelation in the motocross world coming out of nowhere to claim the MX2 title in 2015 and now the MXGP title in 2016. He has a unique, stylish and very modern riding style that could suit the hybrid MEC circuit very well and will be a great addition to the event.

“I don’t feel any pressure at all, I just can’t wait to go there,” said Gajser. “I feel like a kid at Christmas! I go with no results expectation, just to have fun and soak up the whole experience. All the team and I are really excited about it and looking forward to it so much!”

In the MX2 category sparks were flying at the Charlotte round with Cooper Webb, Jeffrey Herlings and Austin Forkner battling it out for the podium positions. Herlings wrapped up the 2016 MX2 title with a moto one victory ahead of Webb and Forkner, but it was the American riders who rebounded in moto two on their home soil.

Webb made his way to the front of the pack and pulled away for the moto two victory and the overall win ahead of Forkner and Herlings. The Webb vs. Herlings battle is one fans and media have been waiting for, and it surely didn’t disappoint. Rookie Forkner was also very impressive, in his first season as a professional this kid has shown amazing speed and maturity. 2017 should be a massive year for the Monster Energy Pro Circuit Kawasaki star.

The Glen Helen event went ahead last weekend without Webb at the line, he chose to sit out the race to prepare for the upcoming Motocross of Nations event where he will make the move to the 450cc machine. For Webb, the choice to skip the second US MXGP event was a smart one, he already proved he can beat the MX2 champion and it’s now time to move on and focus on his future in the premier class. However, Webb’s former teammate and rival, Jeremy Martin, did show up at Glen Helen with an all-new look. The former Yamalube Star Racing Yamaha rider made the move to the GEICO Honda team recently and made his professional debut at the event. Martin was unable to match Herlings’ speed during the event and was forced to settle for second in both motos. For his first showing on a new bike, with a new team, new gear, new everything, he was quite solid overall.

A notable addition to the MX2 category at the Glen Helen event was Australia’s Caleb Ward. The Queenslander made a guest appearance under the Troy Lee Designs/GoPro/KTM tent and proceeded to give it his all on track. Unfortunatey for Ward, he sprained his ankle on arrival to the US while practicing, but still pushed through for a 15-DNF result. The DNF result was due to a mechanical issue after tangling with another rider.

It was awesome to see another young Australian rider making his way to the US to put his skills to the test against a selection of the world’s best racers. This is what our riders need to do, test themselves against the best in the world, see where they stack up, then head home and continue to work towards that goal. Let’s hope more riders follow this trend and Australia’s impressive international racing results continue to build.

It’s now time for a majority of the American stars to really get stuck in to their supercross programs and prepare for the upcoming season. Plenty of riders are set to make team changes such as Ken Roczen who will head to factory Honda, Trey Canard who will move to Red Bull KTM and Cooper Webb who will join Australia’s Chad Reed at factory Yamaha. It’s a crazy time of the year for these guys and we can’t wait for the 2017 season to come around.