DPH Motorsport's latest recruit on a variety of topics.

New South Welshman Hayden Mellross has spent the greater portion of the last two years racing in the US, however the 21-year-old has returned home and will contest the 2016 Australian Supercross Championship with DPH Motorsport. MotoOnline.com.au caught up with Mellross to question him on a variety of topics for this edition of Five Questions Why. Why did you choose to race in the US for the past two years?
Just because of an opportunity that came up with Tim Ferry, and then this year with the Yamaha team that I was on. I feel that the tracks and competition over there are second to none – it was something that I needed to experience to make myself a better rider. At the same time, the expense is exactly the same [as here], plus I’m getting more out of it. So that’s probably the reason why I’ve leaned towards being in America for the past couple of years.

Why did you race well at the last three Pro Motocross rounds aboard a 450?
I surprised myself at those last few nationals, I was coming off a broken back which was probably one of the hardest things I’ve had to overcome. I wanted to race them to build some momentum for Australia, but I didn’t really have any expectations as I was coming into the end of the motocross season, everyone is going so fast and their fitness has reached such a high level – to jump into the motos and speed was pretty hard. I felt like I had a good base, getting back on the bike I didn’t rush anything and my training program was pretty solid. I just came out, focused on doing my 30-minute motos and making sure they were mistake free as possible – the tracks are that gnarly and rutty that mistakes are a killer for time. I knew if I focused on not making mistakes and putting some good laps together, I could get some good finishes. 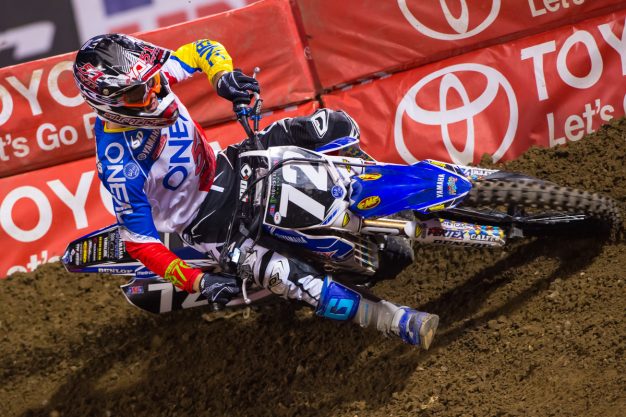 Why are you returning to Australia to race with DPH Motorsport?
I haven’t spent much time at home in Australia for two years now, and you know, there’s no place like home. To come home and see everybody, and at the same time come here and race – I think that’s a no-brainer. There’s that reason, the other reason is that this year I only raced seven supercross rounds and got injured at the eighth, then I only raced the three nationals. So realistically I’ve done 10 races this year. I felt like I had enough time off the bike that I could come straight into it and race the supercross season, gain another six races under my belt and carry more momentum and speed into possibly America next year.

Why will you be contesting the SX2 category when you have previously raced the 450 in Australia?
I had opportunities on both the 250 and 450, but in America I feel really confident and strong on the 250. I feel like I have a good shot at the championship, and if I’m going back to the US next year to race a 250 then it makes sense to technically spend my pre-season on it.

Why can we expect you to be a championship contender throughout the Australian Supercross Championship?
I feel like I’m in a great place and I’ve had a great season of learning a lot to do with supercross. I know I can’t compare supercross from the US to Australia, but I feel like I’m a smarter rider, and on top of that I feel I have more of a base fitness and speed than what I did years ago. I’m confident in myself, I know if I get some good starts I can run 15 laps every single weekend. If I do that, then there is no reason why I can’t be a championship contender.