There’s been a heap of debate on social media this week as Australian teams continue to announced they’ve signed American riders for the Australian Supercross Championship. For those within the sport, whether directly or not, they’re asking why our privateers haven’t been selected. But for fans, they’re seemingly thrilled to see US riders coming to contest the series.

It’s a hard one and, honestly, there probably isn’t a right or wrong answer in all of this. The fact is, as sponsorship becomes increasingly difficult to lock down and manufacturer support is minimised, results and maximum exposure – even on a global level – are what these official teams require. The majority of them are operated by private businesses with factory support.

On the other hand, I can understand why privateers can become disheartened in some ways, but it’s not as simple as gaining a factory seat and the results coming immediately – just look at the year Wade Hunter had outdoors after he finally made the move from being a top privateer to factory rider at Serco Yamaha in MX2. He finished higher in the standings last year.

That’s a very minor example, however racing is full of politics and decisions are certainly made in extremely calculated ways. What is looking great though, aside from all the drama, are the fields. Between the Aussies and internationals we have a heck of a lot of great riders and teams behind the start gates.

It was heartbreaking to see KTM’s Kirk Gibbs injured in supercross preparations this week. It was exactly what he didn’t want to do, but that’s the sport we’re in. We wish him a speedy recovery and also look forward to seeing him represent Australia in the following years.

Also, keep an eye out this weekend for one of the biggest in off-road all year. The Australian Off-Road Championship will be decided in Victoria, as will the World Enduro Championship – go Matty Phillips! As for me, I am joining Guy Streeter for a 12-hour mountain bike race locally, so should be a good one. Here’s Spence with more… It’s almost time for the supercross season to begin and as always, the last-minute preparations and final touches are going down for privateers and factory riders around the country. At the same time riders such as Dean Ferris, Jed Beaton and new addition to the squad, Todd Waters, are juggling the awkward position of having to be ready for both motocross and supercross events.

With Kirk Gibbs bowing out of the 2016 Motocross of Nations (MXoN) event, all eyes were on Waters to fill his shoes, and sure enough the Queenslander confirmed with MotoOnline.com.au this week that he will indeed head over to Maggiora, Italy.

In speaking with Waters, he was quite upset that fellow MX1 contender and good friend, Gibbs, was injured and unable to make his first appearance at the prestigious event. Waters is definitely one of the most approachable and down to earth riders on the Australian motocross circuit, so it wasn’t much of a surprise when he began to talk about the emotional day it was when Gibbs unfortunately broke his femur. They may be fierce competitors on track, but when it’s all said and done, these guys are good mates who enjoy riding their motorcycles – that’s what it’s all about when it comes down to it!

Waters will be a great stand-in rider for Gibbs, there’s no doubt about it. His MXoN experience and MXGP experience combined, not to mention the fact that he claimed a podium finish at the Maggiora circuit, will really come in to play on 25 September.

Finally, as production manager at Foremost Media, I got the call late Wednesday afternoon to head down to Jay Marmont’s training facility to shoot photos and video for the factory KTM squad and their new rider for the supercross season, Kyle Peters. The American import and the KTM guys put together a last-minute deal and I think it’s very exciting for the 2016 supercross series and the Austrian manufacturer. We were shooting on only his second day on the bike and he already looked super comfortable, be sure to keep an eye on this guy at round one.

That’s all from me this week, have an awesome weekend everyone! Here’s Jeremy… 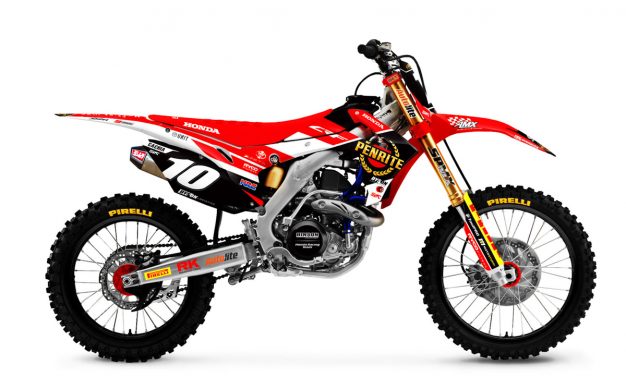 With the Australian Supercross Championship opener just one week away, we have seen a large amount of teams finalise their rosters this week, which is obviously strange in a way because most teams should have signed up their riders at the beginning of the year. However, with riders out injured and the addition of Yarrive konsky’s supercross team, we have been inundated with team announcements.

Konsky’s Honda outfit is looking to be one of the strongest teams this year that consists of four US riders – Justin Brayton (SX1), Adam Enticknap (SX1), Jimmy Decotis (SX2) and Gavin Faith (SX2). Josh Cachia will also receive support from Konsky, which is understood to be a satellite deal under the Penrite Honda banner. There’s never a dull moment when Cachia’s around, so it’s exciting to see him return to professional racing.

It was cool to hear earlier this week that Caleb Ward will contest the final round of the FIM World Motocross Championship this weekend at Glen Helen, which also marks his debut on the international stage. It’s an awesome opportunity for the Queenslander, and very well deserved. He will be aboard factory Troy Lee Designs Red Bull KTM, so he has every chance to be competitive with the world’s best.

This week I pieced together a Rewind feature on Luke George that looked back on his championship-winning season in 2008. It was pretty crazy to look at the riders in the field of that year, with much of Australia’s current top athletes only in their rookie season!