Looking back on a phenomenal year for the New South Welshman.

In light of Luke George’s recent success at Newcastle’s FIM Asia Supermoto event that saw the 26-year-old dominate an international field, we’re taking a look back at his championship-winning season in 2008 that would see him claim the national Pro Lites title.

The category in 2008 was stacked with future Australian champions, with names such as Ryan Marmont, Dean Ferris, Kirk Gibbs, Matt Moss and Ford Dale all lining up as some of the youngest riders in the class. Placing 11th in the championship one year prior, Kawasaki Racing Team’s George entered the season as an unlikely championship favourite.

While lacking experience, George had youth and ability on his side. It was those exact characteristics which led KRT team manager Brett Whale to sign the up and coming rider: “I’m excited to be working with our new prodigy Luke George, he has a tonne of ability and a huge future ahead of him.

Setting the bar high, George was confident in himself in the lead-up to the championship. “I’ve got big expectations for 2008,” he stated in a team announcement, ultimately delivering on them. At round one of the MX Nationals in Tasmania, the 18-year-old surprised the industry after capturing his maiden victory in the category while also grabbing ahold of the red plate. 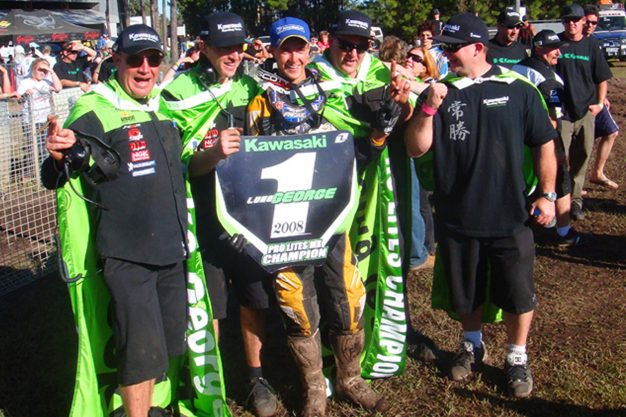 Entering round two with the championship lead, George would fall short of the podium and complete the weekend in fourth. It would mark the beginning of a series of mixed results for the New South Welshman, landing on and off the podium over the next seven rounds.

Despite the inconsistencies, the addition of two valuable race wins at Conondale and Wanneroo allowed George to maintain the championship lead for the entire duration of the nine-round series. He held a comfortable gap coming into the final round at Coolum, racing to a responsible fourth place finish to wrap up the championship nine points ahead of Adam Monea.

“I’m so happy for Luke, he’s such a gutsy and talented rider,” Whale stated following Coolum’s finale. “I can’t remember the last time, if ever, a Pro Lites rider has held the red-plate for the entire series, and 18-year-old Luke, who could be racing in the Under 19s, has done just that.”

Unfortunately, one year later the defending champion would suffer a horrific crash at the very same place that he clinched his first and only professional championship, which resulted in injuries that saw him fighting for his life. It was only a matter of months before he would recommence racing at a professional level, contesting the 2010 MX Nationals series and opening rounds of the supercross championship. However, at age 20 he would announce his retirement from the sport.