DPH Yamaha rider to focus on Motocross of Nations in Italy. 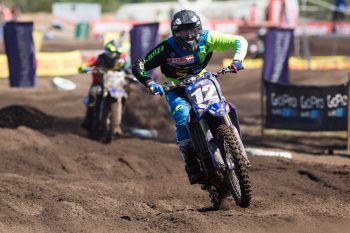 Newly crowned MX2 national champion Jed Beaton has opted out of contesting the opening round of the Australian Supercross Championship due to take place at Jimboomba in Queensland on 17 September.

After being selected to represent Australia at the 2016 Monster Energy FIM Motocross of Nations, Beaton has decided to focus solely on the prestigious event rather than prepare for the supercross series in which he plans to take part in on his return.

The DPH Yamaha rider confirmed to MotoOnline.com.au that he will fly out to Europe two weeks in prior of the MXoN in order to ensure he will be adequately prepared for the event that will see him take on the best riders in the world.

“I think I head over on September 12, so I get rid of the jet lag and get do some riding,” said Beaton.

“I’ll be missing the first round [of supercross], and once I get back we’ll see what the go is from there and just make a plan after that.”

The 18-year-old struggled to find form in his rookie supercross season last year, however he maintains that contesting the series is beneficial to him.

“I’d like to do it, it benefits my riding so I’m looking forward to that also,” he commented.

The FIM Motocross of Nations is scheduled to take place at the conclusion of next month on September 24-25.