Listing the elements expected to play a part in this year's series.

With just two rounds remaining on the 2016 Motul MX Nationals calendar, it’s crunch time for championship contenders, only four motos remain before the champion is crowned in all three classes. In this edition of Top 10, we take a look at a list of factors that can play a large role in the end result following moto two at Coolum Pines Motocross Track on 28 August. 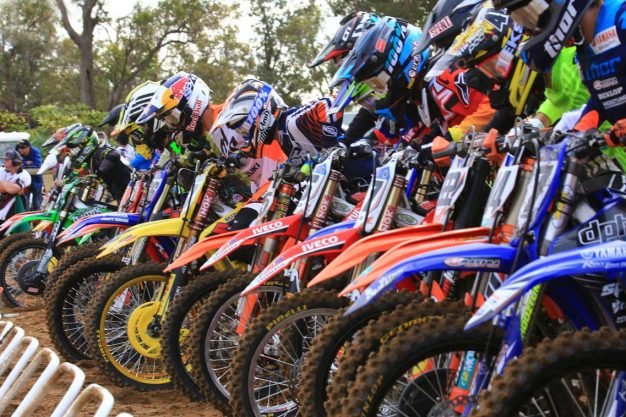 1. Wins:
The guys in contention just need to win, it’s that simple. The best way to earn yourself an MX1, MX2 or MXD championship is to go out there and win every Super Pole and every moto left in the season. If you do that, you’ve left nothing on the table and it’s all on your contenders to chase you down. Racers have a tendency to play it safe in the midst of a championship battle, but it will be the one who can hang it out and remain mistake-free that really has the best shot at the title from this point.

2. Starts:
Starts are by far the most important aspect of any race and when it comes down to the wire in a tight title battle, they become the most valuable asset to your racecraft. If you can pull a good start, or even a holeshot, and give yourself strong track position, you’re instantly ahead of the game. All it takes is for you to snag a holeshot and your closest rival to start dead last – instantly you’re in a great position to gain a huge amount of points thanks to just that start alone. That’s especially important when the guys at the front are so close.

3. Super Pole:
The GoPro Super Pole is an interesting aspect in the MX1 title race, although it doesn’t pay round points, it does pays championship points – three for a win, to be exact. Entering the final two rounds of the season, you can gain an extra six points by logging the fastest time in each of the five rider showdowns. That’s a huge amount of points to gain, especially if your closest contender fails to make the cut within the top three.

4. Training:
Who has configured their training program to ensure they are at peak performance this late in the season? It’s a known fact that riders struggle to find the correct program that will allow them to remain strong for the whole season and push through the final rounds. The riders who can push the limits comfortably during these final two rounds will shine through if they combine this with solid starts.

5. Weather:
As we’ve seen multiple times during the 2016 Motul MX Nationals series, the weather can play a huge role in the overall championship result. Jed Beaton, for example, is a rider who excels in muddy conditions and has now captured the MX2 win at all three of the damper events this year. We obviously have no control over mother-nature and that dreaded rain (or in Beaton’s case, welcomed rain) really can shake things up – Caleb Ward is still trying to claw his way back from his Broadford disaster. 6. Equipment:
We’ve seen equipment failures play a large role in this year’s title battles and unfortunately it’s something the riders cannot control – even mechanics can’t control these issues at times! Something simple like a flat tyre could completely ruin your title hopes and we all know it doesn’t take much find a nice square edge to pinch your tube on. Let’s hope mechanical issues don’t play a part in these final events, but it’s always something that needs to be considered.

7. Red plate pressure:
Some riders deal with pressure better than others, it’s just the way it works, but it’s guaranteed that the red plate increases the amount of pressure 10 fold. Who can handle the added weight of that red background best? Is entering the final round with the red plate easier than trailing by just one point? It’s hard to say, we’re not out there racing, but this will surely play a huge factor in each championship result.

8. Tracks:
Certain tracks favour certain riders, not every rider is going to love all 10 events on the schedule. We’re heading to two completely different tracks for the final two MX Nationals rounds in Toowoomba and Coolum. Toowoomba features a tacky and relatively hard-pack surface with plenty of elevation. Coolum on the other hand is a sand track with no elevation whatsoever – the two couldn’t be any more different if they wanted to be. Some riders also get the chance to ride these tracks more than others, so for example, Nathan Crawford will have spun a lot more laps on these tracks compared to rival Jed Beaton.

9. Penalties:
Those track markers and numerous flags are there for a reason, riders can easily give up valuable points due to penalties. We’ve seem it happen this season, most recently in Shepparton where both Wilson Todd and Nathan Crawford were docked 15 seconds in MX2 moto one, allowing Jed Beaton to take out the win. This was a critical error for Crawford who held the red plate at that stage, each and every point is precious right now so abiding by the rules is a must!

10. Mistakes minimised:
It seems simple, but riders need to avoid mistakes. Most recently it was MX1 title contender Dean Ferris who made a mistake on the final lap of moto two at Shepparton, which allowed red plate holder Kirk Gibbs to claim a timely moto and round victory. Those small unforced errors can really make life hard when battling for a title and you can guarantee it will occur more than once during these final two rounds.