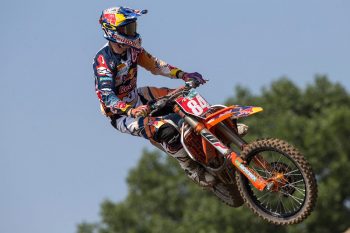 Red Bull KTM’s Jeffrey Herlings is almost certain to sit out a third event of the 2016 FIM Motocross World Championship and miss this weekend’s grand prix of Switzerland to recover fully from his right collarbone injury.

Herlings cut a quiet and frustrated figure as a spectator last Sunday at Lommel in Belgium as his once 169 point lead in the MX2 series was sliced further by runner-up Jeremy Seewer and now rests at 87 with four races and 200 left to win.

The Dutchman re-fractured a bone that he’d originally broken in Germany last year and then damaged further two weeks later with another crash in Sweden. The plate was removed in the winter and while the 21 year old convalesced from his dislocated hip, but the collarbone was malformed and was a fresh injury waiting to happen. He duly suffered again while contesting a round of the Dutch Championship last month.

Under doctor’s advise Herlings was urged to give more time after another reparation. Staff at Red Bull KTM were mindful of the problems due to Herlings’ premature return in 2015, and thanks to his 12 GP wins in a row and 23 from 24 moto victories he had a cushion to remain away from the MX2 gate.

Herlings will allegedly start to ride his 250SX-F in the days after the grand prix at Frauenfeld next week in order to be ready for his home grand prix at Assen at the end of the month and then the American flyaways to end 2016.

In 2014 Herlings lost a third MX2 title by just four points after holding a 145 lead at one stage. In 2015 he reached 138 points ahead before the campaign-ending hip ailment.