Overall MX1 and MX2 victors share their thoughts from Victoria.

Shepparton was another important step toward the 2016 Motul MX Nationals crowns for Kirk Gibbs and Jed Beaton, holding the red plates with two rounds remaining. MotoOnline.com.au caught up with both winners post-race in Victoria to see how their day went. 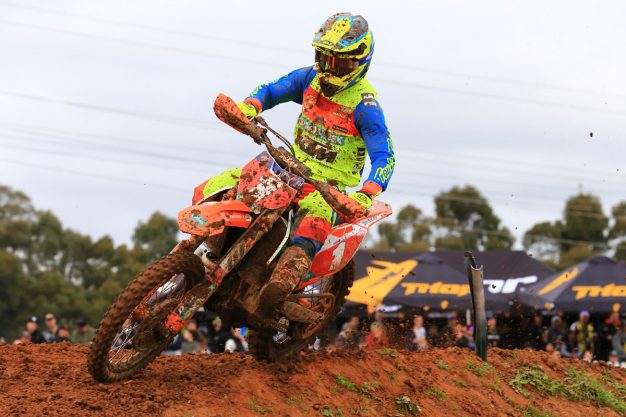 Here with the overall winner at Shepparton, Kirk Gibbs. Really good result, probably a surprise there in the last lap when [Dean] Ferris crashed. What was going through your mind when you saw Dean was down and you were able to go through?

Yeah, obviously just a big mistake on his behalf, he still had a little buffer. I was reasonably close, but yeah, by that time I thought the race was done and dusted. But I guess it’s the old saying, it’s not over until the fat lady sings. When he went past me he was moving, so I just tried the best I could, to stay as close as I could. A little bit of pressure helps along the way. It’s obviously frustrating for him, but I’ll take the win. I really needed it after the last couple of weeks, with my knee and the way things have been going, so it’s good to keep chipping away at this championship and take it one week closer.

The guys up at the front are obviously going really, really fast right now. In terms of the front-runners in the championship, what does the pace on the bike feel like compared to last year?

Every year I think you get a little bit faster, but for me I think I have stepped up more again, only because I knew I had to. I knew the challenges were going to be so big. Obviously riding with Todd [Waters] during the week has helped, I seen the way he was going so fast, so it gave me a good gauge in what I needed to do. Todd and Dean are so fast, it’s just who can put it all together and get great starts and not make any mistakes. First moto I was really disappointed, a lot of arm-pump and I couldn’t really do much with that, but the second moto I felt like I rode 100 percent and really strong. Dean was moving, but obviously that little mistake cost him.

How important are the starts considering how close you guys are?

Definitely important! Obviously in that second race Todd had a bad start and he couldn’t really get up there with us. Then me in that first race I didn’t really get a great start either, I just wasn’t quite there to make it up, obviously with arm-pump didn’t help. So yeah, it’s so critical right now, everyone is so fast. There is only a couple of tenths in it, so we are just pushing real hard and trying not to make mistakes.

These final two rounds at Toowoomba and Coolum will be on back-to-back weekends, so what’s the plan between now and then?

Just routine. Just hit routine every time and don’t change anything – everything seems to be working and going well, so yeah, just keep it the same as always and go from there. 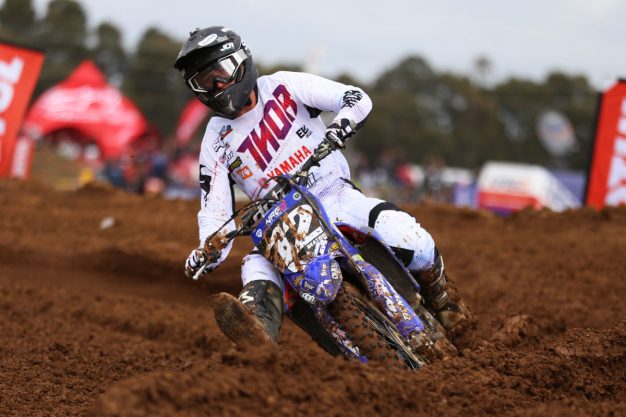 Jed Beaton with the MX2 overall here at Shepparton, it was a good result for you and now you’re tied for the points lead. You must be really happy.

Yeah, I’m pretty happy with today, a lot better starts in both races and the track was tough, so you needed to put yourself in a good position straight away. So I feel I did that, I just tried to get the best day that I could do. Unfortunately that last moto, I let Caleb [Ward] pass, but that was just from a small error and that was all on my behalf. He was riding good, I was trying to stick with him, but it was just really hard to find a spot pass. Today was good.

Really rutty conditions and there were a few soft spots, so do you have to be patient in those types of conditions?

Yeah, you have to be a lot more patient than normal. Everyone thinks I’m a mud rider at the moment, but today wasn’t muddy and I showed them that I still had the speed. I’m pretty happy about today.

So you’re heading overseas this week?

Yeah! I fly out tomorrow morning at 10:00am, so I’m really looking forward to that, going over there to see what it’s all about and hopefully, I don’t know yet, but hopefully I can race the Switzerland GP. We should find out when we get over there, but I hope so.

In terms of the timing of that, you’re obviously on a good run here in the MX Nationals. Are there any concerns of that upsetting your momentum or your standard program?

No, not really. I think it’s going to be beneficial to me and go there to learn what it’s about and try learn the speed. If anything, I think it will be beneficial, so I’m really looking forward to it!

No worries, well thank you and well done!