Five standouts from the rain-soaked Conondale and Broadford rounds.

The 2016 Motul MX Nationals series has seen two of the country’s iconic circuits turn into complete mud rounds, revealing several impressive performances in the challenging conditions. MotoOnline.com.au counts down five of the top performers from Conondale and Broadford throughout all three championship categories. 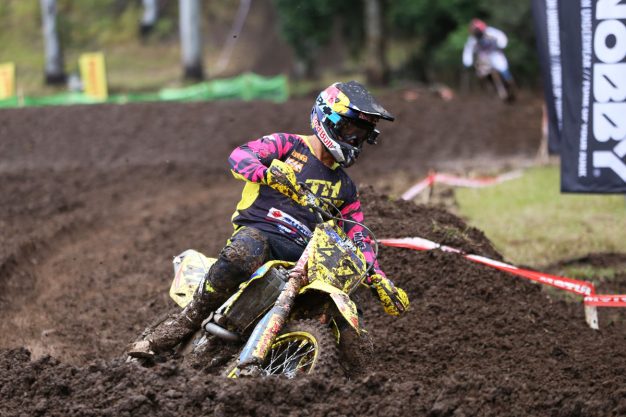 5. Mitch Evans (MXD):
Yamalube Yamaha-mounted Mitch Evans turned his results around at Broadford, racing to an impressive 1-2 scorecard to claim his first overall of the season. When the MX Nationals rolled into his home state of Queensland last weekend, he was yet to stand on the top step of the podium since round three in Victoria. Under similar conditions, he displayed two commanding performances throughout both motos, dominating the MXD category to capture another overall victory.

4. Todd Waters (MX1):
Todd Waters has solidified himself as one of the country’s top riders in the difficult mud conditions that we have seen this year, however at both rounds a poor moto two result has denied him the chance of securing an overall win. He raced to the opening moto win at Broadford, crossing the line 24 seconds ahead of Kirk Gibbs in second, but an incident in race two saw the former MXGP rider salvage fourth, for third overall. At Conondale, it was a very similar scenario for Waters – he would control the opening race, but a first lap crash in moto two forced him to settle for third. His results were enough to award him the runner-up position.

3. Kirk Gibbs (MX1):
Coming in at number three, defending MX1 champion Kirk Gibbs narrowly edged out Todd Waters for the spot. Gibbs remained consistent at Broadford with a pair of seconds, rewarding him with his first overall victory since displaying the number one plate in 2016. When the rain hit Conondale, it caused the circuit to become excessively slippery and littered with deep ruts, which is not ideal for the KTM rider who is currently nursing a painful knee injury. Despite what looked like a gloomy day ahead for Gibbs, he scored a conservative fourth in race one, climbing up the order in the second moto to finish just eight seconds behind race winner Dean Ferris and concluded the day in third. 2. Dean Ferris (MX1):
CDR Yamaha’s Dean Ferris has remained the most consistent MX1 mud rider throughout rounds three and seven, claiming the runner-up position at Broadford and capturing his second-consecutive overall victory at Conondale. The ex-MXGP regular put his experience to use at both rounds and, in particular at Conondale, where Todd Waters and himself outclassed the category in the opening moto, completing the race well over a minute ahead of third-place holder Kade Mosig.

1. Jed Beaton (MX2):
Topping this month’s Countdown feature is fan favourite and DPH Yamaha rider Jed Beaton. The MX2 talent has excelled in the toughest conditions the series has provided this year, capturing two very assertive victories at both Conondale and Broadford. Beaton took home a clean-sweep in Victoria, crushing the MX2 category and rewarding himself with the championship lead at the time. When the series headed to Queensland, the Tasmanian delivered on expectations, working back from a poor start in moto one finish in second, to then stretching out a 20-second lead in race two before grasping the win.