Conondale’s always one of the most popular stops of the Motul MX Nationals calendar and after a year away, the series returns this Sunday. Last year it was originally part of the schedule until a later change saw the series visit Coolum twice, however this year we’re back.

You could say that the Sunshine Coast is somewhat of a home for the MX Nationals, one of the favourites for everybody in the national series, and the locals really get behind Australian Motocross, whether it be at Conondale or Coolum.

Round seven is usually one of the more decisive rounds of the season. It is at this point of the year where every lap of every moto really starts to play on the minds of the championship front-runners – any slip could prove costly.

And if you can gain a good result this weekend, firmly put yourself in the mix for number one, the run home in the title-chase becomes a three-round race for glory. And considering MX1 defending champion/points leader Kirk Gibbs is carrying a very real knee injury, this weekend will be telling in how he’s going to finish out the season. 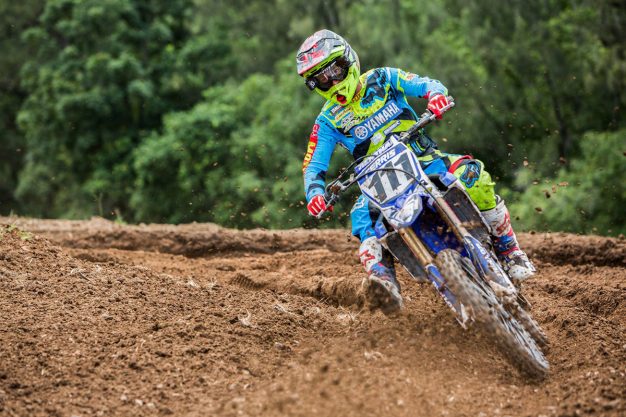 With Gibbs carrying an injury, but cleared to race-on in the series, and Todd Waters (Wilson Coolair Motul Suzuki) frustrated following Nowra, you’d have to think Dean Ferris (CDR Yamaha) is in the box seat to take control right now. Those three and Matt Moss (National Pump Monster Energy Kawasaki Racing Team) are all within 28 points of eachother though, so it’s wide-open still.

Then again however, Gibbs soldiered on at Nowra and if he can withstand what pain there might be moving forward, he will be relentless in a bid for a second-straight championship. And what a result that would be for him against former internationals Ferris and Waters, as well as multi-time champion Moss.

This will be the second time for many contenders to race at Conondale this year as at the beginning of the year Ferris swept the Conondale Cup ahead of Moss’ teammate Kade Mosig and Moss himself. As for the MX2, Wade Hunter (Serco Yamaha) won the overall from Jake Moss (National Pump Monster Energy Kawasaki Racing Team) and Caleb Ward (KTM Motocross Racing Team).

It’s going to be a fascinating back-part of the MX2 title chase as Ward continues to apply pressure to red plate holder Nato Crawford (Husqvarna), while Jed Beaton (DPH Motorsport Yamaha) is still right there in the hunt. Only 11 points separate the trio!

That’s it from me for this week, I’ve got to quickly get this posted and head to the airport for a flight, so here’s Adam Spence with more ahead of the weekend’s action…

I’m excited for this weekend’s round seven of the 2016 Motul MX Nationals at Conondale for multiple reasons. First reason? The weather in Sydney of late has been less than desirable, I can’t wait to head north and find some warmth. Those Queenslanders do have it good year round when it comes to the weather. Might even get to bust out some shorts on Sunday!

Next up, and probably one of the more popular features of the event, ‘The Extension’! That jump is absolutely huge and for me personally as a video guy, I’m always excited to shoot riders hucking stupidly large obstacles. Not only that, but the fans love that section of the track and really get vocal about it, something I would love to see more of in Australia.

Speaking of getting vocal, as I’m making my way around the circuit at each event, I’m always pumped to hear any fans swinging over the fence and cheering for their favourite riders. Let’s get vocal and support our riders!

Yell, clap, scream, blow your air horns, do whatever you can to pump up the riders and the fans around you – you may even find yourself making an appearance in the next MotoOnline.com.au highlights film. Okay, now that I’ve got my inspirational paragraph out of the way, back to the reasons why I’m excited for Conondale. The third reason that this round will be rad is the fact that it’s the retro round, who doesn’t love a bit of retro style? It’s always great to see the teams put together old school graphic and gear combos for this event and I can’t wait to see who does it best in 2016.

On that note, coming off the back of Nowra’s military round, I have to make a mention of how awesome it was to see everyone getting involved. It was great to see so many teams and riders running military themed gear and graphics, those BBR Yamaha ‘Bomber’ graphics? They took the win in my eyes, such a rad concept and it looked awesome on track.

Finally, and this one isn’t really a plus, but more of an interesting aspect of the event; roll offs. The Conondale round carries a strict roll off-only policy, meaning riders must make the switch from traditional tear off systems for the event.

This has proven to cause havoc for riders in past years as the roll off systems do tend to fail more often than tear offs. So it will be interesting to see who has their roll off system dialed in and who will run into vision problems during the event.