The 2016 Lucas Oil Pro Motocross Championship is stacked with talent in both the 450 and 250 categories, the depth of talent in each field is remarkable. To be one of the three riders to step onto the podium at the end of each round is an impressive feat, in this latest edition of Rated we take a look at six of the most prominent podium threats across each class at this point in time. 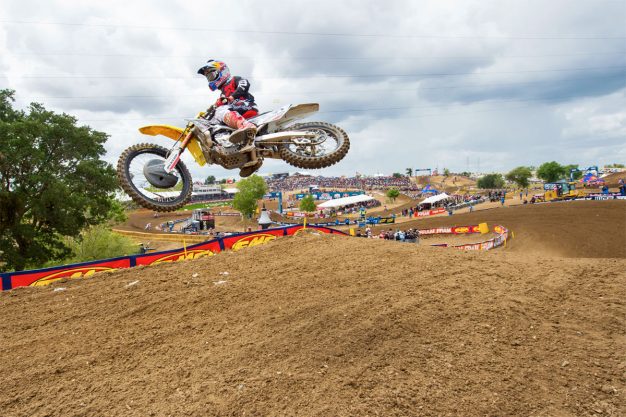 Rider: Ken Roczen
Rating: 10/10
Rundown: The RCH Soaring Eagle/Jimmy John’s/Suzuki rider has been thoroughly impressive throughout the 2016 Lucas Oil Pro Motocross Championship. After seven rounds of racing, Roczen has five overall wins to his name and two second place finishes, one following a fork issue in Glen Helen and the other at Southwick where Eli Tomac dominated the event. The German rider is by far the most dominant rider in the premier class this season and currently holds the 450 Class red plate heading to round eight.

Rider: Joey Savatgy
Rating: 7/10
Rundown: With four overall podium finishes to his name, Monster Energy Pro Circuit Kawasaki’s Joey Savatgy currently sits second overall in the 250 Class points chase. An early leader of the series with multiple overall victories, Savatgy is a strong podium threat at each round, but his consistency will need to be addressed if he wants to hold a similar rating to Webb in this instance.

Rider: Eli Tomac
Rating: 8/10
Rundown: On the podium at all but one round, the Monster Energy Kawasaki rider has a consistent podium threat at each and every event. Tomac has recently turned up the heat and made one of those six podium appearances a trip to the top step after lurking in the shadows of Roczen during the first six rounds. It’s clear Tomac has found his groove and these consistent podium performances won’t be changing any time soon. Rider: Jeremy Martin
Rating: 6/10
Rundown: Multi-time series champion and current defending champion Jeremy Martin has been hot and cold in 2016 when it comes to podium finishes. With just three podium finishes to his name during the 2016 Lucas Oil Pro Motocross Championship, the Yamalube Star Racing Yamaha rider is not meeting expectations set by his past performances. Although Martin has not been a constant podium finisher, his raw speed and high fitness level mean he is a serious threat at all times.

Rider: Marvin Musquin
Rating: 4/10
Rundown: Red Bull KTM’s Marvin Musquin may not have the long list of podiums that Roczen and Tomac have tallied up over the first seven rounds, but he has been quite consistent and currently sits third overall in points. During that time the French rider has scored himself just one overall podium finish, but the 450 Class rookie surely has more in the tank. As a former mulit-time MX2 World Champion, Musquin will be one to watch as he progresses in his premier class career.

Rider: Cooper Webb
Rating: 9/10
Rundown: The Yamalube Star Racing Yamaha rider has missed just one overall podium finish over the opening seven rounds of the 2016 Lucas Oil Pro Motocross Championship despite recovering from a wrist injury early-on. Webb has taken control of the 250 Class with a string of strong results in recent rounds, capturing the series leading red plate and cementing himself as the man to beat in the hotly contested category.