Taking a closer look at the current American racing scene.

The great outdoors. It’s always a refreshing change to see some wide open, fast-paced battles after a long supercross series. Don’t get me wrong, supercross is awesome, but there’s something about motocross – it’s where the true warriors of the sport shine through. There’s no hiding out there, if you haven’t put in the work, it’s going to show very early on in the piece.

Now seven rounds in to the 2016 Lucas Oil Pro Motocross calendar, we’re starting to see who will battle it our for both the 450 and 250 Class titles. It always takes a while for riders to find their groove, dial their settings in and find their place in the pack. Luckily for some, they find that early on in the year and gain valuable points right off the bat, but for others it’s just not the case.

In the 450 Class it was Ken Roczen who clearly found his groove right away and made great use of that. Roczen dominated the premier class for quite some time, looking untouchable at certain stages against some of the fastest racers on earth – incredible stuff. But as we all know, it’s only a matter of time before other riders start to figure it out and make a run to the front. Monster Energy Kawasaki’s Eli Tomac was slowly chipping away in the background as Roczen dominated out front. Muddy Creek saw Tomac make a real push and actually put a lot of pressure on Roczen, it was at that point Tomac clearly knew he could get the job done in the near future. Fast forward two events to Southwick’s seventh round and look what happens!

Tomac was on another level on the sandy circuit, it was a performance that brought back memories of his early 2015 performances before a gnarly crash at Thunder Valley forced him out of the remainder of the season. At that stage Tomac was aboard a Honda CRF450R with GEICO Honda and many asked if he could do the same with Kawasaki – question answered? I think so.

Let’s hope Tomac can continue his strong form and Roczen can bring the heat at each and every round. There’s nothing worse than watching riders run away with moto wins, we want to see the best riders battling it out at all times. Round eight in Millville is another slightly softer round, could we see Tomac excel once again, or will Roczen bounce back and land on top of the box? It should be an exciting round that’s for sure.

In the 250 Class things have been as wild as always, this class continues to bring intense battles and sketchy moments all day long – it’s awesome! Yamalube Star Racing Yamaha’s Cooper Webb has really cemented himself as the man to beat after a slightly slow start to the year. Joey Savatgy, who at one stage controlled the series and looked seriously strong, has really dropped the ball and he nows sits 37 points back in second place. 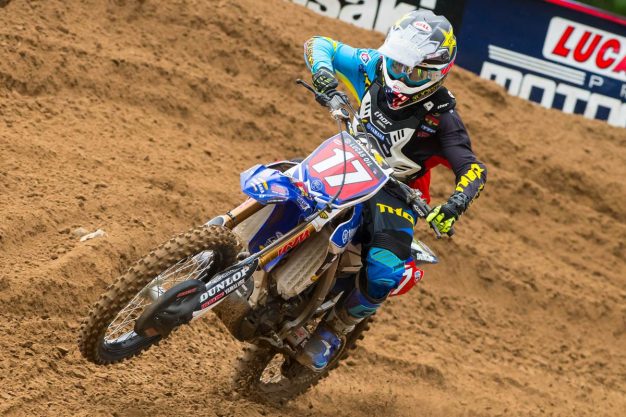 Webb, a two-time Western Regional Monster Energy AMA Supercross 250SX champion, is yet to capture an outdoor title. He’s gunning for this year’s championship; you can bet he wants it badly before making the move to the premier class in 2016. And to think Webb kicked off his outdoor season still recovering from a wrist injury sustained during supercross? This guy is the real deal.

How about rookie Austin Forkner? Part of the Monster Energy Pro Circuit Kawasaki squad, Forkner has been super impressive in his rookie season. Just 17-years-old, he has been right in the thick of things and riding with a surprisingly mature approach. Yes, he has shown signs of being a rookie, but overall for his first professional season, he’s absolutely living up to the hype with a career-best third overall at Southwick.

In the Australian department, we’re down to just two riders in Lucas Oil Pro Motocross, Jackson Richardson and Luke Clout. Both 250 Class contenders have actually been very close all season long, but where they have been isn’t exactly where they would like to be. Between them just 28 championship points have been scored, 16 for Richardson and 12 for Clout.

Each rider has been building over the seven rounds and should slowly push their way through the field, but could this be a sign of just how deep the talent is in this class? Both Richardson and Clout are no slouches, but they’re still pushing for consistent top 20 moto finishes, it just shows how fast these riders are. It’s no joke out there, Pro Motocross is jam-packed with world-class contenders from first to 40th.