Saturday morning here and we’re in office putting the finishing touches on the regular work week before heading off to Nowra for round six of the Motul MX Nationals. Entering the series’ second half, we’ll be at the business-end of 2016 in no time.

There are so many storylines to keep on top of, so many riders who will be eager to turn their seasons around, and a number of title threats that will be aiming to keep their momentum from the first half. And keep in mind, three of the final five rounds will be in Queensland.

Adam Spence will speak more about what’s to come and what we can expect below, but there’s little doubt we’re entering another nail-biting finish to the MX Nationals championship, from MX1 through to MX2 and MXD. And as usual, we’ll be covering each and every round at the venues.

Before I hand this over to Spence, I just wanted to touch on the ‘Alpinestars Weekender’ digital magazine that we here at Foremost Media published during the mid-season break. It’s our first attempt at this type of thing and we’re definitely pleased with the end result. And thank you to the crew at Alpinestars Australia for the opportunity to get it done.

We’re working on a number of exciting things behind the scenes here to keep evolving and to continue publicising the sport here locally, while also further increasing return to our loyal supporters of the site. Stay tuned! Here’s Spence… The mid-season break has come to an end, it’s time to return to the track to see who can continue their form, who can turn their seasons around and who used their five weeks off best. The Nowra event is an interesting one for most riders to return to, it’s one of those tracks that receives mixed reviews.

Personally, having spun some laps on the circuit during my junior days, the surface is definitely something you need to get used to and the layout is obviously very tight. But as they say, it’s still dirt, there’s still jumps and everyone has to ride the same track – it’s all about who can ride it the best!

Riders who can remain smooth and get the power to the ground, yet hang it out as wide open as possible, tend to have success in Nowra. Last year’s MX1 winner, Dan Reardon, is a prime example of the style of rider who suits the track. Smooth, effortless style, yet not scared to hang it out and push it to the limits if necessary.

It sure will be an interesting round in the premier class for a number of reasons. Defending champion, Kirk Gibbs, is feeling strong and leading the championship chase, he’ll be a tough one to beat this weekend. Then we have National Pump Monster Energy Kawasaki’s Matt Moss who enters his home round eager to steal this win away from his contenders more than ever. 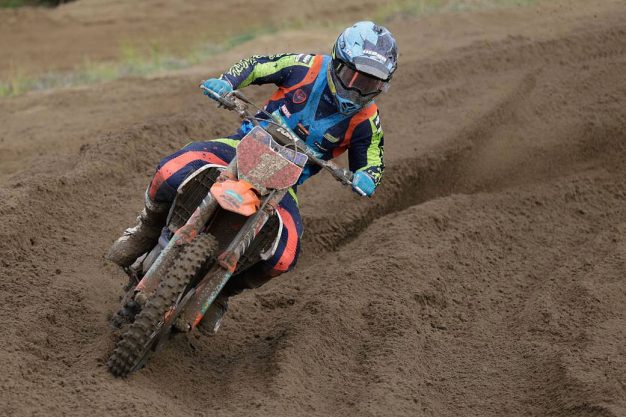 The next factor is Dean Ferris. Is he really back at 100 percent fitness after that scary crash in Western Australia? And will the lack of track time in Nowra hinder the returning MXGP contender’s performance? The same can be asked about Todd Waters, he is in a similar situation to Ferris as he too spent a considerable amount of time touring the European scene in recent years.

My guess is that won’t bother either of these riders. They’re world class motocross racers and familiarising with tracks isn’t anything new to them. The Nowra circuit may actually play into their favour being hard, slick and tight, some European tracks tend to share those same characteristics – you never know, these guys might be stoked on the circuit.

In the MX2 category it will be interesting to see how the added weight of that red plate weighs on Nathan Crawford. You may as well place a huge target on your back when you mount those red backgrounds, it’s sure to place a tonne of pressure on the riders who have made it to that position.

One rider who will have his eyes firmly set on Crawford is Caleb Ward, he’s still battling back from his Broadford disaster and won’t stop until he’s back on top. So while he has had a fair share of challenges, it’s going to result in a tight finish to the season.