Privateer MXD rookie making a run for the 2016 championship.

Hailing from Newcastle, New South Wales, 17-year-old Cooper Pozniak has kicked-off his Motul MX Nationals career with a list of strong and consistent finishes in 2016. Weighing in at just 52 kilograms, Pozniak isn’t someone you would expect to see throwing a 250cc four-stroke around on the roughest tracks in Australia, but he does just that; and quite well may we add.

Entering the 2016 season as a privateer with KTM Australia, KTM Newcastle and Lusty Industries as his primary supporters, Pozniak had minimal experience at a national level and hoped for top 10 finishes at best. Little did he know, he was about to surprise himself on debut in the MXD category with an impressive second place finish at Horsham’s season opener.

“It’s a lot different, the tracks are so much rougher and the format is completely different,” Pozniak told MotoOnline.com.au. “I did a few of the rookie rounds last year when I was still a junior and that was good to get a feel for what it’d be like – it is a lot different, but I really like it.

“I’ve had a solid season so far, I was only expecting to get a top 10 coming in to round one, I just wanted to do my best and see where I was at. I’ve definitely surprised myself, now that I’m sitting third in the championship and being that close to the lead it’s really good.” 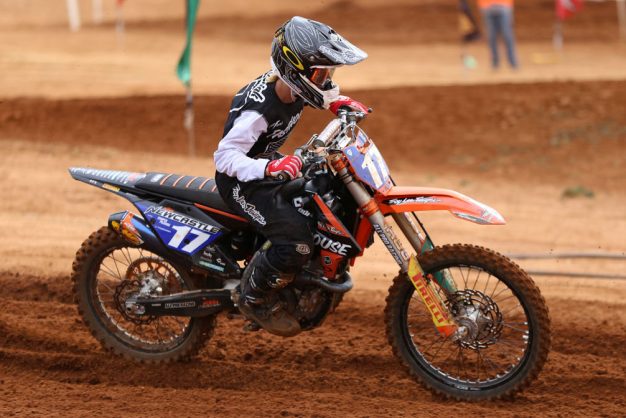 After four rounds of MXD competition, Pozniak sits just 32 points behind series leader Connor Tierney and seven points behind second place rider Wade Kirkland. The rookie is taking a mature approach to the series and plans to make a run at the title with a further five rounds scheduled on the 2016 calendar.

“We’ve still got a lot of rounds left and a lot of races to go, so I’m definitely going to take a shot at the championship,” he said. “I wasn’t expecting to be this close to the points lead, but now that I am, I may as well just go for it.”

Although Pozniak has remained quite consistent throughout his rookie season, Broadford’s third round of the championship marked his lowest finish of the year. After taking a seventh place overall home from the sloppy Victorian round, he feels he has his bad luck out of the way and has his sights set on moving forward and claiming race wins following a productive mid-season break.

“I had a tough round at Broadford,” said Pozniak. “I knew that I’d have one tough round in the season and I got that out of the way there so that was good. I’m just looking forward to moving up and trying to get a few race wins now.

“The mid-season break has been good and I feel the best I’ve ever felt so that’s awesome for me. I didn’t take this as a break, I just trained the whole time with Dylan Wills and I’ve done a fair bit of riding at Nowra. Myself and Willsy have put down some solid laps, it’s been really good.” Part of Pozniak’s program has been focusing on building his body mass in order to be stronger during the second motos as the track gets tougher. Although he admits his small frame allows him to rocket out of the gate a majority of the time, in all other areas of racing he feels that it is a definite disadvantage for him out on the track.

“It’s definitely hard being small, I’m definitely one of the smallest in the class,” he explained. “The only advantage for me is off the start, being so light I can get a good start most of the time. But it’s a disadvantage at the end of the day when it gets rough and I’m definitely struggling in the second moto so I’m working on trying to get bigger at the moment.”

At just 17 years of age and a rookie in the development class, the KTM 250 SX-F mounted contender plans to remain in the MXD category for 2017. For 2018 a move to MX2 is on the cards where Pozniak wants to make his mark and capture a championship before chasing his dreams of racing in the United States.

“We’ll see how I go this year in MXD, but the plan at the moment is to stay in MXD for another year,” he added. “Then I want to move up to the MX2 class in 2018 and hopefully get a championship there. If I’m able to get a championship here my goal is to head over to America, so hopefully it all works out for me.”