If you have never owned or ridden a KTM 300 EXC, then you probably don’t know what you’re missing out on. Within minutes of throwing your leg over it, you wonder how you ever got by without it in your life. It is easy to see why this KTM is one of the most popular off-road bikes on the market. Lightweight, great handling, a motor that is either happy to be lugged around using its bucket loads of torque or revved out on the fast, flowing trails.

KTM has thrown out the previous generation of EXC off-road machines and started from the ground up with a new chassis, new motor and new suspension, as well as a whole heap of smaller improvements to the range to make your time out on the trail a whole lot easier. Let us start with the small stuff first, before we jump into the more obvious changes to the MY17 bike.

The 2017 300 EXC has had a slight change in plastics and ergos. KTM has gone back to an all-orange plastic surround for the headlight, which can now be removed without the use of any tools, added in a little bit more plastic on top of the front fender and added a grab handle integrated into the rear fender to prevent you grabbing a handful of dirt/mud when you’re manoeuvring the bike around when you’re stopped out on the trails. ODI lock-on grips have been added for 2017. They’re not something that are terribly important, but with the direction KTM is heading with the rest of the bike, it just seems smarter. Who likes messing around with grip glue or wiring your grips on anyway? KTM has also managed to integrate the front brake line with the speedo cable, joining near the headlight all the way to the fork leg. Incorporating them both really just aids in problem prevention.

KTM has developed new ‘No Dirt’ footpegs, which are designed to prevent dirt build-up. They’re also 6mm higher than the SX models, which helps with a little extra ground clearance. It’s not something the average rider is probably going to notice or feel uncomfortable about, but if you are a taller rider you can easily swap them out for the SX model. KTM has developed a No Dirt shift-lever as well, which is to prevent dirt being forced into the elbow of the shifter. These are two things that don’t really improve on performance and you probably wont really even care until you encounter such a problem.

The seat has also been manipulated to be more comfortable and flatter, with up to 10mm of the seat being reduced in some areas. The last few bits finishing off the cockpit of the MY17 300 EXC are the Brembo brakes and hydraulic clutch. Brembo has long been stock equipment on KTM range, giving great stopping power front and back, as well as providing a really good, light feel on the clutch. The MY17 Brembo rear brake has been refined slightly to give the rider better feel and function of the bike with a slightly shorter pedal and a smaller diameter piston. 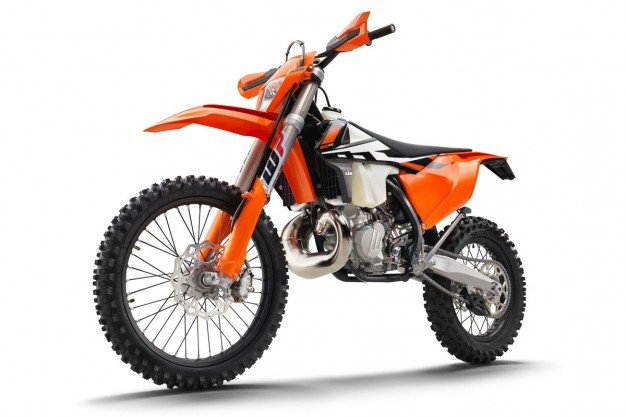 KTM has redesigned the airbox to improve flow and prevent the air-filter being installed incorrectly and causing damage to the engine. It’s also designed the filter cage so it can be fitted in a multi-directional manner, helping the user to install the filter correctly. The MY17 300 EXC now uses a 9.5-litre tank, which is opaque/white, helping you see exactly how much fuel you have left on board. The tank is one litre larger on the two-stroke EXCs than the four-strokes, with a new fuel line connector, which will help prevent any tree branches snagging on your fuel line.

Moving onto the main component that has allowed KTM to improve on the 300 EXC handling by centralising the mass of the bike, changing the stiffness of the frame to work better with the new WP suspension – the chassis! The chassis has been redesigned to accommodate a more compact engine, as well as allowing the mounts for the swingarm and WP shock to be brought 5mm closer to the centre of the frame, providing the rider a more symmetrical feel.

KTM has also stiffened the chassis side to side to improve rider feedback and improve manoeuvrability in corners, while making the frame more forgiving front to back, which improves the 300 EXC’s ability to work with the suspension and reduce rider fatigue. KTM has also worked with WP, which has introduced the WP XPlor 48mm, 300mm travel fork and XPlor PDS shock for 2017. WP has produced the new suspension package to compliment the MY17 KTM’s weight reduction and overall performance, as well increasing rider friendliness. 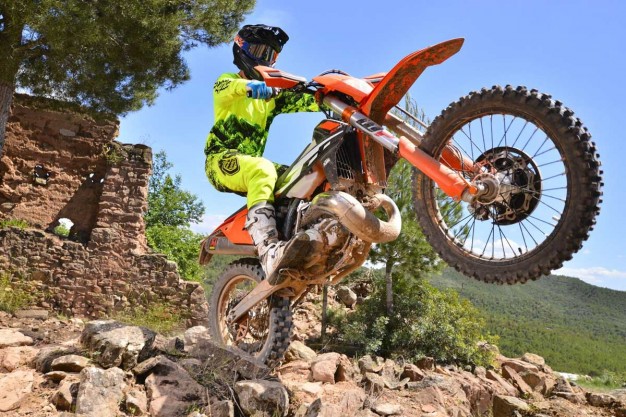 The most obvious change you will notice with the WP fork is that while it is spring in either fork leg, the compression is on the left fork leg and rebound is on the right. Both can be easily adjusted at the top of each fork leg with a rider friendly clicker adjustment that can be used out on the trail with no need for a flat-head screwdriver. And if you are really keen, you can also get a pre-load adjuster, which can be purchased through KTM, giving you a total of three different pre-load settings. WP’s further developed the PDS shock, reducing overall weight by using a slightly narrower piston diameter, now 46mm rather than the previous 50mm. The length has been reduced by 2.5mm as well and the internals of the shock now feature a floating piston, which is forced into a cup closer to the end of the travel to improve bottoming performance.

The 2017 KTM 300 EXC has more torque than you will ever need in almost every instance. The engine really loves to be lugged around and has plenty of top-end power. Everything from the engine casings inwards has been redesigned, making the 300 EXC engine stronger and lighter than ever before. The addition of a counter-balance shaft has been placed in the MY17 motor to reduce vibration by up to 50 percent and improve rider fatigue.

KTM has changed from a Keihin carburettor to the new 38mm Mikuni TMX option for 2017. The flat-slide design allows the power to be delivered far smoother and in a more controllable manner. This also helps with the two-stroke problems of jetting for altitude and temperature differences. Putting the power to the rear wheel, KTM’s incorporated a six-speed transmission with the same ratios as its predecessor. Why mess with something that was spot on in the first place? The MY17 300 EXC is kicked into life with either the conventional kick-start or the use of an electric start with a new and improved compact Lithium-ion battery for reliable starts every time. 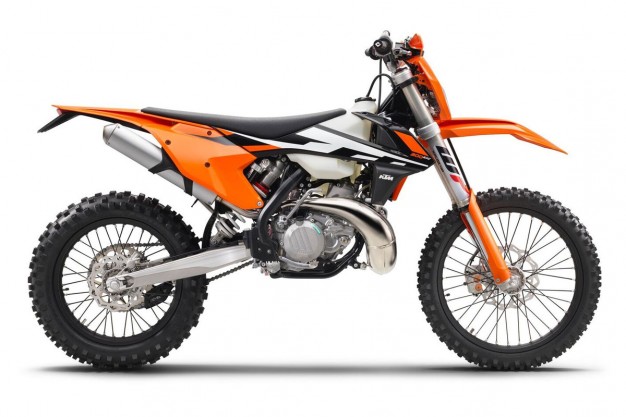 On the 12km enduro loop in Les Comes that KTM set up for us, we had everything from tight single trail and fast, open fire trails to really get a good feel for MY17 300 EXC. It is really clear why the 300 EXC is so popular amongst Australian off-road riders – the bike really performs well on both tight and open trails. After riding it for the first time, you can really notice the lack of vibration. It’s a little unnerving to start with because you are not normally accustomed to a two-stroke not causing loose fillings in your teeth to vibrate out, which you will notice in your hands as well. It took a lot longer for my hands to feel numb holding onto a two-stroke.

The MY17 300 EXC is 2.1kgs lighter than before, making the handling of the bike better than the previous model, as well as having the mass of the bike more centralised, so you can really take full advantage of its strengths. The suspension is plush over the small, sharp bumps, while remaining forgiving and stable over the larger hits on rocky terrain. The ease of changing the clickers for compression and rebound on the trail on the fly is great. I am not really one to chase the perfect set-up on every part of the trail, but I know a few people that will loose their minds at the fact they can now change it that much easier.

The general feel of the MY17 300 EXC is really natural and the components that KTM has worked on to improve your riding experience. It’s an extremely clever package that will no doubt go a long way toward keeping KTM toward the top of enduro sales charts in all kinds of categories. They’re that good and continue to get better with each model update.

The 2017 KTM 300 EXC will be hitting Australian shores at the end of July/early August this year with a price tag to be announced. Further information on KTM’s complete range and specifications can be found on its official website at www.ktm.com.au.