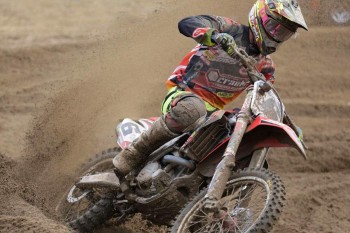 The issue first became a serious problem at the season opening round in Horsham where the 2015 MX2 champion over jumped an obstacle and has since suffered from a lack of grip and ongoing pain.

In a bid to turn his rookie MX1 season around, Wilson had the injury attended to as soon as possible following Wanneroo’s fifth round of the season with hopes of a return at Nowra’s round six on 3 July.

“Everything went pretty well,” Wilson told MotoOnline.com.au. “The surgery went a little bit longer than expected because the bones floating around in my wrist were actually attached to some scar tissue, so that had to cut that out and clean it all up. All of the pieces of bone have now been removed and the scar tissue they took out should free the wrist up some more too.

“The surgeon is happy with how it turned out and I’ve already been to physiotherapy today, we’re just trying to get some movement back in the wrist so I can be back on the bike for Nowra.”

Initially Wilson and the Crankt Protein Honda Racing team were expecting a four-week recovery leaving him one week’s preparation before the Nowra event, unfortunately that week of preparation may be cut short after surgeons confirmed the injury was worse than first expected.

“Going into surgery the plan was that it’d be a four weeks and I’d be back on the bike, but we’ll probably be pushing for time now,” he added. “Once the surgeon got in there and saw what was going on, it was a little bit worse than he thought. “I’m still expecting to be back for Nowra, but I won’t have much time on the bike heading into the event. We’re sort of playing it by ear now and we’ll just have to see how the physio goes and keep making a plan as the time goes on.”