Western Australia’s fifth round of the Motul MX Nationals is upon us and with that, it means we’re also at the halfway stage of the 2016 championship. It feels like just a couple of weeks back we were on the way to Horsham for the opener, but as seems to be the norm these days, time’s flying by.

It’s the series’ bi-annual trip to Wanneroo this weekend – I’m actually writing this somewhere between Sydney and Perth on VA555 – and the first time we’ve been west since 2014. It could be one of the most important rounds of the entire championship.

If you have a strong weekend before the mid-season layoff, it places you in a strong position to advance over the time ‘off’. And championship positions mean a lot at this point of the year – you simply cannot afford many bad days from now, especially considering the consistency of those in the top spots at the moment.

And we really don’t know what the sand will bring in WA. Murray Bridge’s South Australian stop of the season last weekend is also recognised as a sand round, but it’s not truly sandy like we’ll witness at Wanneroo. This will be a real challenge for some, while others will literally soak up the opportunity. 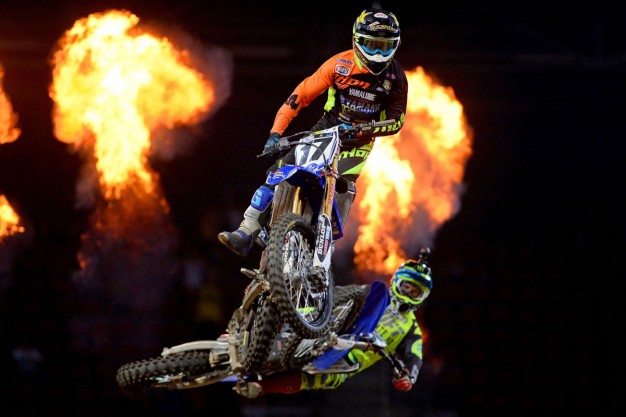 There will be the chance for locals like Dean Porter and Kyle Webster to shine on Sunday, however to off-set that minor advantage, Williams Event Management is hosting a couple of practice sessions per class today, just to help riders gain comfort and a reasonable setting.

It’s positive to take the series to Western Australia for a variety of reasons as the industry is very active over there, not to mention the fact that KTM Australia and HQVA (Husqvarna) are based in WA. And next week, although it’s not a championship, a lot of the top riders will stay on for the prestigious Manjimup 15,000 event.

In other major news this week AUS-X Open organisers confirmed that Ryan Villopoto and Cooper Webb will be joining Chad Reed for the 2016 running on 12-13 November. And what’s more, RV is actually racing, which is a mega announcement for the sport locally.

Consider that he’s a four-time Monster Energy AMA Supercross Champion between 2011 and 2014 before heading to MXGP for a year and then retiring altogether, we’d never imagined that he’d be coming to Australia to race the complete event.

And when you think about just how competitive Ricky Carmichael was last year at the 11th hour in the limited laps he ended up doing, there’s no reason why Villopoto in that type of environment won’t be supremely fast. It’ll be an incredible event to witness once again, there’s no doubt about that.

That’s it from me for this week, I’ll hand this over to Adam Spence for his take on the week gone by and the weekend ahead…

It’s hard to believe we’re already at the mid-point of the 2016 Motul MX Nationals season, those first four rounds just flew by. Speaking of flying, my Moto 360 contribution for this week is being put together while I currently move at approximately 860km/h at an altitude of 12,190 meters en route to the sands of Wanneroo in Western Australia.

Horsham, Appin, Broadford and Murray Bridge have been action-packed events in each and every category so far. We’re truly seeing just how deep the talent is in each class for 2016 and it’s an awesome spectacle to watch. Unfortunately for myself, I’m out there focusing on my shots more than the actual racing itself, but I’ve been trying my best to keep an eye on the battles during each moto. It’s an interesting thing being on track filming a national motocross event. Some may think I’ve got the best seat in the house, but it’s actually quite a difficult task to stay focused on creating quality video content and stay in touch with exactly what’s happening throughout the field. With this weekend’s event featuring a three-moto format, it’s more than likely going to be even harder.

That’s definitely not a bad thing though, the three 20-minute motos should create tighter racing, more battles and less chance for the riders to spread out. This may not appeal to all the riders out there, but it will cater to riders who prefer to sprint rather than start slower and pick up the pace throughout the moto. For the fans it’s certainly a win, who doesn’t like seeing tight and intense battles all day long?

Personally I can’t wait to see how the round pans out. It’s quite an important event for the riders in terms of making their mark on their respective class before the series takes a five-week break. In both the MX1 and MX2 classes the series leader and second place riders are separated by just one point – it will be a huge confidence booster to whoever leaves Wanneroo with that red plate.

In the MX1 class it’s Dean Ferris who lost the red plate to defending champion Kirk Gibbs at round four. It was Ferris’ first finish off the overall podium in South Australia and he will be doing all he can to claw his way back into the lead. In the MX2 class Nathan Crawford is lurking behind Jed Beaton in the points chase. Yet to win an overall, the Husqvarna rider has been super consistent and you can bet your bottom dollar he will be shooting for that series lead and all-important confidence boost before the break.